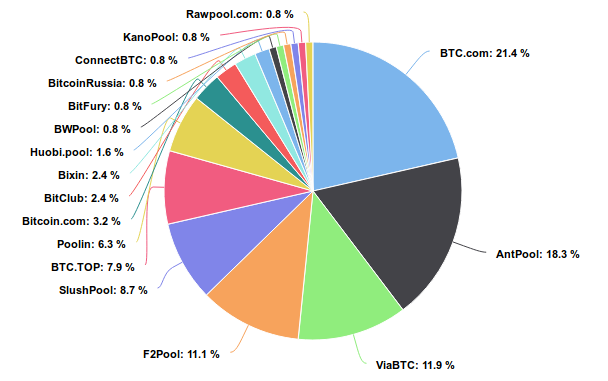 Huobi, a company that is best known for operating the third-largest crypto exchange in the world, has reached another high point this week. On Tuesday, the company’s mining pool climbed through the ranks to compete with some of the largest mining superpowers.

Huobi Pool briefly became the tenth-largest Bitcoin mining pool on September 25th, as measured by hashrate. Huobi Pool’s share of the hashrate has fallen slightly over the past few days, but the platform has managed to remain among the top 10 largest mining pools.

Although breaking into the top ten ranks is a significant achievement, Huobi Pool nevertheless has earned a fairly small slice of the pie.

Bitcoin mining is dominated by just a few pools. Five mining pools control about 75% of the total Bitcoin mining hashrate, and two of those have ties to a single mining corporation, Bitmain:

This means that although Huobi is currently the tenth largest pool, it only controls about 1.5% of Bitcoin’s total mining hashrate. Huobi is certainly breaking its own record, though: the pool’s current share of the hashrate is significantly higher than it was when the pool launched in March.

Suggested Viewing : Learn how to transfer cryptocurrencies from Coinbase to Binance.

Mining Bitcoin independently is no longer practical, and this has led many miners to join mining pools. Pools operate by allowing miners to share their computing power in order to more effectively mine Bitcoin. Essentially, pools allow teams of individual miners to compete with large mining centers and share the rewards.

Each pool has its own payout scheme, but Huobi has introduced its own token, the Huobi Pool Token (HPT). Miners in the pool receive this token in addition to their standard Bitcoin payout.

The launch of this token seems to have attracted miners and mining power. Apparently, the token is responsible for Huobi Pool’s rise through the ranks: the company claims that the pool’s hashrate has risen by 50% since they introduced the token in August.

Although Huobi is better known for its gigantic trading platform, which is reaching new markets and acquiring other companies, it seems Huobi’s mining pool is growing rapidly as well.