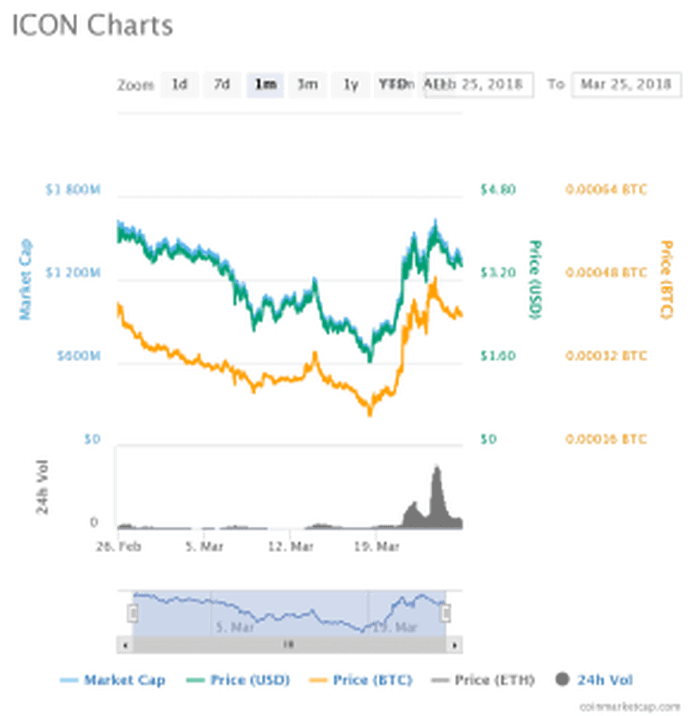 ICON (ICX)  – was most certainly one of the best performing cryptocurrencies in the top 100 market cap this week. Soaring higher than 70% after being listed on one of South Korea’s biggest exchanges, Bithumb, the ICX token seems to be one of the stronger coins in the mix right now. Soon to be listed on more major exchanges like Upbit, this coin potential has yet to be reached. Sudden overnight surges like this remind us why many experts are quick to predict that 2018 could possibly be the year we see a $1 trillion market cap. One week ago, this coin was trading at $1.59. As of right now the coin is currently trading at $3.54 according to Coinmarketcap.com. ICON’s vision to “hyper connect the world” is slowly manifesting as more people jump into this project with excitement.

Referred to by many as the “Korean Ethereum,” ICON’s plan isn’t to compete with any other blockchain platform but instead to build with others to create synergies. ICON is developed from P2P network, consensus algorithm, and implements a smart contract platform of its own. ICON provides a smart contract platform that runs on containers without the VM and supports real time transactions by implementing Loop Fault Tolerance (LFT) with Byzantine Fault Tolerance (BFT).

The ERC20 token is scheduled to be swapped with the ICX coin sometime in March 2018. Once this process begins, ICX ERC20 tokens can be used to make transactions; but eventually it is said that all ERC20 tokens will be burned and no longer usable. Therefore, the team at ICON is gong to leave ample time for everyone to swap their coins before its too late.

ICON is in the process of working with public and private institutions and sets out to connect entire economies with this platform – all the while doing this with strong scalability and quick transactions. ICON plans to connect private and public institutions in a way that no other cryptocurrency has done, leading many analysts to believe that this coin could eventually dominate the market.  With a massive consolidation taking place, now seems like the perfect time to set up a smart portfolio.

By allowing blockchains to communicate with each other, on top of already allowing corporations and anyone within an economy to create their own blockchain, ICON is capable of being a top 10 contender cryptocurrency that can help run the entire global economy. Already huge in South Korea, on of the biggest markets for cryptocurrency and tech in general, it is only a matter a time before this coin goes worldwide. Once this happens, the $3 price it is at right now would be a dream.

With trading volumes on the rise, it is no telling what will happen leading into April. With the over all market hovering around $300 billion, there is still a lot of room for growth in all aspects. With that said, now could possibly be the best time to get in on the action. But as cryptocurrency market shows us time and time again, volatility is certain, and what is up one day could be down the next – but ICON seems like a golden long term hold

The team at ICON has made some public announcements regarding plans of a new storage wallet and an airdrop. ICON is set to give free ICX tokens to ICONex ICX wallet users. Emails have been sent to those verified addresses that qualify for the drop. The tokens distributed in the drop will be main net ICX coins and not ERC20 tokens. These coins can only be received through the ICONex ICX wallet.

The ICONex wallet is the official wallet of the ICX cryptocurrency and it is now officially available. The wallet is available as a Google Chrome Browser Extension for PC users. The Android and iOS versions are to be released soon. The wallet stores ICX main net tokens (not ERC20 tokens) and includes features like transfer, storage, and seed backup. However, the ICX tokens in circulation are ERC20 tokens that can be transferred to the ICONex wallet by sending tokens to an ETH wallet address. To access the wallet, holders of ICX can click this link: https://icon.foundation/?lang=en and click on the tab that says “Wallet.”

ICX is used as an intermediary cryptocurrency – an interchain blockchain that connects various blockchains such as Bitcoin and Ethereum.  ICX enables transactions among different cryptocurrencies by determining the exchange rate through DEX Reserve. ICX can be used as for DApp tokens – U-coin, which is a DAPP developed by ICON’s blockchain team for Korean University Consortium, can be one of these use cases already in development.  ICX can also be a token for an ICO platform like ERC-20. ICON is one of the largest blockchain networks in the world and boasts independent blockchains comprised of reputable institutions in major industries.