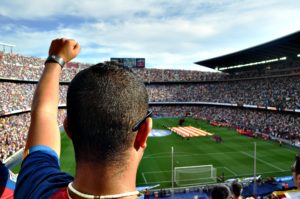 In the conservative world of professional sports, one thing that has constantly been evolving and changing has been the relationship between sports organisations – clubs and governing bodies – and fans.

It’s telling that the area where sports have benefited the most from technological advancements has been the relationship with the fans. Yes, the development of new racquets has improved the quality of tennis matches, but is that comparable to the impact that televising events has had on the sport? Better equipment and modern training methods have allowed athletes to perform better on the football pitch, but is that really more important than social media giving clubs the ability to engage with a truly global audience?

In theory all of those things should be important, but in reality, sports are such a fan-driven form of entertainment that other aspects of the industry are often overlooked in the frantic race for bigger audiences. So it’s not really surprising that so many blockchain projects are targeted at sports fans.

One look at the ‘Sports’ category on ICOMarks, an independent platform for ICO analysis and research, shows that, aside from sports betting ICOs – which also cater to a specific need of sports fans – the most well-funded projects listed there are aiming to improve the fan experience in some way.

One project, SportFix describes itself as “a rapidly growing over-the-top (OTT) business in Asia streaming local and international sports events to millions of fans”. The project, which has so far raised $2 million from the sale its SportsFix Tokens (SFT), allows users to vote on what sports events they want to watch and pay only for the content they prefer watching. According to a white paper, the platform also allows users to earn SFT by visiting a digital stadium and interacting with other spectators. Closer to home, the London Football Exchange, which raised a whopping $71.3 million last year, wants to use its LFE Token to power “an online community allowing members to partake in various club and fan experiences from match day tickets, tours, and player meet and greets, to specific merchandise and third-party offers”. There has been not much information regarding the project since the end of the token sale and the project’s website has yet to go live (I was greeted with a “coming soon” message upon visiting the listed web address).

In an interview with The Guardian from last July, the LFE’s head of partnerships Danny Stroud said that the company wanted to create a token-based football community, to “enable clubs to have a direct connection with fans in a frictionless marketplace”. The LFE also reportedly has signed agreements with the Italian club Bari and Madrid-based Alcobendas that aim to lower ticket and merchandise pricing and offer fans the opportunity to buy equity in clubs using cryptocurrency.

We can all be socios

Nothing epitomises the club-fan relationship better than Spanish football giants Real Madrid and Barcelona. Despite being bitter rivals on and off the pitch, the two biggest football clubs in Spain employ similar systems, where their most faithful supporters can directly partake in the clubs’ governance by electing their presidents. The Spanish term for these supporters, socios, has been borrowed by a Malta-based start-up looking to realise a similar concept using blockchain.

Socios.com describes itself as the “world’s first tokenized voting platform where football fans can have a direct voice in some of the many decisions their favourite clubs undertake”. The start-up has built a technology to facilitate so called Fan Token Offerings (FTO), through which fans can acquire official fan tokens of clubs they support. These tokens give their holders the ability to vote on auxiliary club matters, such as which opponent to face in a friendly match or which kit the team should wear. The tokens also grant access to VIP rewards and can be traded on the socios.com marketplace, though only against a native crypto token.

What fascinates me about this project is that it has already secured some major endorsements. Last year, the platform signed deals with Italian football giant Juventus and France’s Paris Saint-Germain (PSG) – two of the largest football clubs in the world. Both clubs plan to issue their own official fan tokens using Socios’ technology later this year and both see this as an opportunity to forge stronger connections with their fans.

Additionally, Socios has been backed some big players in the blockchain industry, such as major cryptocurrency exchanges Binance and OKEx.

And while the fact that major sports clubs are seeking new was to boost fan engagement may not be that surprising, it is refreshing to see that some of the highest governing bodies in sports are also exploring how they can utilise blockchain for the benefit of the fans. Last August, UEFA announced that it had successfully tested a blockchain-based ticket distribution system. The organisation distributed 100% of the tickets for the UEFA Super Cup match between Real Madrid and Atletico de Madrid via the blockchain-based app for Android and iOS devices. UEFA said at the time that the trial was part of its efforts to make its ticket sales process “more simple and safe”.

Focus on the fans

This tongue-in-cheek comment belongs to Ronnie Chieng, senior correspondent on the Comedy Central’s programme “The Daily Show”. The joke, which Chieng made during an Ethereum conference last year, was clearly aimed at the crypto industry’s tendency to overhype and exaggerate the potential of its underlying technology. It rang especially through in the wake of the cryptocurrency boom of late 2017, which saw some people attributing almost mythical properties to blockchain.

Ultimately, I think that focusing on the fans is the right direction for sports-related ICO and blockchain projects. Yes, this won’t make teams and athletes better competitors, but it can go a long way towards providing a better fan experience and new ways for supporters to connect with their favourite clubs, especially in today’s always connected world. And in such a fan-driven sector as sports, this might just be the most important thing.

The post ICOs in the Sports Industry appeared first on The Independent Republic.