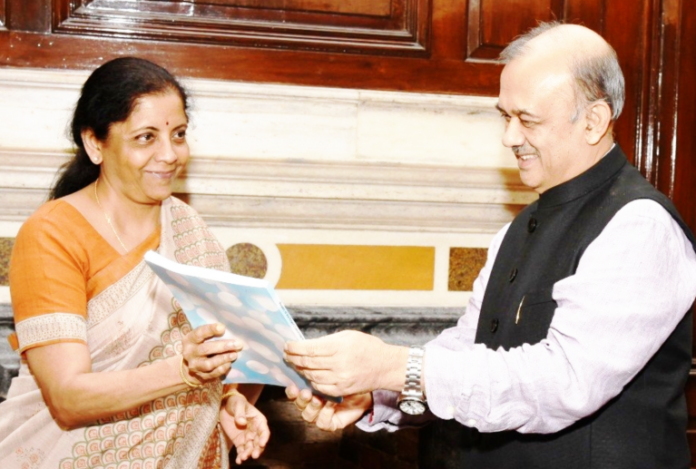 A new Indian government report has put cryptocurrency in a positive light, viewing the mechanisms surrounding it, including initial coin offerings, as “revolutionizing the global fintech landscape.” The report also discusses the regulation of coins and tokens.

The Indian Ministry of Finance announced Monday that the Steering Committee on Fintech-Related Issues has submitted its final report to the finance minister. The committee was constituted by the Department of Economic Affairs (DEA) under the chairmanship of Subhash Chandra Garg who was the DEA Secretary at the time. He has since been reassigned to the Power Ministry. The 150-page report includes a section on digital currencies and tokens.

The committee described in its report that the “Use of digital tokens resolves the issue of multiple currencies, improves liquidity and capital compliance costs, allows for micro-payments and expedites the payment process, which further eliminates liquidity risks,” elaborating:

The report details how ICOs work and emphasizes that token issuance “has emerged as an innovative way of capital raising by fintech businesses,” citing that 790 ICOs had been issued as of Sept. 25, 2018, raising a total of $20 billion. This year, the total amount of funds raised globally in ICOs so far is over $346 million, according to token sale tracking website ICOdata.

The mandate of this committee “was to take stock of developments in the fintech space globally and in India, study the regulatory climate in various geographies, identify application areas and use cases in governance and financial services, [and] suggest institutional regulatory upgrades enabling fintech innovations,” Garg described.

Another committee under the chairmanship of Garg was the interministerial committee (IMC) tasked with studying all aspects of cryptocurrencies and providing recommendations. Constituted on Nov. 2, 2017, the IMC met three times before submitting its report and draft bill entitled “Banning of Cryptocurrency and Regulation of Official Digital Currency Bill 2019” to the finance minister. The report and bill are both dated Feb. 28, but were made public on July 22.

Besides Garg, the IMC report was signed by the secretary of the Ministry of Electronics and Information Technology, the chairman of the Securities and Exchange Board of India, and the deputy governor of the Reserve Bank of India (RBI). All of them are also members of the Steering Committee, along with a number of other government officials, the CEO of the Unique Identification Authority of India, and the CEO of Invest India. In addition, 31 industry participants are listed in the report, including the National Association of Software and Services Companies (Nasscom), the Internet and Mobile Association of India (IAMAI), Paypal, Mastercard, Facebook, and several banks such as RBL Bank, State Bank of India, and Yes Bank.

Since the public release of the IMC report and draft bill, the Indian crypto community has been campaigning to convince the government that the recommendations are flawed. Nasscom and IAMAI have also voiced their concerns regarding the bill to ban cryptocurrencies as they believe that banning is not the solution. IAMAI has also filed a writ petition with the supreme court challenging the banking ban by the RBI.

The Steering Committee report suggests that tokens can be grouped into two categories depending on the objective of their issue. The first category is utility tokens, which “entitle future access to a company’s product or service,” the report reads. This type of token includes digital coupons, such as those a hotel or other service providers would issue.

The second category is security tokens. The report notes that some token issuance has the attribute of a security, referencing the U.S. SEC vs. Howey court case which established the guidelines for determining if an offering constitutes a security. The report briefly explained how the Howey test works, stating that four criteria must be satisfied. Particularly, there must be an investment of money and an expectation of profits. The investment of money must be in a common enterprise and any profit must come from the efforts of a promoter or third party. According to the report:

The regulation of coins or tokens depends on the characteristics and the purpose for which they are being issued. While the above classification is mentioned in the IMC report, it is not part of the bill which seeks to ban all “private cryptocurrencies,” except state-issued ones. Instead of defining tokens as security or utility, the bill simply defines cryptocurrency as “any information or code or number or token not being part of any official digital currency, generated through cryptographic means or otherwise, providing a digital representation of value which is exchanged with or without consideration, with the promise or representation of having inherent value in any business activity…”

In its report, the IMC acknowledged that it “recognizes that technological innovations, including those underlying virtual currencies /crypto tokens, have the potential to improve the efficiency and inclusiveness of the financial system.” Nonetheless, it still recommends “a law banning the cryptocurrencies in India and criminalizing carrying on of any activities connected with cryptocurrencies in India.”

Last month, the central bank published its final fintech regulatory sandbox framework. Among the types of businesses, projects, and services that may not participate are those involving cryptocurrency; crypto-asset services; trading, investing, and settling in crypto assets; ICOs; and any products or services which have been banned by the government of India. Meanwhile, the Indian supreme court is scheduled to hear the case relating to India’s crypto policies in January next year, after postponing it at the request of the government in July. The government told the supreme court that it may introduce the bill on cryptocurrency in the next parliament session.

What do you think of the Steering Committee’s report? Do you think the Indian government will abolish the bill to ban cryptocurrencies and introduce positive regulation instead? Let us know in the comments section below.

Images courtesy of Shutterstock and the Indian Ministry of Finance.