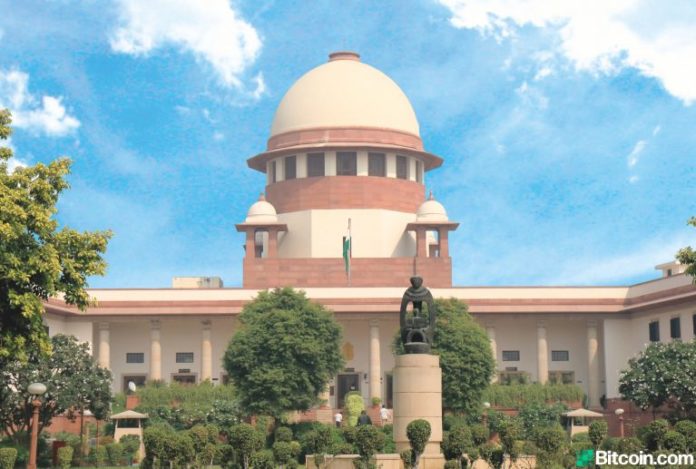 The Supreme Court of India called on for hearing on Monday the writ petitions challenging the banking restriction by the Reserve Bank of India (RBI). After hearing from the RBI’s counsel, the court wrapped up the case for the year. Its decision follows Lok Sabha, the lower house of the Indian parliament, revealing that a crypto bill will not be discussed this year.

The case against the crypto banking restriction by India’s central bank was scheduled for hearing by the country’s supreme court on Tuesday. However, the court called on the case for hearing on Monday at the request of the senior counsel for the RBI, who requested an adjournment of the crypto case as he is currently engaged in another ongoing supreme court case. The court order released later on Monday states:

Upon hearing the counsel the court made the following order. As prayed for, the matters stand adjourned to be listed on 14.01.2020 at the top of the board.

Being at the top of the board means the case is likely to be heard on that day, but it could still be postponed as the court has done so in the past. The RBI issued a circular in April last year banning regulated financial institutions from providing services to crypto businesses. The ban went into effect three months later and banks subsequently closed the accounts of crypto exchanges, forcing some of them out of business. A number of stakeholders in the industry immediately filed writ petitions challenging the ban, which the supreme has been slowly hearing. Meanwhile, a number of cryptocurrency exchanges have launched peer-to-peer (P2P) trading to help their customers buy and sell cryptocurrencies using INR.

Parliament Will Not Discuss Crypto Bill This Year This bill entitled “Banning of Cryptocurrency and Regulation of Official Digital Currency Bill 2019” was drafted by an interministerial committee (IMC) headed by former Secretary of the Department of Economic Affairs Subhash Chandra Garg. The committee submitted its report containing recommendations and the draft bill to the Ministry of Finance back in February. The report and bill were made public in July. The government requested the court postpone all writ petitions concerning the country’s cryptocurrency bill until the bill has been introduced in Lok Sabha. The court obliged and postponed the case to the last week of January.

Meanwhile, the Indian crypto community has been actively campaigning for the government to re-examine the IMC recommendations because they believe that the bill is flawed. Besides social media campaigns, such as the “India Wants Crypto” campaign, there have been several closed-door meetings to help the cause. A member of Rajya Sabha, the upper house of the Indian parliament, has also met with a number of industry stakeholders to discuss the best course of action.

Do you think the supreme court will hear the crypto case in January? When do you think the Indian government will introduce a crypto bill? Let us know in the comments section below.