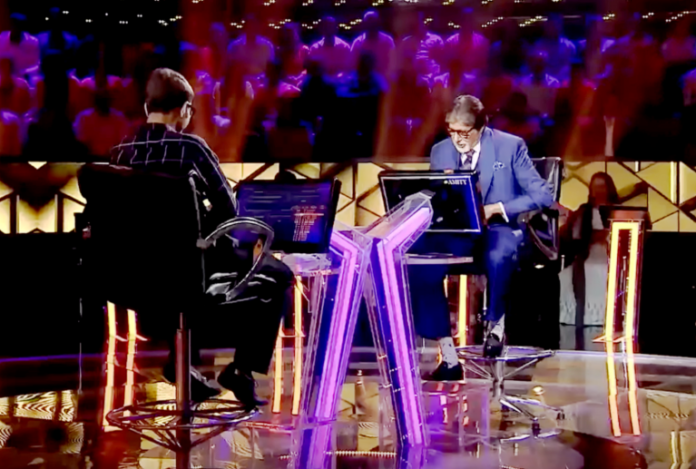 One of the most popular reality TV shows in India called Kaun Banega Crorepati, based on the show ‘Who Wants to Be a Millionaire,’ has just given crypto a boost. A contestant on the show was asked a question about Facebook’s Libra cryptocurrency, and the show’s host, Amitabh Bachchan, proceeded to explain what cryptocurrencies are to millions of viewers.

Indian Version of ‘Who Wants to Be a Millionaire’

Kaun Banega Crorepati (KBC) is one of the most popular reality TV shows in India. Based on the British program “Who Wants to Be a Millionaire,” the game show began airing in the year 2000 and is now in its 11th season. It is hosted by veteran actor Amitabh Bachchan. During Monday’s episode, he asked a contestant about Facebook’s Libra and then talked briefly about cryptocurrencies in general.

Himanshu Dhuria, a 19-year-old contestant from Uttar Pradesh who is training to be a commercial pilot, was in the hot seat. Among the questions presented to him was “What is Libra, proposed by Facebook?” He had to choose between four options: artificial intelligence camera, instant messenger app, short video platform, and cryptocurrency.

Similar to its Western counterparts, the show allows the use of lifelines to help contestants answer difficult questions, such as asking the audience, removing two of the four choices (50:50), and asking experts. Without using one of his lifelines, Dhuria correctly answered that Libra was a cryptocurrency. Host Bachchan then proceeded to briefly explain what cryptocurrencies are, stating:

Cryptocurrency is a form of digital and global money system — currency. Bitcoin, litecoin, [and] ripple are some existing cryptocurrencies.

The Indian crypto community is overjoyed that millions of KBC viewers have now been exposed to cryptocurrency. Nischal Shetty, CEO of local crypto exchange Wazirx, tweeted after the show that “Millions of Indians now know about crypto thanks to this.”

According to local media, the game show is among the most popular in India. Rediff.com reported earlier this month that the show racked up a viewership of 246 million in 2017, which dropped to 223 million the following year. Data by the Indian Broadcast Audience Research Council (BARC) shows that, in September 2017, KBC was the second most watched show in the country.

Danny Boyle’s 2008 film Slumdog Millionaire was loosely based on this show. It won eight out of the 10 Oscars it was nominated for at the 81st Academy Awards, including Best Picture. Further, the host in the movie, a role portrayed by Anil Kapoor, was based loosely on Bachchan. The actor has since appeared on a celebrity version of KBC. Bachchan himself is also an actor and producer. He gained popularity in the early 1970s and has won numerous awards. Facebook unveiled its plans in June for a newly formed subsidiary, Calibra, to provide financial services via the Libra network. “The first product Calibra will introduce is a digital wallet for Libra, a new global currency powered by blockchain technology,” the social media giant detailed. “The wallet will be available in Messenger, Whatsapp and as a standalone app — and we expect to launch in 2020.”

Since Facebook’s announcement, many countries have been scrutinizing Libra due to its massive scale which could propel the digital currency into the mainstream, jeopardizing the role of central banks worldwide. Several U.S. lawmakers have voiced their concerns and tried to stop Facebook from continuing its work on the project. The G7 countries have held several discussions on the matter. There have even been reports that some countries are escalating their efforts to launch central bank digital currencies to get ahead of Libra. China, for example, is reportedly close to launching its own digital currency that will resemble Libra. As for India, former Secretary of the Department of Economic Affairs (DEA) Subhash Chandra Garg said at the time that the “Design of the Facebook currency has not been fully explained.” He elaborated, “But whatever it is, it would be a private cryptocurrency and that’s not something we have been comfortable with.” Garg headed an interministerial committee (IMC) tasked with studying all aspects of cryptocurrencies and providing recommendations. The IMC has submitted its report with a draft bill entitled “Banning of Cryptocurrency and Regulation of Official Digital Currency Bill 2019” to the Ministry of Finance. The government has told the country’s supreme court that this bill may be introduced in the next parliament session.

Since the IMC report and draft bill were made public on July 22, the Indian crypto community has been putting a lot of effort into convincing lawmakers how flawed the recommendations are. Instead of banning cryptocurrencies, the community is calling for positive regulation for the Indian crypto industry. The Indian crypto community’s efforts have gained the support of some major industry groups such as the Internet and Mobile Association of India (IAMAI) and the National Association of Software and Services Companies (Nasscom). Both believe that banning is not the solution. The IAMAI also has a writ petition pending at the supreme court which challenges the banking ban by the Reserve Bank of India (RBI). The central bank issued a circular in April last year, banning banks from providing services to crypto businesses including exchanges. The ban went into effect 90 days later.

Last week, the Steering Committee constituted by the DEA, also under the chairmanship of Garg, submitted its final fintech report to the finance minister. The report put crypto in a positive light. It states that the “Use of digital tokens resolves the issue of multiple currencies, improves liquidity and capital compliance costs, allows for micro-payments and expedites the payment process, which further eliminates liquidity risks.” It further adds that “The mechanisms surrounding cryptocurrencies, particularly the blockchain and initial coin offerings (ICOs), are revolutionizing the global fintech landscape.”

The Indian supreme court is scheduled to resume hearing the case against RBI’s banking ban on Sept. 25. During the latest hearing of this case, the court ordered the central bank to reply to the representation filed by the IAMAI which outlines measures crypto exchanges could implement such as those related to KYC and AML. Meanwhile, the case concerning the country’s crypto policies has been moved to the end of January.

What do you think of this popular Indian TV show mentioning cryptocurrency and Libra? Let us know in the comments section below.

The post India’s Popular ‘Who Wants to Be a Millionaire’ Show Gives Crypto a Boost appeared first on Bitcoin News.

VanEck has been offering “forward-looking” strategies for over half a century. But its VanEck SolidX Bitcoin Trust ETF for institutional...