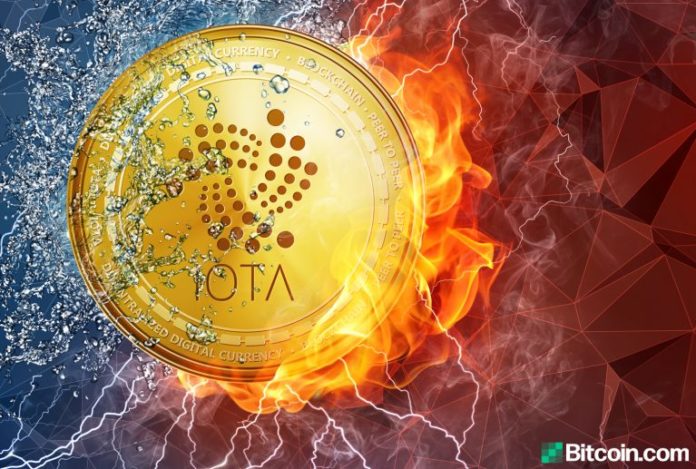 On February 13, the IOTA network came to a screeching halt and the IOTA Foundation reports that $1.6 million worth of the native currency was stolen. The following day, the IOTA network status page still shows the mainnet is “not operational” and the development team has found an “exploit related to the Trinity Wallet.”

The IOTA network is a hot topic within the cryptocurrency community right now, with people discussing the network’s recent outage. At the time of publication, IOTA’s network status page says “Mainnet (1341599), Not operational, TPS: 0.6500.” Alongside this message are multiple status updates from the core development team. At first, the team heard several reports of theft and decided to warn people using Discord and Twitter.

The developers also said: “As a precaution, we ask you to keep your Trinity wallet closed for now.” Following the initial investigation, IOTA programmers decided to turn off the “coordinator to make sure no further theft can occur until we find out the root cause of these thefts.” Since the initial announcements, the topic has been trending among the crypto community across social media. The team also warned the community on Twitter and explained that law enforcement were involved. The official IOTA Twitter account stated:

Currently, IOTA is working with law enforcement and cybersecurity experts to investigate a coordinated attack, resulting in stolen funds. To protect users, we have paused the coordinator and advise users not to open Trinity until further notice.

Despite this message, the Twitter account still has a pinned Twitter post that explains the Trinity wallet is “secure.” After the warning tweet and update message that disclosed the team shut off the IOTA Coordinator, many people on Twitter asked what they meant by the phrase “paused the Coordinator?” Commentator Eric Wall discussed the IOTA fiasco on Twitter where he’s well known for calling out the vulnerabilities tied to the IOTA network. Wall stated:

A question that keeps me up at night: Is it possible to create a rubbish coin based on advanced bullshit, build a community of misguided fans nevertheless, run it centralized for 5 yrs, hard fork-copy the design of a real working project, keep the community and become a success?

This is very bad news, what’s going to happen to all the Bosch control system that IOTA is powering ! Think of all the Volkswagon vehicles that can no longer operate because the entire network is shut down.

This is worse than Y2k. I’m going into my bunker to prep for doomsday. https://t.co/DK4VB3Oipv

IOTA developers noted in another update that the IOTA Foundation has been working around the clock to investigate the matter. “Most evidence is pointing towards seed theft, cause still unknown and under investigation,” the IOTA status page noted. “Victims (around 10 that identified with the IOTA Foundation so far) all seem to have recently used Trinity,” the developers added.

On February 14, the IOTA team gave the public another update which said they had found the exploit and are “now working on resolving the issue.” IOTA engineers insisted that the exploit was definitely related to the Trinity wallet and stressed “the IOTA core protocol is – as already communicated before – not breached.” IOTA team members further disclosed:

We know that you would like to understand more details, but ask you to refrain from questions towards the community moderators due to the parallel ongoing coaction with law enforcement. The teams are currently developing a mitigation strategy. We will share all details about the exploit in due time and (of course) publish a complete incident analysis as well.

The discussion regarding IOTA’s lack of decentralization is at the heart of the conversations on social media. The leadership at IOTA seems to be extremely fragile according to a recent blog post and the chain stopped working for 15 hours during the last week of December 2019 as well. Despite all the craziness surrounding the IOTA project, the market has remained the 21st largest blockchain by market capitalization. IOTA has gained 1% this week despite the paused Coordinator.

What do you think about the issues with IOTA during the last 24 hours? Let us know in the comments section below.

The post IOTA Network Still Down: How the Next Bitcoin Killer Screeched to a Halt appeared first on Bitcoin News.