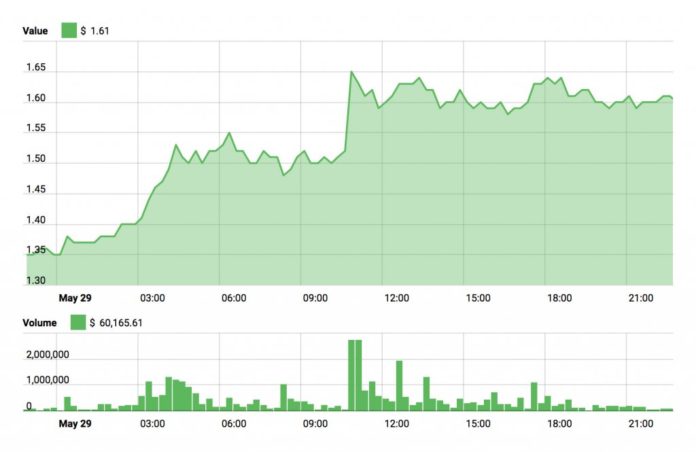 After weeks of bearish price activity, the market is beginning to shows signs of possible recovery. IOTA, in particular, experienced an 18% price increase – the most significant amongst top 10 tokens by the current market cap.
IOTA is up 18.3% over the past 24 hours.

Bitfinex is responsible for nearly a third of IOTA’s total volume, followed by Binance and OKEx.

Bitcoin traded green today, rising above $7,400 after testing its support at $7,000 – it appears that IOTA’s recent gains are accompanying an overall market increase.

There is a lot of excitement in the IOTA community following the beta release of the token’s new Trinity mobile wallet app.

The IOTA Foundation stated via their blog:

“Over the last few months the Trinity development team has been working diligently, in close collaboration with community members. Long days and nights, building, testing, getting feedback and iterating. “

A desktop version is currently in the works, but the mobile wallet is available for both iOS and Android.

Initially a community project, the IOTA development team took over the wallet to ensure safety and ease of use. The wallet is designed for those who may be new to the crypto space, or who are not tech savvy.

However, Trinity is not the only news stirring up the market – last week the United Nations announced a blockchain-based transparency initiative with IOTA.

The Trinity wallet announcement coupled with the new UN deal may be responsible for the excitement that led to IOTA’s bullish movement today.

A better picture of IOTA’s value, in addition to the market’s sentiment, will be demonstrated over the next few days.

IOTA Price Increases 18% Over Past Day Following Trinity Wallet Beta Release was originally published on https://cryptoslate.com/. The IOTA-News Community curates, examines, and summarizes news from external services while producing its own original material. Copyrights from external sources will be credited as they pertain to their corresponding owners. The purpose is to make use of 3rd party content or pictures as either allusion or promotional endorsement of mentioned sites. If you have a claim of copyright infringement with respect to material, please mail to support[at]iota-news.com. IOTA-News.com is a community run website and is NOT affiliated with the IOTA Foundation in any way.