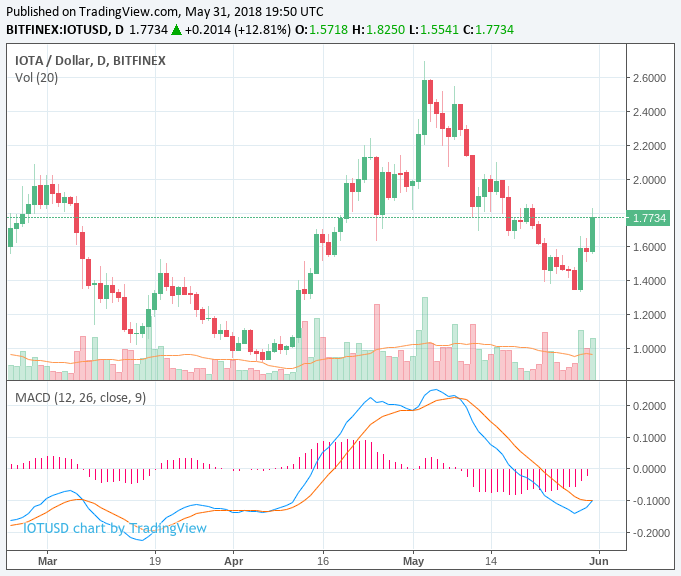 The IOTA price (MIOTA) surged past other coins’ average daily gains for the day, climbing 17% over its Wednesday level. The project released the beta version of the Trinity Wallet on May 29 and has kept the price momentum since then, as CCN reported.

Currently, the IOTA price sits at $1.77. Since May 28 and the announcement of the new wallet, IOTA has increased over 31%. This is calculated from the close of day trading price of $1.35 on May 28. IOTA now has a market cap of $4.9 billion, making it the ninth-largest cryptocurrency.

The price jump comes amid a general bull market for the majority of coins and tokens. However, IOTA’s 24-hour increase stands out well above the others in the top 100, which are averaging 3-6% increases.

The IOTA project has gained numerous partnerships at a frantic pace, in addition to the continued development output. The project’s main feature, the “Tangle,” is targeted at businesses who are looking to make their processes and transactions more efficient and transparent. The projects’s focus on powering the Internet of Things infrastructure is key in gaining partners.

Earlier today, IOTA announced a partnered with Norway’s largest bank. Also, as CCN reported on May 24, IOTA partnered with a key logistics arm for the United Nations.

The Trinity wallet may be helping this cause overall. The development team said that it took extra precautions to make sure that the Trinity wallet was easy to use and free from as much “user error” as possible. This included two external reviews and security audits. This is important at a time when new cryptocurrency investors are continuing to flood into the space, and there is frequent frustration with the complexity of exchanges and key management.

That said, it remains to be seen whether the current excitement over these partnerships and the release of the new wallet will translate into sustained price support.

IOTA Price Surges 17% for the Day to Headline Widespread Market Rally was originally published on https://www.ccn.com/. The IOTA-News Community curates, examines, and summarizes news from external services while producing its own original material. Copyrights from external sources will be credited as they pertain to their corresponding owners. The purpose is to make use of 3rd party content or pictures as either allusion or promotional endorsement of mentioned sites. If you have a claim of copyright infringement with respect to material, please mail to support[at]iota-news.com. IOTA-News.com is a community run website and is NOT affiliated with the IOTA Foundation in any way.