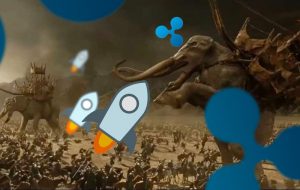 The crypto industry is filled with drama, and the relationship between Ripple and Stellar is no exception. Stellar founder Jed McCaleb also co-founded Ripple. But due to disagreements with other Ripple leaders, he broke off with a new variation of Ripple’s codebase, founding Stellar in 2014.

Since then, an assumed rivalry has been a running story in the crypto space. And this XRP/XLM rivalry rumour doesn’t come out of the blue; various leaders on both sides are quick to smear the competitor project. Let’s take a couple of examples from recent days:

McCaleb hasn’t been as vocal as those in the Ripple camp, but McCaleb has been selling a whole lot of XRP. McCaleb owns these coins because he received them as a founder of Ripple, and he made an agreement to sell to XRP buyers only gradually, at the time of his leap from Ripple corporate. There are those who say McCaleb is now in breach of that agreement, though no one seems able to agree.

The people who run Ripple and Stellar may be rivals, but we’re not sure they’re true competitors. In reality, the two projects occupy very different spaces in the crypto industry. Ripple creates applications for banks in the US, Europe, and Dubai. Stellar creates applications for regular people, particularly the unbanked. They use some of the same technology to accomplish these goals, but their goals have very little real world overlap.

Stellar is also more typically “blockchain” in its organisation, plans, and user base. Developers create DApps on Stellar to be used in public blockchain/tech markets. Stellar is slightly more decentralised than Ripple. Stellar is introducing a decentralised exchange. Ripple has very few of these features, and doesn’t seem close to implementing them.

In the end, the bad blood that exists between Ripple and Stellar is nothing more than that. And while the leaders of each project might occasionally roast their rivals, this rivalry has little bearing on the use case and success of either project. As time goes on, the two projects will grow even further apart. McCaleb will eventually sell all of his XRP, Ripple will become fully integrated in the world of private banking, and the world will start to forget that the two blockchain ecosystems were ever considered to be even somewhat similar.

The post Is the Stellar/Ripple Rivalry Overblown? appeared first on The Independent Republic.