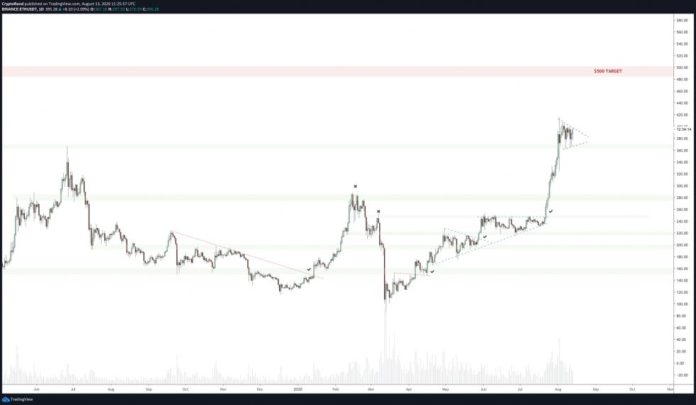 Ethereum and the aggregated cryptocurrency market are struggling to maintain the momentum that drove them higher over the past few weeks.

This momentum began stalling when Bitcoin reached $12,000 and when ETH reached $400 – with the resistance at these levels being incredibly strong.

It now appears that Ethereum is reaching a do-or-die level as it trades below $400 – this is especially clear while looking towards its BTC trading pair.

One analyst is now noting that he expects it to break upwards due to the DeFi trend and other factors, but he also notes that a potential decline could be quite large.

Ethereum’s bulls and bears have been engaged in an intense battle over the past week for control of $400.

Overnight – despite Bitcoin remaining steady around $11,500 – ETH’s price surged up towards highs of $401 before it lost its momentum and succumbed to intense selling pressure.

This led it to slide as low as $379, at which point buyers stepped up and sent it back towards $390. It, like Bitcoin, has been consolidating ever since.

He recently put forth a chart showing an upside target of roughly $500, pointing to a potential bull flag that Ethereum has been forming as a reason why upside is imminent.

Another analyst recently explained that Ethereum has reached a “decisive point” that will likely determine its mid-term outlook.

While looking towards the cryptocurrency’s BTC trading pair, he explained that he is expecting a rally up towards 0.0375 BTC. He also notes that a downside movement here could be significant.

“ETH – BTC: At a decisive point here; I think the odds of this breaking upwards are greater due to Uniswap/all that jazz. If I’m wrong I’d expect this to retrace back to the mid range (0.5), maybe sweep the most recent H.L.” he said. 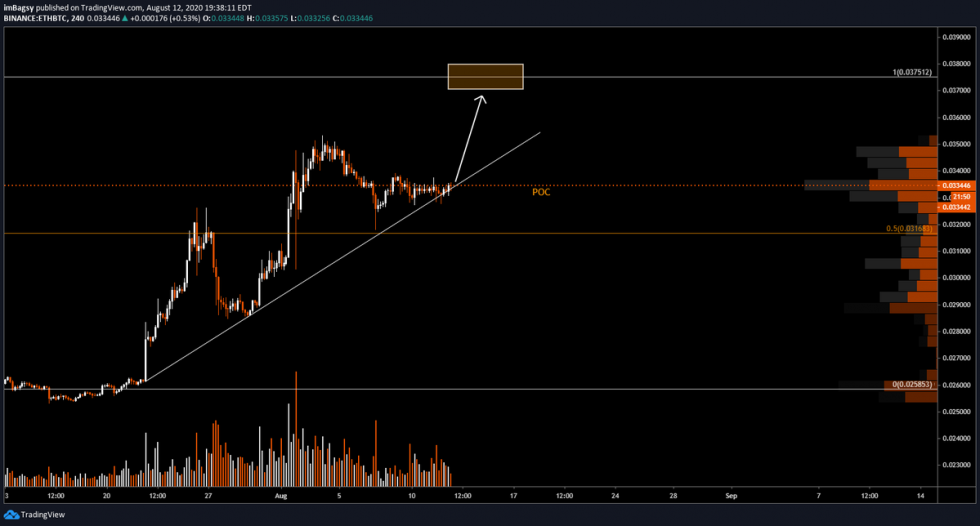 Ethereum remains connected to Bitcoin, so for it to see a sustained break above its near-term resistance, it is imperative that BTC also pushes higher.

Bitcoin has been oscillating between the lower and mid-$11,000 region throughout the past few days This rocky price action comes...