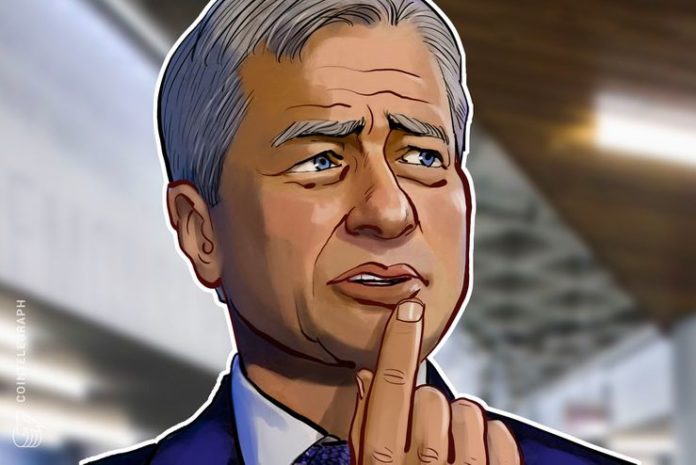 JPMorgan Chase’s Jamie Dimon was bullish on blockchain tech, but shied away from commenting on cryptocurrency, saying fiat payment apps are “the biggest potential disruption to our business” in an interview published in the July-August issue of the Harvard Business Review.

When asked about his company’s chief competitive threat, Dimon, chairman and CEO of JPMorgan Chase — the largest of America’s Big Four banks — singled out what he called “new forms of payment.” Specifically naming PayPal, Venmo and Alipay, Dimon said that “these companies are doing a good job of embedding basic banking services in their chats, their social, their shopping experience.”

While he didn’t mention crypto as a potential disruptor, when he was asked about his view on cryptocurrency in a following question, Dimon simply replied, “I probably shouldn’t say any more about cryptocurrency.” Dimon did argue that crypto is “not the same as gold or fiat currencies,” which are “supported by law, police, courts […] [are] not replicable, and there are strictures on them.” Dimon also made a point of calling blockchain technology “real,” –– which implying that crypto is not –– saying that JPMorgan is “testing it [blockchain] and will use it for a whole lot of things.”

While JPMorgan’s official position on cryptocurrency and Dimon’s opinion do not always coincide, both have seen a shift over the past year. On Sept. 13, 2017, Dimon reportedly called Bitcoin a “fraud” at an investor’s meeting, along with threatening to fire any employee trading Bitcoin on the company’s accounts.

Somewhat contrary to what Dimon told Harvard Business Review in his recent interview, in an SEC filing on Feb. 27, the bank marked cryptocurrency under the report’s “Competition” subsection, saying it could “put downward pressure on prices and fees for JPMorgan Chase’s products and services or may cause JPMorgan Chase to lose market share.”

In February of this year, a JPMorgan internal report also called cryptocurrencies the “face of the innovative maelstrom around the blockchain technology.”

When speaking with Cointelegraph in Davos in January, Dimon took a stance more similar to what he told Harvard Business review, saying he “can’t answer,” but also claiming he was “not a skeptic.”

In the last few months, however, JPMorgan — and evidently Dimon — have more explicitly come out as bullish on blockchain, with the bank even filing a blockchain-related patent on May 3.

On May 17, JPMorgan announced that they had created and filled a new position of head of crypto assets strategy.