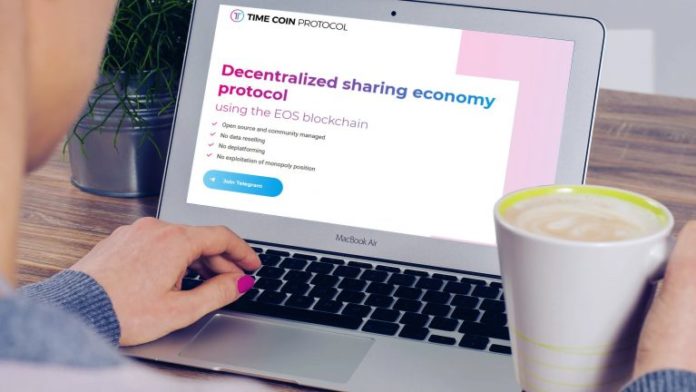 TimeCoinProtocol is a new project developed by TimeTicket leveraging blockchain technology to create a decentralized sharing economy platform. The solution is powered by the TimeCoin token (TMCN), an EOS-based native token used both for payments in decentralized apps built upon the protocol and for the allocation of rewards for platform supporters. TimeTicket’s parent company is Japanese tech group Globalway Inc, which has over 50 million users and is listed on the Tokyo Stock Exchange.

TimeCoinProtocol will allow for users of sharing economy apps to migrate from service to service while keeping all their private data and hard earned reputations. This also makes it attractive for dApp developers to adopt, as it allows them to offer their services to a much larger pool of users attracted by the whole ecosystem of dApps than they can each get by themselves alone.The protocol is already being adopted for real services by the development team. The first two dApps of the many expected to use TMCN are TimeTicket and eSportStars.

TimeTicket is a Japanese sharing economy marketplace with more than 250,000 registered users. The current marketplace functions as an intermediary between people who want to provide services by selling their own time and people who want to purchase these services from them. TimeTicket will use the TimeCoinProtocol to offer a new decentralized marketplace with direct peer-to-peer interactions and no intermediaries. The company raised more than $3 million USD from investors and its revenue has increased more than 20 fold over the last 3 years.

eSportStars is a new service that will let esports players, streamers and fans easily find people to play with, buy and sell competition tickets and win TMCN tokens. Available in Japanese, English and Chinese, eSportStars will tap into the rapidly growing global esports market with the help of professional esports teams. Official groups already signed up to the service include: Japan’s first female professional esports team JapanKillerAngel which specializes in such games as PUBG and Valorant, GameWith which specializes in Fortnite and Super Smash Bros, and Japan’s most renowned Tekken players, TeamYAMASA.

The developers of TimeCoinProtocol are planning on launching an Initial Exchange Offering (IEO) event for the TMCN token on BitForex. The schedule for the IEO will be announced soon by the exchange. Initial TMCN token supply is set at 100 millions.

The TimeCoinProtocol team also plans to announce an activity where supporters such as community members can receive tokens based on their contributions to the project. The activity will be announced on the project’s Telegram channel so make sure to follow it for updates.

This is a sponsored post. Learn more on how to reach our audience here. Read dislaimer below.

Institutional capital flow into Bitcoin has decreased since its last attempt to break above $10,000. The “lack of interest” has...