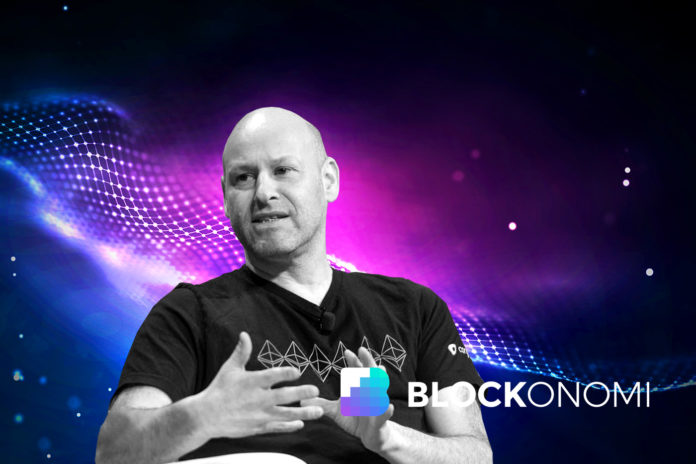 While giving his keynote address at the SXSW Conference in Austin last week, Joseph Lubin, co-founder of Ethereum (ETH) stated that the full ramification of the blockchain system would lead to an expansion of the global economy. Adding a time frame to this, Lubin predicted that he expects this to happen within the next decade or two.

“Currently, the economy is about $80 trillion (in GDP-related value). When blockchain fully ramifies in 10, 20 years, the economy will probably be ten times larger, and blockchain will be a significant- a major- part of that.”

Lubin, who also founded incubator project platform ConsenSys, also took the time out to speak on some of the advantages that will be brought into the crypto space as a result of Ethereum 2.0, a much-anticipated upgrade to the Ethereum network.

In particular, he clarified that with this “rebrand,” the Ethereum development team will capitalize on the inefficiencies of Bitcoin (BTC), developing a much stronger crypto asset.

“In Bitcoin and currently in Ethereum, you need to have specialized hardware, burn lots of electricity, waste lots of computation, to basically keep everybody in sync. With Ethereum 2.0, we’ll have a blockchain system much more powerful and scalable that uses orders of magnitude less energy.”

On January 31, the Ethereum development team announced that it launched its first pre-release for “phase zero” of their pivot into Ethereum 2.0. In a published post on Github account, the team noted that “this marks the first release in a series of weekly releases through February 2019. Phase 0 in v0.1 is relatively featured complete and approaching stable.”

Also known as Serenity, Ethereum 2.0 is expected to be the culmination of the system’s upgrade, marking the network’s complete transition from Proof of Work (PoW) to a Proof of Stake (PoS) consensus system. It’s heralded as a solution to current problems faced by the network, including issues on security, scalability, and other blockchain-related parameters.
Serenity will be the very last in a series of stages that were set out by the platform in its rollout.

The platform is already in the third stage (known as Metropolis), which includes two separate system-wide hard forks; Constantinople and Byzantium.

Beyond Ethereum, Lubin has been vocal on the benefits of blockchain technology as a whole. In a recent interview, he explained how content creators like journalists and music artists could use the nascent technology to monitor how their content is distributed and consumed.

In Lubin’s view, the elimination of go-betweens will be the most significant benefit that would accrue to the artists. He went further to explain that, while some intermediaries like promoters might still be present in the supply chain, they won’t “get to a commanding position where they’re extracting enormous rents just because of their intermediary role.”

“I think artists in the music industry on average capture about 11 or 12 percent of the value in the industry, and those big record companies are sucking up 70 or so percent. We can replace those record companies with smart contracts on the Ethereum platform,” he noted in the interview.

For Lubin, the ability to deliver content directly to readers will herald the return to ethics and accountability for reporters.

One startup leading the charge here is Civil, a blockchain platform that seeks to create a transparent and democratic model for journalists to get paid crypto tokens for their work. U.S. news outlet Popula also achieved a world first, when it archived a news article on the ethereum blockchain. Per reports from the site’s editor Maria Bustillos, the article was archived in full on the blockchain, and its hash was stored on the IPFS protocol.

The post Joseph Lubin: Blockchain Will Have Significant Impact on the Economy in 10-20 Years appeared first on Blockonomi.

In the Daily: UAE Needs to Keep up With Crypto, Australia to Support Local Blockchain Industry

In this edition of The Daily we feature two countries that want to promote their positions in the cryptocurrency and...