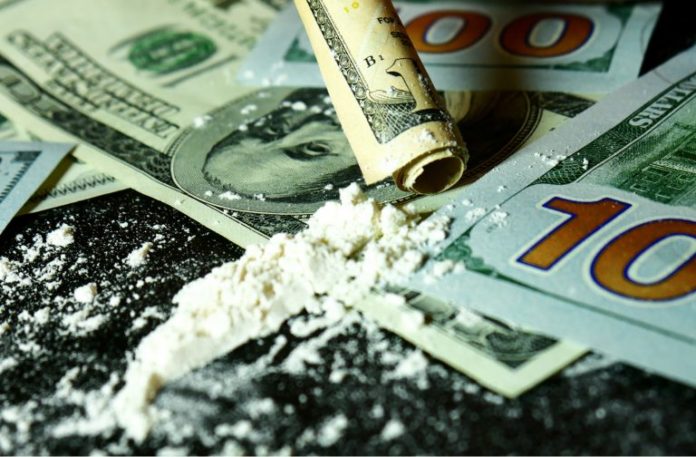 A ship seized by the U.S. Customs and Border Protection Agency in June carrying over 15,000 kilos of cocaine has now been tied to JP Morgan Chase’s asset management unit. Officially the company does not exercise any operational control of the vessel, but some serious questions are raised when such large scale transport is used for black market exchange. Especially given the extensive history of globally established banks paying reparations for money laundering. In view of this, Richard Nixon’s “War on Drugs,” and the popular focus on bitcoin and crypto as means to purchase illegal drugs, is interesting. Compared to fiat money, bitcoin’s impact on the failed drug war barely warrants a mention.

Are Most Crypto Transactions Illegal?

A January 2018 joint study conducted by researchers from the University of Sydney, University of Technology Sydney, and the Stockholm School of Economics in Riga found that approximately half of all BTC transactions were connected to illegal activity. Within the very same year, however, a source from the U.S. Drug Enforcement Administration (DEA) claimed that the percentage of bitcoin transactions related to illegal drugs had shrunk drastically in five years, from 90% to 10%, as a result of greater speculative interest in the currency.

Regardless, according to the study, the result of this crypto market action adds up to about $72B per year, with around 24 million market actors making these transactions. It is also important to keep in mind that “illegal” here denotes all criminal transactions, not just those associated with illicit drugs. Estimates regarding the total market action (fiat, crypto) for illegal drugs are pinned at around $400B per year. Fiat is the clear winner here as far as volume, it would seem.

Drugs Are Winning the War On Drugs

Considering that 90% of U.S. paper money is contaminated with cocaine, questions of crypto being used illicitly are put into a new perspective. Of course, black market drug transactions have been going on since long before the advent of crypto. Laws and regulations have historically engendered black market demand. And where there is black market demand, there are exorbitantly high prices to follow, which dealers and traffickers seek to exploit to the fullest. From small time peddlers to government agents themselves, regardless of legislation, the market will and does provide.

In the U.S. alone about $50B is spent every year simply on capturing illegal drugs and eradicating their use, with a reported 10% success rate. This large expenditure does not even measure the size of the fiat market for illegal substances itself. It is only the cost of trying to stop that same market from proliferating, and it’s already close to equalling the total amount in USD of illegal yearly bitcoin transactions. Then there is the a tragic humanitarian crisis accompanying this ‘war’ to consider. There is an average of one drug-related arrest every 25 seconds in America, with over one million individuals arrested every year for use or possession. Over $3B annually is spent keeping these individuals, many of whom are non-violent, in cages.

National drug overdose rates are increasing rapidly, year after year, hitting a remarkable 70,237 deaths in 2017 according to the Centers for Disease Control and Prevention (CDC). Despite all of this, illicit drug use as a whole has not declined (the increase has been mostly due to marijuana use) and both fiat and crypto purchases of illegal substances continue to increase as well, as far as direct measurements go. Some of the biggest drug traffickers in recent history have been connected to seemingly unlikely parties, thought commonly to be the arbiters of justice and order in society. To big government and big business interests, in not-so-tenuous fashion, in other words. For example, cartel kingpin Pablo Escobar’s son has recently gone public with his claim:

[My] father worked for the CIA selling cocaine to finance the fight against Communism in Central America.”

The late Gary Webb, a groundbreaking and controversial journalist who released an incendiary three-part series in the San Jose Mercury News called “Dark Alliance” in August 1996, alleged that the L.A. crack cocaine epidemic of the 90s was an intentional ploy by the U.S. Federal Government to fund guerilla groups in Latin America for political and strategic military purposes. Webb was dogpiled by mainstream media outlets and even the Mercury News itself, which had stood by him initially, turned on him in the end. Many wrote Webb off as a fringe conspiracy theorist. In retrospect however, his claims don’t seem so crazy. Webb’s contemporary Jesse Katz would reflect in 2013:

As an L.A. Times reporter, we saw this series in the San Jose Mercury News and kind of wonder[ed] how legit it was and kind of put it under a microscope. And we did it in a way that most of us who were involved in it, I think, would look back on that and say it was overkill. We had this huge team of people at the L.A. Times and kind of piled on to one lone muckraker up in Northern California.

The “muckraker” Webb is also backed up by a government report which found: “It is clear that individuals who provided support for the Contras were involved in drug trafficking … In each case, one or another agency of the U.S. government had information regarding the involvement either while it was occurring, or immediately thereafter.” The U.S. Federal Reserve as well, had no power to stop this violent trafficking, or was complicit.

Finally, none of the above is to even mention the legal opioid crisis currently plaguing the United States, with a reported 130+ people overdosing daily on largely FDA-approved medications (arguably little more than legalized and controlled heroin). This, coupled with the annual economic burden of the crisis estimated by the CDC to be around $78.5B, and one begins to wonder who the real drug dealers are. Whether or not JP Morgan Chase leadership is tied to the massive loads of coke on that ship is anyone’s guess. The following three points are clear, however:

First, crypto purchases of illegal substances happen, but they also happen in fiat, and at much greater volume via the latter.

Second, there is a strong argument to be made for some of the largest peddlers of illegal substances being the very entities that ostensibly legislate against them in the first place, reaping profits and political influence via black market exchange. The Lost Cause of Endless War

Cocaine has medicinal uses not related to abuse, violence, or overdose. It is merely a substance derived from plants. The same is true of cannabis and many other “illegal drugs.” The American drug war has been a failure both by the numbers and by standards of basic human dignity, compassion and natural rights.

So many major social problems come to the criminal justice system to be fixed … the only thing we really know how to do is send people to prison.

Sadly Satterberg is stating what is already painfully clear to so many: the drug war has been a failure. It’s by design violent and solves nothing. Ironically, is those talking the loudest about saving us from plants and inanimate substances that seem to be exploiting these markets the most.

What are your thoughts on the cargo seizure and the ongoing drug war? Let us know in the comments section below.

Malta-based cryptocurrency exchange giant Binance has formally launched margin trading for most of its users following months of speculation.  Long-Awaited...