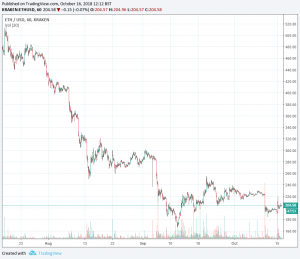 The price of Ethereum (ETC) may be set to suffer another downswing following news that the much -anticipated Constantinople hard fork won’t take place this year. Despite being the second most valuable crypto in the world, ETH price charts have suffered since the turn of the year. Aside from some issues with security and social media scams, the main reason Ethereum has suffered is the ongoing debate over scalability and efficiency.

Indeed, those looking to buy ETH online have been forced to press the pause button while developers find a way to expand the network without compromising its fundamental structure. For many, Constantinople has become the light at the end of the tunnel. Finalized on August 31, the hard fork will improve the blockchain in five key areas. Thanks to new features such as bitwise shifting (EIP 145), changes to off-chain transactions to help scaling (EIP 1014) and more equitable pricing methods (EIP 1283), the system should become smoother and more efficient.

As is often the case with hard forks, disagreements have slowed progress. However, while such delays were expected, the technical hitch wasn’t. Noted by Ethereum blockchain infrastructure firm Infura, an issue with Constantinople caused a test net to become unusable. After making the hard fork live on the Ropsten test net on October 13, a consensus issue occurred and brought the trial to a premature end. With the something in the update upsetting the proverbial applecart, Ethereum will have to go back to the drawing board. What’s more, as developers had previously agreed, any issues on Ropsten would delay the launch of Constantinople until 2019.

In the days following the October 14 announcement, the ETH price in dollars fell from a high of $222 to $205. Although the Ethereum price chart has since made a minor recovery, the 24-hour trading data between October 15 and 16 showed a 0.73% drop in value. In context, the latest dip isn’t the most dramatic one we’ve seen this year. Back in September, the price of Ethereum dropped as low as $173 before rallying at the end of the month. However, what’s clear is that this is challenging times for Ethereum.

Internally, nagging faults have led to problems with network disruption and higher fees. Externally, EOS recently lowered its fees in an effort to entice developers away from Ethereum, while Cardano is now focused on making smarter smart contracts than its rival.

With pressure from all sides, change is needed. Constantinople will certainly improve the blockchain, but could it be too little too late? Heading towards the end of 2018, it’s unlikely we’ll see Ethereum price markers move too far from the $200-mark. However, if the hard form doesn’t come quickly at the start of next year, there’s a chance ETH could lose its footing in the global crypto rankings.