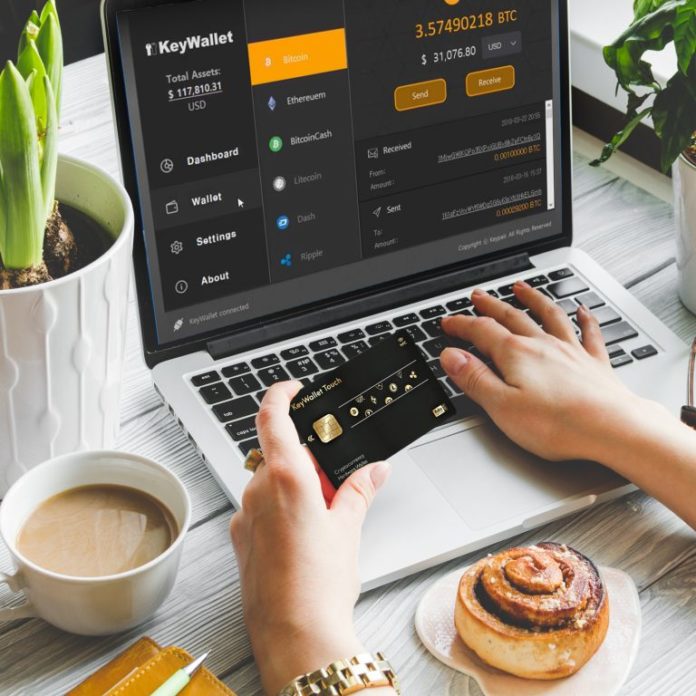 There’s been a slew of new cryptocurrency hardware wallets coming into the ecosystem and the South Korean company Keypair has launched a new model. This past March news.Bitcoin.com reported the firm’s previous design, the Keywallet Classic, and a few new hardware wallet manufacturers stemming from South Korea as demand for the devices has grown exponentially in that region. The Keywallet Classic debuted this January at the CES Electronics Show and the product has also been selling on Ebay. The company’s latest device the Keywallet Touch is a hardware wallet shaped like a credit card, similar to the Coolwallet device we reported on a few weeks ago.

Just like a credit card, the Keywallet Touch is 85.60 × 53.98 mm with rounded corners and built-in NFC technology that interacts with a mobile phone (Android). The phone application recognizes the card allowing users to send and receive bitcoin cash (BCH), ethereum (ETH), litecoin (LTC), bitcoin core (BTC), ripple (XRP), ethereum classic (ETC), and ERC20 tokens. The Keywallet Touch is $69.99 USD which is cheaper than a lot of other hardware wallets, but if you want to use a PC then you’ll require a USB connected reader ($69.99) that is not yet available to the public.

Credit Card Shape and No Batteries

CEO Kevin CK Lee of the hardware-based security solution company explains the new hardware wallet card comes with “first-class” security. “The card is built with Secure Element and its OS and Crypto libraries made by the firm. It also has CC and Eal5+ and CMVP ready product,” Lee noted during the launch.

The company believes cryptocurrency enthusiasts will appreciate the credit card shaped feature so it can be carried easily, and the fact that the device has no batteries adds to the wallet’s overall durability. The Keywallet Touch software can be found at the Google Play store and the user interface acts like a portfolio if you hold multiple cryptocurrencies.

Keypair says that a traditional wallet OS or mobile phone platform keeps the private keys in “insecure areas (HDD, Flash Memory, etc.)”. Furthermore, Keypair explains that an iOS version of its wallet client is on the way, and mobile phones with built-in fingerprint sensors can be used with the Keywallet Touch. One thing to note is this hardware wallet is very new, just like the Coolwallet hardware wallet which has the same credit card shaped design, which means both of these wallets don’t have many reviews online. Some people will want to wait until this product is mass produced and reviewed by reputable third parties.

What do you think about the Keywallet Touch? Let us know your thoughts on this new hardware wallet in the comment section below.

Disclaimer: Bitcoin.com does not endorse this product. Bitcoin.com and the author are not responsible, directly or indirectly, for any damage or loss caused or alleged to be caused by or in connection with the use of or reliance on any information with this hardware wallet platform. Readers should do their own due diligence before taking any actions related to the content.

Images via Shutterstock, and the Keywallet web portal.