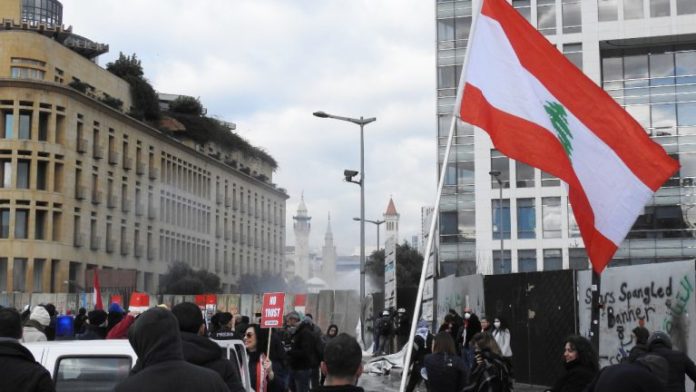 Lebanon is facing an unprecedented economic crisis and the local currency has already lost about 60% of its value. The central bank’s policies have come under fire while citizens are protesting how the government handles the economic meltdown which led to people’s living situation deteriorating “terrifyingly.”

Protests erupted in Lebanon on Friday over the government’s handling of the unprecedented economic crisis that has tanked the local Lebanese currency, devastated people’s savings, and sent prices and inflation skyrocketing. This is the country’s worst economic crisis in decades.

The Lebanese government imposed a nationwide lockdown in March after the coronavirus outbreak. At present, 737 covid-19 cases and 25 deaths have been confirmed in the country of 6.8 million people. The lockdown has led to economic collapse with soaring unemployment and business closures. Prices of basic goods have massively inflated, in some cases by over 60%. A market trader in the city of Saida told Arab News that “the living situation had deteriorated terrifyingly,” adding that “Prices of goods have doubled, people are reluctant to buy, and their purchases are limited to essentials.” One of the protesters, Nada Nasif, told The Media Line:

Our financial crisis began before the corona crisis, which then caused prices to jump. People lost their jobs and the unemployment rate has reached the highest level ever.

The Lebanese pound, pegged to the U.S. dollar for 30 years, has lost about 60% of its value against the dollar so far. The two currencies have been used interchangeably in Lebanon and many people have kept their savings in dollars, which previously could be freely withdrawn from banks. However, withdrawing dollars is now prohibited due to capital controls that have been in place for the past six months. As the pound plunged in value, banks began restricting dollar withdrawals. Then, the central bank said that withdrawals could only be in the local currency at “a market exchange rate” to be determined by banks, Al Jazeera reported. The Lebanese call this policy “plain robbery.”

Lebanese Prime Minister Hassan Diab has distanced the government from the central bank’s policies that he claims led to the collapse of the local currency. The bank went against the government’s policy by allowing all depositors to withdraw money from foreign currency-denominated accounts in the rapidly depreciating local currency, he told the news outlet. “We were not consulted on this matter.”

Responding to the government’s criticism, the central bank governor fired back, defending himself in an hour-long video conference last week. He insisted that during his 30-year tenure, his policies have prevented the country from going bankrupt. Instead, Salameh placed the blame for the dire state of Lebanon’s financial, economic and monetary situation on the country’s entrenched political elite.

Salameh claims that the law forced him to continue to fund the state’s advances and treasury bonds. He said, “The central bank has funded the state, but it has not spent the money,” noting:

We must know who has spent the money, and there are constitutional and administrative institutions that have the task of revealing how it was spent.

Protesters in Lebanon have been defying the nationwide lockdown and curfew to resume anti-government protests. They have criticized Salameh for continuing to lead the central bank and for cooperating with the governments that dug Lebanon into staggering debt with little results.

The Lebanese Cabinet has adopted a rescue plan that includes a request for assistance from the International Monetary Fund (IMF). Prime Minister Diab signed the official request on Friday.

However, not everyone is thrilled with the prospect of getting IMF assistance. Omar al-Mughrabi, a 19-year-old protester in the southern city of Sidon, explained that “the country needs radical change — not reform of failing or ineffective policies.” He was further quoted as saying:

Going to the IMF is not the solution … We don’t need any more debt than we already have.

Lebanon is one of the most indebted countries in the world; the nation defaulted on its sovereign debt for the first time in March. The economic meltdown led to anti-government protests that erupted in October but subsided in mid-March during a nationwide lockdown amid the coronavirus pandemic.

Among those opposing the rescue plan is the Association of Banks in Lebanon. Calling the plan dangerous, the association believes that “The process of local restructuring as mentioned in the plan would lead to further undermining confidence in Lebanon locally and internationally, as it bears trends that flow into legalizing of the state of lawlessness.”

What do you think about the situation in Lebanon? Let us know in the comments section below.