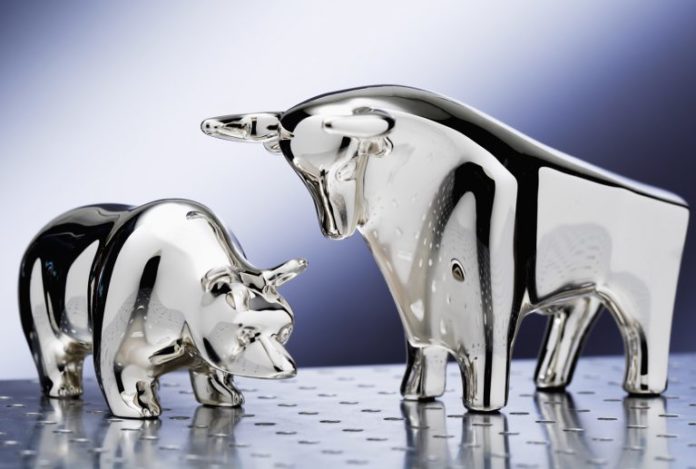 Since July 13, digital currency prices have dropped in value significantly, but most coins have since experienced some recovery. While many crypto supporters are optimistic on where the markets are headed, traders and analysts have noticed a bullish-to-bearish trend. BTC and a slew of other currencies spiked more than 10% at 11 a.m. EST on Thursday, however, indicating the bull market is still in play.

The Bulls Are Back in Town

On Wednesday, cryptocurrency bulls were seemingly exhausted and bears had temporarily taken the reins, clawing back prices over the last week. Currently, the overall market capitalization of the entire cryptoconomy is $281 billion with around $83 billion worth of 24-hour global trade volume. The leading digital asset by market valuation, bitcoin core (BTC), is down over 8% over the last seven days. One BTC is trading for $10,622 after touching a low of $9,165 on Wednesday. BTC is followed by the second largest market cap held by ethereum (ETH) which has dipped by 17% this past week. ETH is swapping for $225 per coin at press time as the cryptocurrency recovered 5.2% of its losses over the course of the earlier morning trading sessions. Following ethereum, ripple (XRP) is trading for $0.32 per XRP, down by 2.3%. Litecoin (LTC) is swapping for $101 per coin and down 1% over the last seven days. Bitcoin cash (BCH) is below litecoin’s market cap in fifth position as each coin is trading for $318, down 7% for the week.

Analyst Insists Libra Scrutiny Pushed the Price of BTC Down

This week has been interesting as U.S. congressional leaders discussed cryptocurrencies at great length to attempt to understand and regulate Facebook’s upcoming Libra coin. Public blockchains like BTC were described by politicians and cryptocurrency advocates over the last two days. Financial columnist and market analyst Naeem Aslam thinks the Facebook Libra investigations and politicians probing BTC pushed crypto prices lower. Most of the questioning and debate in Congress this week revolved around the creation of Libra, the cryptocurrency Facebook plans to launch in 2020.

For instance, many Democrat representatives including Alexandria Ocasio-Cortez seem to be against Facebook’s coin concept during the hearings. The New York Democrat representative asked Libra CEO David Marcus who backs the financial underpinnings of the planned Facebook currency. “So we are discussing a currency controlled by an undemocratically selected coalition of largely massive corporations,” Ocasio-Cortez said to Marcus, unimpressed with his testimony. Financial Services Committee representative Patrick McHenry (R-N.C.) commended Satoshi Nakamoto’s creation, meanwhile. However, Aslam writes this week that the congressional hearing and “the scrutiny of Facebook’s cryptocurrency has hit bitcoin’s price.” Sharing his opinion on July 17, the analyst stated:

Speaking purely from a price action perspective, the Bitcoin price declined as much as 8.9 percent during the hearing and for the week it is down nearly 16 percent. The price has found its support near the 50-day moving average which is trading at $9,311. If the price falls below the 50-day moving average, it is likely that the price may continue to move lower and find support around the area of $7,418. The 242-day moving, which has an impressive track record, is something that I am looking at closely. It is trading at $6,983 and the price must stay above this line in order for the bulls to keep their hopes alive.

Ceteris Paribus from the crypto analytics firm Messari believes the current BTC market cycle is very similar to Amazon stock during the dotcom bubble. “Not all bubbles are created equal — The latest BTC cycle mirrors Amazon during the dot-com bubble, but the recovery has been much more swift — Even with the recent sell-off, bitcoin is 54% down from its high, vs. the 85% Amazon was trading at over a similar timeframe,” Paribus tweeted on July 17. “Why is this relevant? While different assets, they both traded on pure speculation — Bubbles follow similar patterns, but the quick BTC breakout has been extremely bullish. Only natural to see a bit of a pullback here — Still much further ahead than most people imagined in December.”

Miners Will Defend the Price of BTC

According to trader and analyst Filb Filb, miners will defend the price of BTC if it sinks to a certain point. “I have seen a lot of hysterical calls for bitcoin to find new lows and want to revisit a logical economics-based approach which helped me call the 2018 bottom to near perfection and why I do not believe bitcoin will find new lows,” the trader wrote on Wednesday.

By using certain tactics, miners will always maximize their rate of returns. “As Satoshi said himself rightly pointed out that commodity costs are likely to gravitate to production cost. Why? Because miners will sell into demand where revenue per unit > MC. Likewise, collectively they are disincentivized to sell when revenue

We have also seen the pre halving hype bottom out at 2x the cycle bottom historically — Go look for yourselves. Coincidence? I think not.

According to a Reuters interview with Bin Ren, CEO of Elwood Asset Management, hedge funds and money managers are using algorithms capable of identifying cryptocurrency price clues throughout forums and social media platforms like Twitter. Reuters reports that the use of these algorithms has been growing fervently among traditional market managers. “It’s an arms race for money managers — Very few players are able to implement and deliver it, but I believe it is highly profitable,” Ren told the news outlet. Moreover, Bitspread, the digital asset management service based in London and Singapore, also uses social media algorithm techniques to profit.

“It’s a matter of gathering all the info, trying to understand who is trading where, what kind of liquidation can appear,” Bitspread CEO Cedric Jeanson said. “It’s a strategy that makes sense.”

Despite the Possibility of BTC Prices Declining Below $7K, Market Parabola Is Still in Play

Well known Twitter cryptocurrency analyst Mr. Anderson detailed that BTC has very strong parabolic trend lines and the lowest band is under $7K. Essentially this means that despite BTC’s current price decline, the bull run could still be in play. For instance, despite the 10-25% dips for most digital assets within the cryptoconomy, the majority are still way up in comparison to the December 2018 lows.

Any of the parabolic trend lines could act as a support for BTC but calling large ones is very difficult according to Mr. Anderson. “BTC Parabolic Curve: Calling the end of a large Parabolic Curve is NOT EASY — It seems obvious and that is why it is hard. We already have a couple of fairly logical para-trend lines that we had to cancel and we have a couple more that may end up being canceled as well,” Anderson explained on Twitter in reference to his parabolic trend line chart.

Overall, digital asset markets have still gained significant value in the midst of worldwide economic fears. However, retail sales in June were better than expected according to economists and the jump in spending has given them hope. However, in the U.S. some speculators believe that the Federal Reserve might cut interest rates when members of the Fed convene on July 30-31. According to reports, the U.S. Treasury has already priced in the rate cuts in order to bolster loans and lending rates for mortgages.

Moreover, the possibility of a no-deal Brexit is being debated across the U.K. and EU. Economists fear that the U.K. will finally leave the EU monetary system, but waiting for Prime Minister Theresa May’s successor has paused an impending Brexit. With economists watching the global economy closely and politicians scrutinizing digital currencies, how all of this madness will affect cryptocurrency markets going forward is anyone’s guess. Today’s price breakout at 11 a.m, however, suggests that the crypto bulls are still in the game.

Where do you see the price of BCH, BTC and the cryptoconomy going from here? Let us know what you think in the comments below.

Bitcoin Suisse, the Switzerland-based cryptocurrency broker, has taken the first steps to becoming a bonafide bank, the company has revealed....