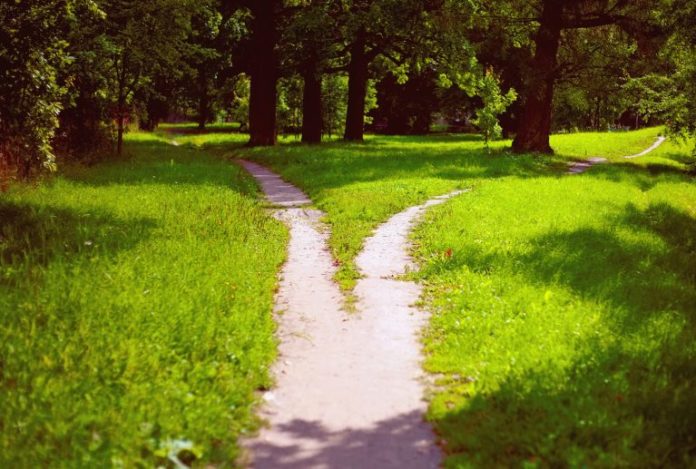 After sitting around $257 billion, the cryptocurrency market lost $35 billion in less than 30 minutes on September 24. Since then, many digital assets have found new support, but bears have started to claw away at these areas. Most cryptocurrencies are testing their weekly support trendline that started gathering steam in May as the market approaches a crucial turning point.

While Holding Foundational Support, Crypto Markets Face a Fork in the Road

On October 20, digital currency markets are meandering at levels not seen since spring and many traders are uncertain where the road will lead. The market cap of all 2,000+ cryptocurrencies is hovering around $220 billion and global trade volume is about $50 billion. BTC has wavered between $7,900-8,090 in the last 24 hours and prices are down 4.7% for the week. The overall BTC market valuation is $144 billion out of the $220 billion, representing 66% dominance over other coins. Ethereum (ETH) is down 5.4% this Sunday and each ETH is swapping for $173. Behind ETH is ripple (XRP) as each coin is trading for $0.29 but prices are up 4% over the last seven days. The stablecoin tether (USDT) is sitting in fourth position today as lots of traders are using the coin to hedge. Tether is capturing the majority of global trades across nearly every digital asset in the economy and USDT is trading $3.8 billion more in volume than BTC today.

The fifth largest market capitalization is held by bitcoin cash (BCH) with a total valuation of around $3.8 billion at press time. Each BCH is swapping for $215 per coin at the moment and there’s a touch over a billion in global trade volume today. BCH is down 0.44% this Sunday, and over the last seven days the asset has lost 4.7%. Additionally, BCH is currently the seventh most traded coin below EOS and above TRX. Tether (USDT) is the top pair traded with BCH, capturing 55% of the day’s trades and BTC has around 20% of trades.

This is followed by ETH (11.6%), USD (10%), and KRW (1%). During the last few weeks, honestcoin (USDH) has entered the top 10 pairs with BCH and currently sits in seventh position. The dumps taking place across the broader crypto markets have caused BCH to slide in value but its has steered clear of a key support level between $195-205.

Traders have seen some significant price movements since the end of September and during this time large holders have been moving massive sums of cryptocurrencies. According to Whale Alert, a Twitter bot that tracks coins like BTC, ETH, XRP, USDT, EOS, BNB, and XLM, millions of dollars (occasionally a billion) in single transactions have been moved by whales.

On October 17, a transaction for 9,999 BTC was seen and millions of tethers are moving between huge wallets and the top exchanges on a regular basis. In addition to the enormous movements, another tracker called Whalecalls shows that a bunch of traders playing long positions on Okcoin are being liquidated routinely. Similar action can be seen on leveraged markets on Bitfinex and Bitmex as well.

People have been obsessed for quite some time trying to figure out why BTC prices move a certain way. The last two weeks of bearish action have been odd to some traders but other speculators believe the volatility is stemming from futures markets. When Bakkt first launched and the price of BTC dropped significantly on September 24, the senior market analyst at Etoro, Mati Greenspan, said: “The catalyst for today’s plunge, in my mind, seems to be the underwhelming launch of Bakkt. [This is a prime example] of buy the rumor, sell the news.” “Bitcoin’s recent price drop is a result of technical and fundamental factors, including a breakdown of the consolidation range, Bakkt’s tame launch of futures, and a sudden network hash rate drop,” explained Joe DiPasquale, CEO of Bitbull Capital, after the initial price drop. On October 13, Zak Selbert, chief executive of Indexica, explained that the action is due to BTC’s maturity in traditional capital markets.

During the last two weeks or longer, the general sentiment throughout the cryptoconomy has been quite bearish. At the time of writing, the Crypto Fear and Greed Index (CFGI) indicates that investors are showing a level of “fear.” However, in August the CFGI score was an 11, which pointed to “extreme fear” in regard to the crypto community’s emotions and sentiments. Today’s data stands at 37, which is far better than the summer.

Good potential for a Head Fake in $BTCUSD. Wait for it. https://t.co/JR0rYZdUfS

The CFGI index dropped to a low of 24 on September 27, indicating that even though market trends have been dreary, the general sentiment is improving. While watching BTC/USD movements on October 17, technical analyst John Bollinger stated that there was a possibility of a “head-fake.” Essentially, a head-fake is when an asset’s price makes a swing in the reverse direction out of nowhere but traditionally when prices touch support foundations. All Eyes Are Watching Crypto Charts, Indicators and Any Signs of Forecast Signals

At the time of publication, most digital asset prices are wandering aimlessly just above the support levels held months ago. Traders have their eyes peeled while closely watching moving averages, liquidity, global trade volumes, and major support or resistance levels. It’s safe to say that even the most prescient analysts do not know which way crypto markets will swing from here. However, veteran traders understand very well that market prices are at a pivotal position and face a fork in the road.

Disclaimer: Price articles and market updates are intended for informational purposes only and should not be considered as trading advice. Neither Bitcoin.com nor the author is responsible for any losses or gains, as the ultimate decision to conduct a trade is made by the reader. Always remember that only those in possession of the private keys are in control of the “money.” Cryptocurrency prices referenced in this article were recorded at 11:30 a.m. EDT.