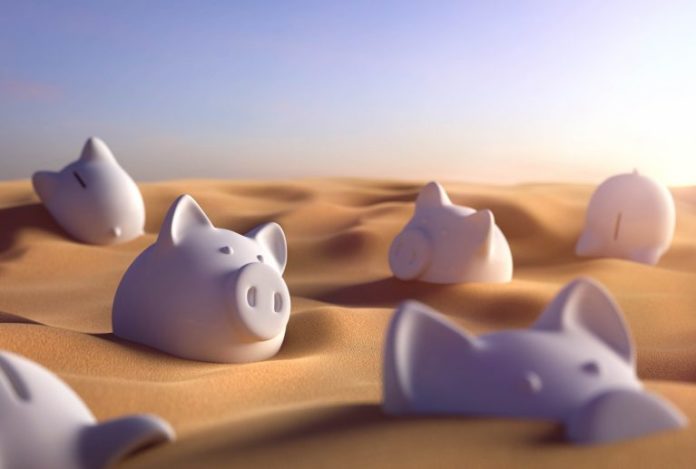 Cryptocurrencies have recovered from losses incurred a week ago, with many digital assets up 50-80% since July 2. For instance, eight days ago bitcoin core (BTC) tumbled to $9,650 and then back to a high of $13,150 yesterday evening. However, during the afternoon trading sessions on Wednesday, most of the top 20 cryptocurrencies have seen losses of between 5-20%.

‘The Slow Death of the Old Financial System’

Cryptocurrency markets have been volatile over the last few weeks. Still, it’s safe to say that crypto enthusiasts and traders have been more bullish in 2019. Since January 1, the price of bitcoin cash (BCH) has increased by 156% and the value of bitcoin core (BTC) has jumped by 205%. On Wednesday, July 10, both digital assets are down as BTC is under by 5.4% over the last 24 hours and BCH by 6.3%. Meanwhile, LTC is down 10%, XRP has lost 8.9%, and ETH has dropped 6.2% in the last 24 hours. Despite the corrections, most coins continue to show higher lows and the eventual return to regions touched on June 28.

The digital asset economy’s latest run up follows the German-owned Deutsche Bank revealing it was laying off 18,000 employees. “The old financial system is dying a slow death — Let’s hope the new one is brighter,” Mati Greenspan, Etoro’s senior market analyst, explained to clients this week. On Tuesday, another analyst from Etoro, Simon Peters, explained in a note to investors that there are lots of crypto investors ready to buy again.

“After slowing to a jog, crypto prices have again started to sprint,” Peters noted. “After the recent strong rally reached a point of indecision, a breakout was imminent — As volumes fell, many investors felt ready to buy in again. Keen analysts of crypto prices will also have seen a ‘flag’ formation in the price charts in recent days and plotted their trading accordingly, which we’re now starting to see.” The Etoro analyst continued:

Investors will be waiting to see whether this rally has enough stamina to break this level. If not, falling back to levels of $7,000 is still highly possible.

The chief market analyst with Thinkmarkets FX, Naeem Aslam, told the media that after BTC jumped above the $10K range in June “it sent a strong signal to average retail investors” that the cryptocurrency was back. Aslam’s outlook on BTC is that it will surpass the $20K all-time high and may even reach $50,000 per coin within the next few years. The Thinkmarkets FX analyst believes that institutional investors are getting involved and adds that Fidelity getting into cryptocurrencies further bolsters his rationale. Aslam believes “it’s only a matter of time before the Securities and Exchange Commission eventually approves a [Bitcoin] exchange-traded fund (ETF).” Lennon Sweeting, the director of institutional trading with Coinsquare Capital Markets, believes these “large investors” are just cashing in on the short-term volatility right now. “There are some key players who hold a lot of bitcoin and can rattle the market,” Sweeting noted.

Bitcoin cash (BCH) markets have moved significantly this year as there was heavy BCH accumulation prior to the rise. “The conservative target for 2019 is $800; the aggressive target is $1,200. These figures are the market’s key long-term resistance levels,” explained an analyst when BCH was trading for $150 per coin. This year the decentralized digital asset has Schnorr signatures added to the chain and Coinflex launched BCH-based physically delivered futures products in February. In March, Crypto Facilities reported on a surge of interest toward its BCH derivatives products when the exchange saw close to $50 million in BCH contracts. At the time, Affiliate Economy Token project cofounder Jason Fernandes explained that smart money was moving into BCH.

“Bitcoin cash saw roughly $10 million per month and we saw that reflected in the price of bitcoin cash when it jumped up last week by something like 43%. I do believe this is a good way to see which way the smart money is moving,” Fernandes detailed in April. Adding more positive news to the BCH ecosystem on Friday, July 5, the Switzerland-based fintech firm Amun AG announced the establishment of a new Bitcoin Cash exchange-traded product (ETP). Under the ticker ABCH, the ETP tracks the performance of bitcoin cash (BCH) and is hosted on Switzerland’s principal stock exchange Six. The CEO of Amun AG, Hany Rashwan, explained that the company is all about providing accessible products to crypto investors and “thanks to this product, investors can now easily add bitcoin cash (BCH) to their portfolio.”

As usual, on the CNBC show Squawk Box and the broadcast’s Power Lunch segment, the guests are still extremely bullish about the upside potential for bitcoin core (BTC). Perma-bull and Fundstrat founder Tom Lee explained during a Power Lunch session after BTC crossed the $13K mark that new price highs are “imminent.” “The fact that Facebook and likely other FAANG companies are going to create their own digital currencies is validating the idea that digital money is here to stay — I think all-time highs are imminent,” Lee told the CNBC hosts. On the Squawk Box show, Golden State Warriors board member and CEO of Social Capital, Chamath Palihapitiya, said that BTC is the best hedge against the antiquated financial system. Palihapitiya insisted:

[Bitcoin] is the single best hedge against the traditional financial infrastructure. Whether you support fiscal and monetary policy or not, it doesn’t matter: this is the shmuck insurance under your mattress.

The Verdict: As the Global Economy Worsens, Many Are Trending Toward Free Market Solutions Like Cryptocurrencies and Safe Havens Like Gold

Overall, crypto market optimism remains high. The traditional global economy, in general, has been bearish for months now and cryptocurrency markets and precious metals have reaped the benefits of the fear. India is experiencing a severe economic slowdown due to the monsoon rains.

In the U.S., market analyst Jim Cramer emphasized on July 9 that “we have a real reason to be worried about the global economy.” Cramer discussed how many companies worldwide are reporting deep losses in earnings. Moreover, the Federal Reserve Chairman, Jerome Powell, told the U.S. House of Representatives that he is concerned about the U.S. economy. In fact, the Federal Reserve and a slew of other central banks have been contemplating or have already lowered interest rates, which have seemingly pushed investors toward gold and digital currency markets. Despite today’s downturn, cryptocurrencies, much like gold, appear to have been beneficiaries of worldwide economic fears.

Where do you see the price of BCH, BTC and the cryptoconomy going from here? Let us know what you think in the comments below.