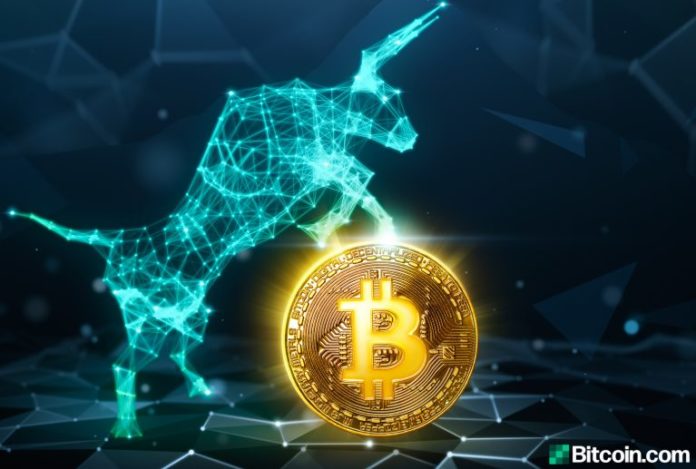 On March 20, cryptocurrencies jumped in value erasing some of the losses that took place over the course of the market carnage last week. The entire cryptoconomy gained a quick $39 billion during Thursday and Friday’s trading sessions and global trade volume has spiked significantly as well. As the coronavirus outbreak has been pushing investors worldwide toward hard cash, BTC gained 11% and BCH jumped 18% during the last day.

Digital currencies are showing some resilience during a worldwide pandemic that has triggered a turbulent economy in every nation. When cryptocurrency trading sessions started during the early morning hours of March 19, BTC was swapping for $5,300 per coin. Since that point, however, BTC prices started gradually moving northbound and by 8:30 a.m. EST, BTC was trading for $5,600. By 2 p.m., the digital asset touched a high on Thursday reaching $6,400 per coin.

At the time of publication, the crypto asset is trading for $6,590 per BTC and the coin’s market capitalization has crossed over the $120 billion mark once again. BTC statistics show the crypto is up 11% for the last 24 hours and up 18% for the week.

Behind BTC, is ethereum (ETH) which is swapping for $143 per coin and has gained 11% today. XRP is trading for $0.16 per token on Friday, gathering 7% in gains since yesterday. The stablecoin tether (USDT) still holds the fourth market cap position on Friday as well.

Bitcoin cash (BCH) commands the fifth largest market valuation and each coin is swapping for $230. BCH has gained over 18% in the last 24 hours and the coin is up 30% for the past seven days. This has given bitcoin cash an increase of 23% in 90 days’ time and 49% up for the last 12 months. At press time, the top trading pair with bitcoin cash is tether (USDT) commanding 65.8% of trades followed by BTC capturing 15.9% of BCH swaps. USD (9.8%), KRW (3.6%), EUR (1.5%), and ETH (1.3%) command the positions below USDT and BTC respectively. Right now, like most cryptos in the top 10, BCH is battling heavier resistance at the $245 region after gathering more gains on Friday.

During a morning note to investors, Etoro’s Simon Peters commented on how BTC has rebounded significantly over the last 24 hours. Meanwhile, Tether Limited, the firm that issues USDT, has minted 120 million tethers and Peters thinks it might make traders believe a big move is coming.

“In the last 48 hours over $120 million USDT has been minted. Tether said this was just an ‘inventory replenish’ that had not yet been issued onto the market. But as this information is publicly available on Twitter, it’s likely that speculators are already starting to jump in because they feel a big buy order may be coming,” Peters said. Despite the gradual increase in price on Thursday and Friday, Peters highlighted that the bears could still bring the price down again.

“It will be interesting to see if demand continues to increase over the days to come and whether we start seeing some more prominent ‘higher highs’ and ‘higher lows’ in price action,” Peters noted. “This would give me more confidence that a recovery is on the cards. But we’re not out of the woods yet.”

A new study from CB Insights details that in 2019 crypto and blockchain startups didn’t get as much funding as they did the year prior. According to the research, venture capital (VC) deals declined in 2019 by 34% from 2018’s $4.2 billion to around $2.8 billion last year.

Despite the year-over-year decline, 2019 was roughly 120% higher than 2017’s $1.2 billion in VC deals. “I don’t think funding [volume] drops are indicative of the health of the industry. … A lot of younger companies are raising rounds,” an analyst at CB Insights, Alex Kern, noted. “Larger, more mature businesses didn’t come back for more capital.” CB Insights also highlighted that VC deals are steadily moving from the West to the East. Kern wrote:

Digital currencies have outperformed fiat currency markets alongside stocks, bonds, equities and commodities during the last two days. For instance, the U.S. dollar has slid to the lowest levels since 2016. Thursday’s stock markets saw some slight gains and stock futures before the opening bell on Friday indicate a rally is in the cards.

Even though traditional global markets have seen some relief they haven’t performed nearly as well as BTC. Denis Vinokourov the analyst from Bequant noted that there were a few different factors to consider. “A combination of factors is driving the market higher,” Vinokourov said. “[Like] profit-taking flow in the options market.” Vinokourov continued:

While bitcoin may have been trading in lockstep with risk assets and in particular S&P 500, it is not the first that the digital asset has established some degree of correlation to traditional assets — Every time, this correlation proved to be short-lived.

Overall, traders are curious about whether or not the current crypto rally will hold or if this is simply a ‘dead cat bounce.’ For now, optimism is in the air but speculation and skepticism about the future of crypto markets going forward continues. So far, with all things considered, cryptocurrency market prices have remained resilient during one of the biggest market crashes in history. While weathering the storm, crypto proponents are also waiting for the BTC and BCH halvings. Bitcoin Cash (BCH) is scheduled to halve in 18 days on or around April 8, and BTC will face a network halving in 53 days on or around May 13, 2020.

Where do you see the cryptocurrency markets heading from here? Let us know in the comments below.

Disclaimer: Price articles and market updates are intended for informational purposes only and should not be considered as trading advice. Neither Bitcoin.com nor the author is responsible for any losses or gains, as the ultimate decision to conduct a trade is made by the reader. Cryptocurrency and stock prices referenced in this article were recorded on Saturday, March 20, 2020, at 9:45 a.m. EST.

How to Stay Anonymous on the Internet

There are people, who still think that the Internet is a place, where you are free to say and to...