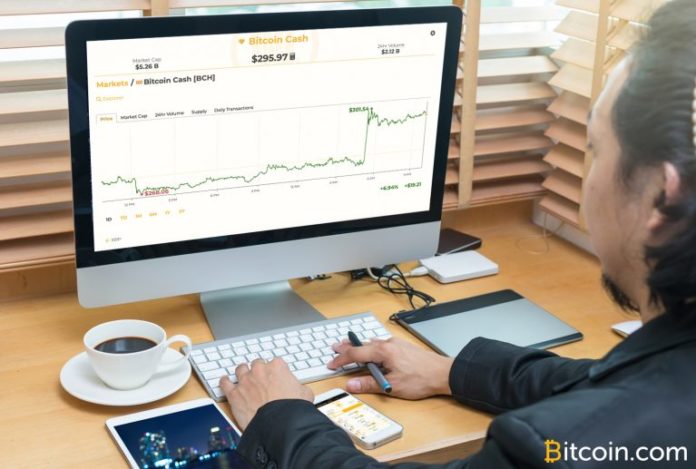 Cryptocurrency markets are seeing fresh gains today as the entire cryptoconomy has gathered $186 billion market valuation after gaining $16 billion over the last 24 hours. The most notable coins leading the charge within the top 10 positions today include litecoin, eos, and bitcoin cash.

$16 Billion Added to the Cryptoconomy

Digital asset markets are doing much better this Friday as most cryptocurrencies have gained between 2-10% in value over the last day. Global trade volume has spiked considerably to around $57.8 billion and there’s been a lot of action during the early morning trading sessions. This Friday, bitcoin core (BTC) is trading for $5,834 per coin and has an overall market valuation of about $103 billion. BTC has seen some decent gains over the last 24 hours with a 6.61% improvement. The second largest market valuation commanded by ethereum (ETH) is around $17.9 billion and each ETH is swapping for $169. Ripple (XRP) is trading for $0.31 per token and has a market capitalization of around $13 billion today. Lastly, litecoin (LTC) holds the fifth position and has seen the highest percentage gains in the top 10 over the last day. LTC increased by 8.81% and each coin is trading for $79. The cryptocurrency eos (EOS) is the second highest gainer in the top 10 with a noteworthy 7.8% gain in the last 24 hours.

The third most illustrious performer within the top 10 is bitcoin cash (BCH) with its 7.8% gains. Bitcoin cash has an overall market valuation of around $5.27 billion and each BCH is trading for $296. BCH is up 12.3% for the whole week and there’s around $2.13 billion worth of BCH trade volume exchanging hands over the last day. The top bitcoin cash exchanges today include Lbank, P2pb2b, Coinbene, Bitmart, and Fcoin. BCH is the sixth most traded coin today below EOS and just above XRP. The top trading pair today with BCH is tether (USDT), commanding 47% of today’s trades. This followed by BTC (41%), USD (5.3%), KRW (3.3%), and JPY (1%). Both the EUR and ETH are also capturing decent size chunks of BCH trade volume as well. Looking at the 4-hour BCH/USD chart on Kraken shows bulls have grabbed the reins again and have captured some of the highs attained three weeks ago. The two long and short term Simple Moving Averages (SMA) have crossed once again and the 100 SMA is coasting above the longer term 200 SMA trendline. This shows that at least for now the path toward the least resistance is back toward the upside. Most moving averages are indicating buy signals but the Ichimoku Cloud (9, 26, 52, 26) baseline is impartial. The Relative Strength Index (RSI) is indicating overbought conditions which could bring a pullback soon. The other Stochastic oscillator shows things are neutral and the MACd currently suggests bulls can still make some higher moves in the short term. Looking at order books shows BCH bulls are currently battling resistance between the $290-300 zone. There will be more pitstops for the bulls between $320-340, just like the BCH market behavior three weeks ago. On the backside, there’s some decent foundational support that the bears must penetrate to push things lower. There are some strong foundations for BCH between the $275-240 regions. The Verdict: A Strange Mix of Doubt and Optimism

Veteran traders and enthusiasts seem positive about the recent gains but the Bitfinex and Tether issues are still looming in the backdrop. For instance, at the time of writing, Bitfinex prices are $330 higher than most spot markets. On May 2, the premium on Bitfinex surpassed the $400 mark or 7% higher than the global average. Still, some people are extremely hopeful things have reversed and the crypto winter may be over. Fundstrat technical strategist Robert Sluymer is known for calling the crash after 2017’s all-time highs and now says it’s time to buy crypto according to a recent investor’s letter.

“Use pending pullbacks to continue accumulating bitcoin in the second quarter in anticipation of a second-half rally through ~6,000 resistance,” Sluymer wrote. The technical strategist sees Q1’s trading range breakout as “the early stage of a longer-term recovery developing.”

What do you think of the crypto markets seeing significant gains before the weekend? Let us know what you think about this subject in the comments section below.