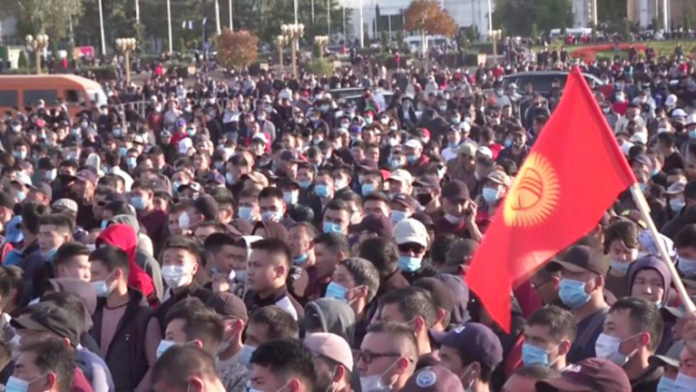 Kyrgyzstan has suspended the SWIFT system and recommended that banking activities be halted until the severe political unrest in the country stabilizes. Massive protests broke out after parliamentary elections as the opposition stormed government buildings and forced the prime minister to resign.

Suspension of SWIFT and Banking Services

The National Bank of Kyrgyzstan announced on Wednesday that the SWIFT system has been suspended in the country as the political unrest intensifies. The central bank also “recommends that commercial banks and non-bank financial institutions suspend their activities and strengthen security measures until the political situation in the country stabilizes.”

The suspension of SWIFT and banking activities followed massive protests that erupted on Monday after the elections in the capital city of Bishkek. Protesters clashed with security forces and broke into the parliament building and the presidential administration building. Opposition supporters seized government buildings Tuesday and forced the cabinet to resign. Kyrgyz President Sooronbai Jeenbekov declared a state of emergency in Bishkek Friday and said he was ready to resign once a new cabinet has been appointed.

An official representative of the National Bank of the Kyrgyz Republic, Aida Karabaeva, explained on Wednesday that the temporary suspension of SWIFT and banking activities aims to prevent capital outflows from the country, adding:

The measures taken are necessary to ensure the security of the system, the safety of assets. The National Bank is monitoring the situation, and as it stabilizes, the banking system will start its normal operation.

In addition, the head of the Union of Banks of Kyrgyzstan, Anvar Abdraev, said on Tuesday that ATMs were disconnected and funds were removed from the machines to prevent operations and looting, Sputnik Kyrgyzstan news outlet reported.

“For small businesses and private transactions, cryptocurrencies can be a significant help,” experts say but warned that “such a means of payment may not be acceptable for large, especially regulated businesses,” Forklog publication reported. Furthermore, the National Bank of Kyrgyzstan has emphasized that cryptocurrencies do not have legal status even though their transactions exist in the country.

In August, the Economy Ministry of Kyrgyzstan prepared a draft law requiring miners to register with the country’s tax authorities and report their activities. In June, the parliament adopted the draft law “On Amendments to the Tax Code of the Kyrgyz Republic” in the third reading. It proposes a 15% tax rate for cryptocurrency mining.

What do you think about the situation in Kyrgyzstan? Let us know in the comments section below.

The post Massive Protests Led to Suspension of SWIFT and Banking Activities in Kyrgyzstan appeared first on Bitcoin News.

Bitcoin’s Rally Could Accelerate Towards $12,000 if It Breaks Crucial Level

Bitcoin’s price has finally broken back above $11,000 after a prolonged period of consolidation around $10,700 This move marks an...