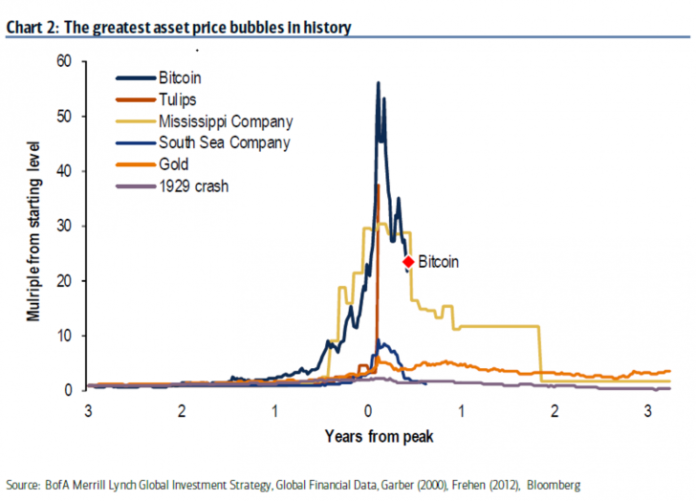 Media coverage this week of the alleged “Bitcoin bubble” and whether or not it is “popping” has resulted in inaccurate claims about the size of the bubble, as well as the same old comparisons of Bitcoin’s rise to that of the Dutch tulips and gold.

Bank of America (BoA) tracked the “greatest asset price bubbles in history:” Bitcoin, tulips, the Mississippi Company, the South Sea company, gold, and the 1929 crash on the chart below, concluding that Bitcoin is the “greatest bubble in history,” according to an April 9 Bloomberg article – a claim apparently untrue both in the history of bubbles and the history of Bitcoin.

Other historical price bubbles have actually seen nearly 80 percent drops like in the dot com bubble in 2002, according to data from Investopedia, and even the BoA-mentioned Dutch tulip bubble is quoted by former UCLA economics professor Earl A. Thompson as experiencing a 99 percent loss, 34 percent more than BTC’s 65 percent drop.

While comparing the previous Bitcoin bubbles to the current “bubble” is not an even comparison, due to the difference in the cryptocurrency’s market capitalization, it may also not be even to compare Bitcoin, a digital currency meant to be used in place of fiat currencies, with bubbles of physical commodities and traditional financial markets.

Among BTC’s drops and rises, the media has continuously reported Bitcoin’s “death.” According to 99Bitcoin’s “Bitcoin Obituaries,” BTC has died 278 times so far, with news outlets covering its “death” 3 times from the price jump period of Jan. to June 2011, 5 times from Oct. to Nov. 2013, and 46 times since the new year (and 17 times during December 2017, the month of BTC’s all-time price peak).

Bloomberg View also published an article yesterday, April 10, entitled, “Bubble trouble: what bitcoin’s woes can teach us,” about the economic reasons why Bitcoin has been prone to so many “bubbles.” The article describes how the Bitcoin’s lack of liquidity and newness as an asset led to its price rise, but that there is also a “third reason for bitcoin’s bubbliness – it was hard to bet against it.”

Since Bitcoin futures entered the market in December 2017 from both CBOE and and CME Group, BTC’s price has fallen, which the article suggests shows that the solution to preventing the “incidence of bubbles” is to “allow more futures trading and other exchanges that let pessimists publicly register their pessimistic beliefs.”

As opposed to the relatively uneven comparison of contrasting Bitcoin’s price to past historical bubbles, some commenters online have tried to come up with other types of comparisons of the cryptocurrency.

BTC “HODLer” Andy Hoffman tweeted on April 9, questioning the label “bubble” for Bitcoin when compared to the price valuations of tech companies:

For those calling #Bitcoin a “bubble,” is $100 billion really a “bubble-like” valuation for the most transformative financial invention in history? I mean, a dying tech dinosaur like IBM is $140 billion, and the anachronistic dead man walking AT&T is $230 billion!

Twitter user Blockchainlife tweeted earlier this week the philosophical question of whether Bitcoin is the “bubble” or the “pin,” a thought echoed by Bitcoin Foundation founding director Jon Matonic earlier this month:

#Bitcoin is not a bubble, it’s the pin. pic.twitter.com/jqcIZRXQbG