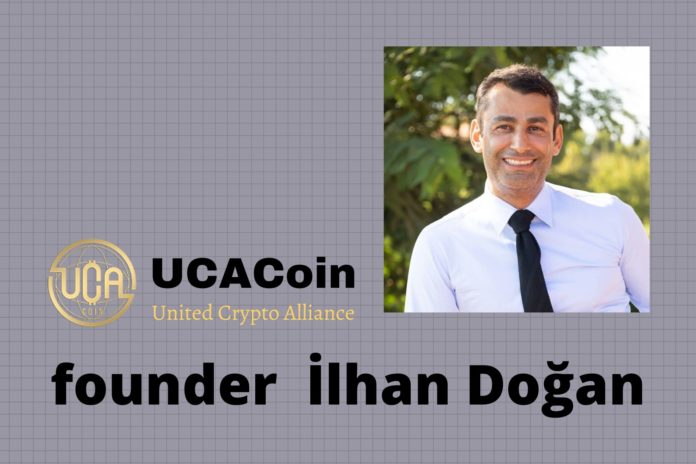 The United Crypto Alliance (UCA) is one of the most forward-thinking alliances in the crypto and financial space that aims to bring crypto use to the mainstream. The UCA Project is fascinating in a way that it touches upon the innovative aspects of digital payments without compromising the core ethos of the financial markets.

The project has got its native cryptocurrency called the UCA Coin which also comes with a physical card called the UCA Card which makes the circulation and distribution of UCA Coin easy and quick.

Well, the brain behind this entire UCA Coin Project is none other than multi-millionaire İlhan Doğan himself. İlhan Doğan is popular as one of the most successful networkers in the world having handled projects worth billions of dollars under his belt.

As a personality known with the sales fraternity, Doğan has worked with over 1million sales partners for his companies and generated over billion-euro sales in the market.

İlhan Doğan has been leading one of the most successful management teams all across Europe and other parts of the world. He has successfully trained over 5 million sales executives while helping them skyrocket their careers.

Understanding the Potential of the Crypto Market

Having been a leader at multiple projects throughout his life, İlhan Doğan recognized the importance and potential of cryptocurrencies early on. Through his intensive market research Dogan found that while a large number of people across the globe are riding on the wave of digitization, the potential within the cryptocurrency market still remains untapped.

Although the interest for cryptocurrencies remains high, Dogan found the crux of the market rejection for mass adoption. He found that “acquiring, holding, transferring and selling cryptocurrencies is too complicated and complex”. Furthermore, cryptocurrencies lack the essential security required to deal with people’s hard-earned money.

He also found that due to these reasons cryptocurrencies have remained beyond the scope of an ordinary person and requires specialist knowledge.

This pushed him to develop his own cryptocurrency that is easy to acquire, store and transfer and addresses every aspect for possible mass adoption in the market.

Details Regarding UCA Coin And Its Entire Ecosystem

The UCA Coin is basically a decentralized cryptocurrency accessible to everyone across the globe. With the UCA coin, the alliance’s main mission is to unite individuals and businesses on a single platform.

The team said that with a strong alliance of global partners, the UCA Coin will emerge as a stable cryptocurrency with long-term potential success. The UCA Coin project comprises of eight strong pillars:

The green electricity project will be one of the unique contributions of the UCA Coin project. The team behind UCA Coin will entirely fund the development and production of green energy through the funds generated from the distribution of UCA Coins.

With Dogan and his team’s efforts, UCA Coin already has a community strength of over 16,000 people. Besides, the team is looking to further expand it to a team of 150,000 people across the globe over the next two years.

In order to give the UCA Coin adoption a further boost, the team will work on integrating UCA Coins with ATMs by the second and third quarter of 2020. During the same period, the UCA masternode platform will go live. Also, the UCA Coins will be integrated with the PoS terminals.

In the third quarter of 2020, the team will work on expanding its masternode platform as well as developing its own exchange. Currently, UCA Coin is listed on four crypto exchanges – Vindax, Finexbox, Stex and Crex24 – with over $100,000 in daily trading volumes.

Opportunities for Bitcoin could grow as its top safe-haven rival Gold risks regulatory challenges. The U.S. Federal Reserve might impose...