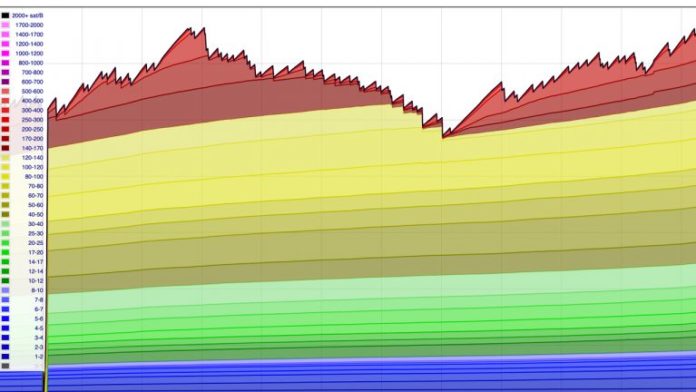 The Bitcoin network hashrate has dropped significantly over the last four days sliding from a high of 161 exahash per second (EH/s) to 90 EH/s on October 27. Today, the Bitcoin hashrate has improved a hair as the network’s security is currently hovering around 100 EH/s. However, the mempool log of unconfirmed transactions has spiked to levels not seen since the 2017 highs.

On Wednesday, October 28, 2020, the Bitcoin (BTC) hashrate is trying to regain what was lost during the last four days. According to statistics, since the October 27 high of 161 EH/s, the network hashrate is down -37.88% at 100 EH/s today. The overall SHA256 hashrate lost more than 40% between the highest point to the lowest metric recorded.

Analysts assume the drop was due to the end of the rainy season in Sichuan China and its been said that miners have been migrating to different regions in the country. The significant drop follows the network’s all-time high when the hashrate spiked to 174 EH/s on October 14, 2020. The executive from the mining organization Hashr8, Thomas Heller, spoke about the hashrate drop on Twitter on October 26.

“Looking at the top 10 pools, we can see approx 22 EH/s left the Bitcoin network,” Heller tweeted. “Not a precise measure of course, but overlaid with the number of blocks mined per day, we can get a rough idea of the hashrate change. This coming difficulty adjustment is one to look forward to,” the executive added.

Not too long ago, BTC’s mining difficulty dropped from the highest point ever at 19.69T to today’s range of 18.60T. With the hashrate so low, miners may see the difficulty drop even lower making it easier to mine bitcoins.

The next expected difficulty change however is still five days away scheduled for on or around November 2, 2020. Today there are 17 mining pools pointing their hash at the BTC chain. The top mining operation today is F2pool with 17.93 EH/s under the hood. F2pool is followed by Poolin, Btc.com, Antpool, and Binance Pool.

Now because the hashrate dropped and it has coincided with the price of bitcoin (BTC) rising, network fees have jumped considerably. Stats from bitcoinfees.cash indicates the next BTC block fee $8.26 and the current median fee is $5.10 per transaction.

Data from the mempool shows there’s 121,000+ unconfirmed transactions waiting to be confirmed. Of course, the wait times have pushed the transaction fee market up because people are paying higher fees to get their BTC transactions confirmed.

For now, miners will have to be patient and wait out the five days in order for the difficulty to drop lower. It is uncertain how much migration is happening in China right now as far as Sichuan operations are concerned, but most of the hashrate losses stemmed from China-based mining pools.

What do you think about the big hashrate drop during the last four days? Let us know what you think in the comments section below.

A recent survey study reveals that more than half of U.S. investors (55%) have an interest in investing in bitcoin,...