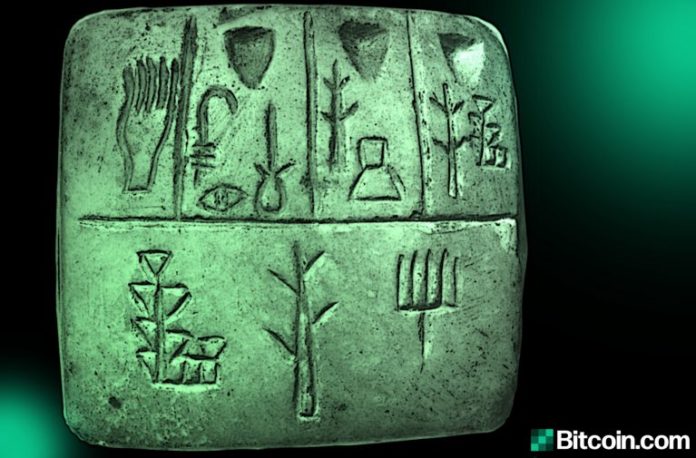 Money is one of the most important but least understood manmade tools in existence. For more than 5,000 years humans have used a tool of exchange called money to facilitate trade. During this timespan, the evolution of money has evolved into a system of information, a social contract, and a ranking system.

The evolution of money has a fascinating history and the birth of the Bitcoin network transformed society’s concept of the subject into something altogether new. In its simplest form, money is simply information, sometimes coupled with physical items, that is traded for goods found or produced by humans. One of the earliest versions of money stems from ancient Mesopotamia (3,200 BC) when people used tablets to account for certain types of goods like grain, meal, and malt. The reason individuals developed an accounting system is because physical items could get too cumbersome to show wealth to others for credit. For instance, if you had six months’ worth of grain in storage, it’s easier to show someone from a distant village a ledger of the goods rather than transporting the grain itself. The first ledger entry systems created by the Mesopotamians were called pictographic tablets.

The Mesopotamians were the first to introduce the concept of a “general ledger,” which summarized an individual or group’s financial information in a log. Thousands of years later, the general ledger transformed into a different system called double-entry bookkeeping. The new method helped facilitate lending between merchants and the Jewish bankers in Old Cairo. Most people recognize the double-entry ledger system initiated in 1340 AD which is known as the Messari. While people still used physical items like coins, the double-entry bookkeeping (DEB) system often acted as the backbone for all the units of money used by the community of citizens. Rather than a simple general record, a DEB protocol required financiers to record a corresponding and opposite entry into two separate categories called debit and credit. The very foundations of the world’s banking system derive from the rankings of capital and debt. Just like silver and gold coins, the DEB system became an implicit agreement that members of society observed to further cooperation and trade. The ledger system and the most popular physical currencies and commodities at the time formed a social contract we call money and society still uses the same system today.

After the DEB system was created, bankers learned how to manipulate the books. For instance, the third parties who were entrusted with the world’s money ledgers figured out schemes like fractional reserve banking. If a man visited his local banker and deposited a few shillings of gold, the banker would take the funds to protect and store and give the man an invoice or a promissory note. The note explained that the man had deposited a number of shillings, he was the rightful owner by possessing the note, and he could redeem it for his shillings. From here humans figured out it was way easier to trade the promissory notes in contrast to trading the heavy and often cumbersome gold. So during the medieval days, people began to trade the notes and humans witnessed the birth of fiat. At the same time, they witnessed the creation of fractional reserve banking because the bankers realized that they could issue more promissory notes than the gold shillings they had kept in reserves, because no one would even know. The citizens did find out later, when the regional economy suffered from rapid inflation and the price of goods began to rise because there were more notes than gold reserves.

News.Bitcoin.com’s recent research report “Money and Democracy: Why You Never Get to Vote on the Most Important Part of Society” detailed how the central banking system was initiated by stock traders using Sweden’s Riksbank and in England when the first central banks were created. Moreover, in the U.S. the Wall Street moguls from the House of Morgan spawned the Federal Reserve. The central banks tied ledger entries as a money system to the state but in a private manner, acting as if they were politically independent. However, the central banks used the force of the state and created a monopoly on minting legal tender. In the mid-1800s the world’s second central bank, the Bank of England (BoE), was the first to issue promissory notes that could be redeemed for gold bullion. The Federal Reserve also had a similar ledger system where issued banknotes could be exchanged for gold. Meanwhile, the governments forced people to pay taxes in the legal tender (central banknotes) and during the late 1900s, most central banks removed the gold backing from issued banknotes. You can no longer redeem promissory notes for gold and you cannot pay taxes with bullion either, which effectively hardened the fiat system into an unnatural monopoly.

The world’s people never had any say when the central banks took over and they do not have a vote when it comes to the globe’s monetary system. Over time the central banks and other financial institutions under their control cushioned a system of fascism, corporatism, and crony-capitalism. Global citizens of the 21st century now have a group of people called the 1%, which refers to the number of people within the world’s population who control the world’s finances. 1% of the wealthiest people control a great majority of the world’s capital, commodities, land, means of production, and political influence. The world’s people (the 99%), through the use of force and coercion, are threatened and required to accept government fiat money as a social contract. Governments and the central banks that produce promissory notes use this money to manage the economy and redistribute wealth. Because the fiat system is manipulated and the central bank’s monopoly is predicated by state violence, the system has created a ranking system of social classes which include the 1%, the rich, middle class, and the poor. All of these social classes are ranked within the world’s economic system of production. (The subject of human classes is a controversial topic, it should be noted.) The social class ranking system is further manipulated by central banks when they issue credit to citizens based on their financial track record. A wealthy individual is more likely to get a bigger loan in contrast to a person who has little to no capital. For some odd reason, humans driven by the desire to fix the large wealth disparity have only made it worse by electing government officials and empowering them to manage the world’s monetary system. The Leviathans’ power in tandem with the central bank’s monetary management of the global economy has become almost invincible.

When Satoshi Nakamoto released Bitcoin into the world, he distributed a very innovative form of money that utilized Professor Yuji Ijiri’s triple-entry accounting system introduced in 1999. The process involves the basics of double entry-bookkeeping, but includes secure and verifiable cryptography. Instead of the debit and credit entries, the underlying assets are kept in one place that’s verifiable by the two parties exchanging. With the case of Bitcoin, the system is a completely transparent ledger. In 2005, the well known cryptographer Ian Grigg designed a robust research paper around the concept of a triple-entry accounting system. But it wasn’t until January 2009 that the first working example of triple-entry accounting was born with Bitcoin. For the first time in history, individuals and organizations had access to a medium of exchange that was not controlled by one individual or a group of people, not issued by a government or central bank, and had zero corporate backing whatsoever. Moreover, due to the innovation of triple-entry accounting and a transparent blockchain, anyone can verify the ledger, unlike central banks printing funds behind closed doors.

Bitcoin has changed the landscape of money because it gives ‘the people,’ or 99%, the chance to redistribute the world’s wealth in a fairer way. Unlike the central banks, it is not private and the protocol can be audited 24-7. Bitcoin relies on a social contract that we as participants all agree upon, which includes: no confiscations, censorship resistance, digital scarcity, and all of these rules can be verified by the public at any time. Bitcoin’s prospects of survival, and thus that of the triple entry-bookkeeping it incorporates, continue to strengthen with each passing year in what’s known as the Lindy effect. It’s up to us as a society to produce reliable money that can be traded for goods and labor, but also remain valuable for daily use as a medium of exchange. With Bitcoin, Satoshi gave us a new type of system that is completely voluntary to use and which may one day change the way the masses use and understand money.

OP-ed Disclaimer: This is an Op-ed article. The opinions expressed in this article are the author’s own. Bitcoin.com is not responsible for or liable for any content, accuracy or quality within the Op-ed article. Readers should do their own due diligence before taking any actions related to the content. Bitcoin.com is not responsible, directly or indirectly, for any damage or loss caused or alleged to be caused by or in connection with the use of or reliance on any information in this Op-ed article.

The post Money and Democracy: How the Elite Manipulated Ledgers and Created a Social Ranking System appeared first on Bitcoin News.

Based on a recent report, the Iranian Economic Commission has finalized an electricity tariff scheme for cryptocurrency miners. According to...