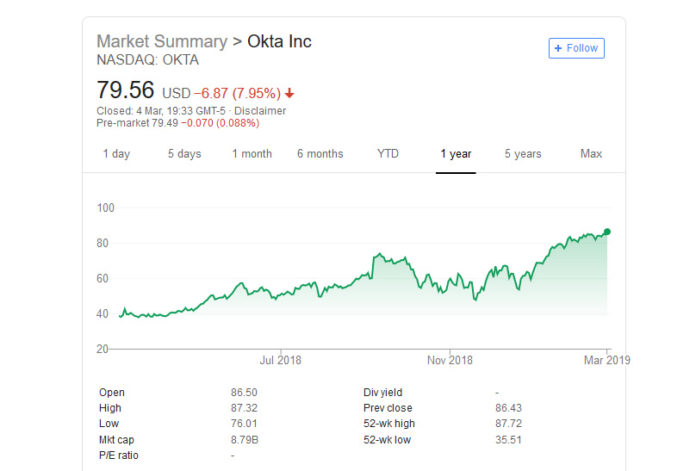 The world of technology has come so far that some people find it hard to think that this sector could keep growing at such an alarming rate.

Are we ever going to be able to come up with something as revolutionary and ground-breaking as the internet?

Some would be skeptical, but on the contrary, I believe that technology is going to explode in the next few years.

Most people might have their eye on the “cool” sectors such as VR and AI. But something as simple as software can revolutionize industries and save billions in man hours

We are literally reaching a point where almost anything is possible. Things we could have never have imagined happening are decades or less away.

The world will be very different in 20 years, of that I am sure, and the companies bringing about this change will become the leading businesses of the future.

So today, we will be looking at four incredibly interesting tech stocks that you should definitely consider investing in this coming year.

Now, Let’s get right into it…

This company is not too well known. You may not be familiar with its market, but don’t let that scare you away from this rising tech stock. Okta is reigning in the benefits from the identity and access management (IAM) market, which is expected to grow into a $22.7 billion industry by 2025.

Okta created its niche in this space with software that helps companies manage their users’ logins and permissions. Okta’s software works as a gatekeeper that grants access to data and files for some while restricting access for others.

The company’s business has benefited as more companies look to manage their users in an ever-expanding digital world. That’s why Okta’s customer count grew by 42% in the most recent quarter to 5,600, and subscription revenue was up 58% year over year. And not only is it increasing subscriptions and customers, but it’s also earning more from them. In the most recent quarter, the company’s dollar-based retention rate was 120%.

These are great numbers, and common sense would tell us that they will keep growing. The need for increased security and restricted access is only going to keep growing. Furthermore, as I have mentioned before, these types of software companies usually have great retention rates, since people don’t tend to change software providers willy-nilly.

The company’s share price is up about 150% over the past year, pushing Okta’s price-to-sales ratio up to a rather large ratio of 23 right now. With companies growing as fast as Okta, investors should expect valuations to be high, and expect some volatility in the share price. But Okta’s working its way toward profitability and delivering strong sales and customer growth, and should continue to benefit as the security management market expands.

While the stock is not by any means cheap and may suffer some ups and downs in the near future, I believe this can be a great investment for the long-term and buying now could really pay off.

Priced at $8.77, this is technically a penny stock. Very affordable and with tonnes of potential.

Glu Mobile makes games for smartphones. It has multiple titles that are gaining popularity for players who use phones or tablets, which is most people nowadays. 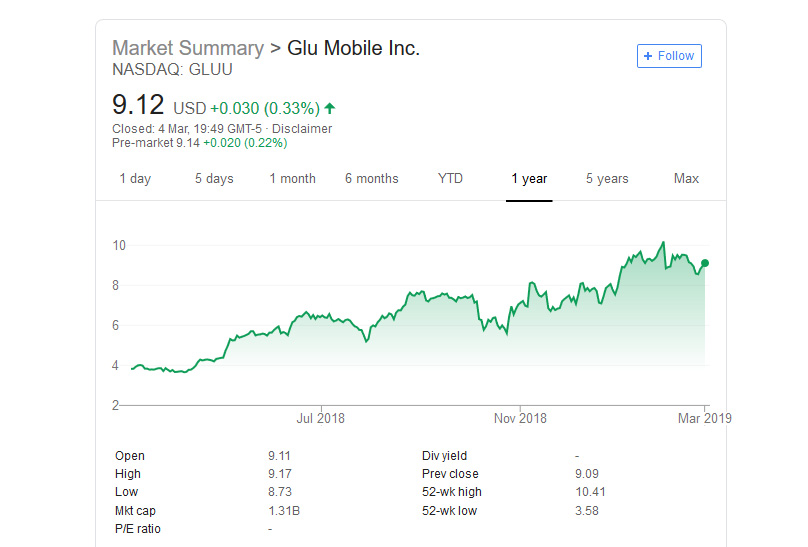 Many of the titles are based on action movies, while others are based on existing console games. Interestingly, its biggest selling title is a casual role-playing game based on the life of reality TV star Kim Kardashian. This celebrity focus helps Glu Mobile stand out in the gaming industry

The company has now managed to get out of debt and has strong cash reserves. Revenues have been rising over the past four quarters, and while operating income is negative, the company has been quickly reducing its losses.

Glu Mobile is spending on research and development to find its next hit. The potential for this stock is based on its industry, as games continue to grow in popularity and gamers are willing to try new games even if they are from smaller companies. The stock gapped up by around 15% as the markets reacted to upbeat guidance issued along with the company’s late-July earnings report, and the shares continued to post gains through the summer. If Glu Mobile comes up with a new hit game, it will likely send the stock soaring even higher.

Mobile games, like mobile everything, are on the rise, and this might be the way for you to cash-in on this rising trend.

Unisys is a global information technology company that builds high-performance, security-centric solutions for businesses around the globe. 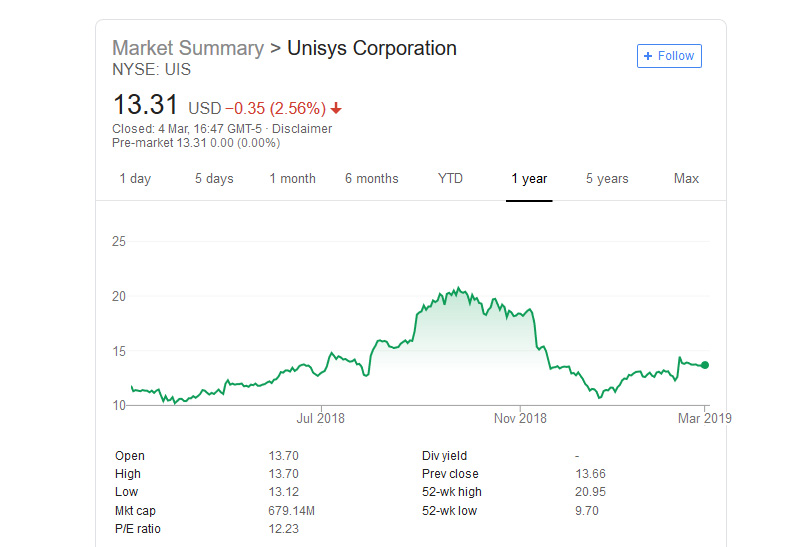 This provider of IT consulting and outsourcing services seems to have been struggling in recent times, but the company and its stock are sure to bounce back before long.

Unisys shares have seen their prices fall 30% lower in the last three months, resulting in rock-bottom valuation ratios. The stock is trading at just 7 times forward earnings and 6.7 times trailing free cash flows, far below the norm in an industry that’s already packed with strong deep-discount investments. For example, IBM (NYSE:IBM) shares can be bought at 9.4 times forward earnings, and DXC Technology (NYSE:DXC) trades at 8.5 times its free cash flows. These are great value stocks, but Unisys is trading even lower.

Now, low share prices aren’t a guarantee of big future returns. The company must also show strong results in order to actually justify this investment.But as it turns out, the bargain-bin discount prices on Unisys shares are based mostly on worries about the company’s pension plan obligations.

It’s true that pension plan expenses hang over Unisys like a dark and expensive cloud, but the company is doing something about it. They renegotiate the pension terms every so often, and the results of these negotiations have been impressive in recent years. Unisys reduced its 10-year pension obligations by $390 million at the end of 2017 and by another $125 million in 2018. Moreover, the company is going through the peak cash impact of its pension obligations right about now — and Unisys appreciates the trend toward rising interest rates because that works out to a positive effect on these pension expenses.

Kraken Robotics Inc. is a marine technology company engaged in the design, development and marketing of advanced sensors, software and underwater robotics for Unmanned Maritime Vehicles used in military and commercial applications. 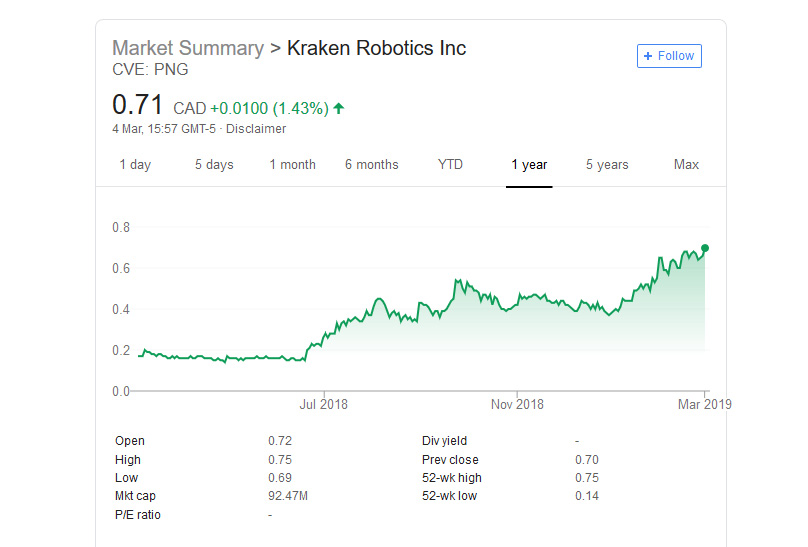 It was ranked as the top technology company on the TSX Venture 50.

Over the course of 2018, the company’s stock grew 117.65 percent in value backed by multiple announcements throughout the year. In November 2018, Kraken Robotics announced its third quarter results where it reported revenues of C$1.6 million and C$5.2 million as its quarterly and then year-to-date revenues. The company also revealed that it had a backlog of C$13 million from various contracts it secured in 2018.

This is certainly a stock worth buying as it is full of present and future potential.

It’s impossible to know how the world will look in 20 years. The possibilities are literally endless.

What we know for sure is that companies and firms will have to adapt or die. Embracing technology is not a choice.

As investors, we must also embrace these new tech companies, even if it means stepping out of our comfort zone and investing in something that we, and most people, don’t know that much about.

It may be impossible to predict the future, but looking at the financials of these tech companies one can find good investments without having to speculate too much.