Mt Gox bankruptcy trustee Nobuaki Kobayashi has released a document detailing measures taken to secure the interests of creditors, specifically, the sale of large amounts of cryptocurrency for fiat money.

According to the document, these measures were a requirement of the bankruptcy proceedings and based on the findings of a February 2018 examination report.

The document explains that Kobayashi sold an amount of Bitcoin and Bitcoin Cash as “a measure to secure interests” for creditors who had filed claims. The sale took place between March 2018 and “the commencement of Civil Rehabilitation Proceedings, and secured a certain amount of money for the bankruptcy estate”. The release of large amounts of BTC has been seen as the reason for major drops in the price of Bitcoin.

The trust, which holds the money, was set up between Kobayashi and the Sumitomo Mitsui Banking Corporation, a major Japanese bank. At the time of establishment, it held 15.8 billion yen.

The documents adds that as a result of the sale, the trust already holds “a suitable amount of money to secure the interests [of] BTC creditors under the Bankruptcy Proceedings in connection with BTC claims to be treated as
non-monetary claims under the Civil Rehabilitation Proceedings.”

B2Broker’s Arthur Azizov: ‘Finteсh Startups Do Not Need to Reinvent the Wheel’Go to article >>

The bank is the trustee of the first section (‘trust agreement’), and provides a guarantee for those that have proved that they lost money. The second section (‘guarantee entrustment and guarantee agreement’) sees creditors who filed proofs of bankruptcy claims as ‘third party beneficiaries’, to be paid out of the trust. 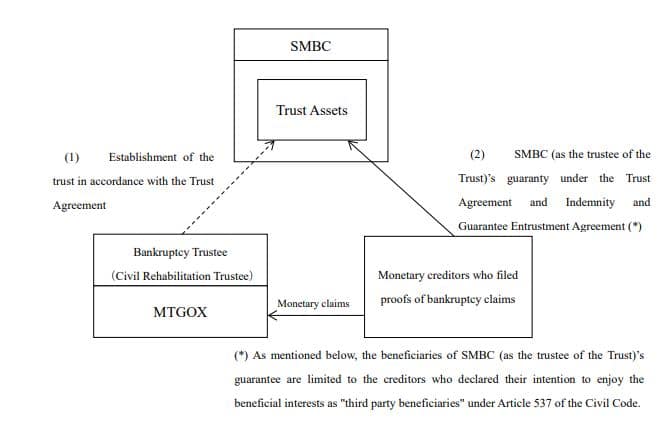 Mt Gox was the world’s dominant Bitcoin exchange until 2014, when hundreds of millions of dollars’ worth of cryptocurrency was stolen in a hack. The culprits were never found, the exchange went bankrupt, and many people lost a lot of money.

The bankrupt business began a stage of its rehabilitation process last week, announcing that users of the exchange have until the 22nd of October to file a claim. Potentially, approximately $1 billion worth of Bitcoin could be re-absorbed into the market as creditors are repaid.

The repayment process began in June 2018, when Tokyo District Court officially ended the bankruptcy of the Bitcoin exchange and move it into civil rehabilitation.