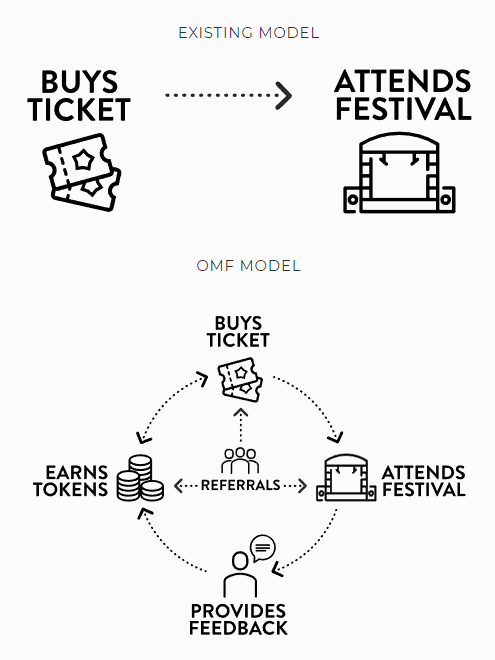 There has been an explosion of music cryptocurrency projects over the last couple of years. Ujo, Musicoin, Voise, Muse, Opus, Choon, you name it. Just change a letter of a popular word and presto, you have a brand new project you can bolt blockchain onto. Jokes aside, the market is incredibly saturated and many ICOs, despite all the promises, have yet to provide any noticeable value.

One company is approaching the scene from a completely different angle. Our Music Festival is a project built around disintermediating the music events business. And unlike ICOs, it’s not raising public money on the back of wild revolutionary promises. At least not yet.

Who Is Our Music Festival?

OMF was created in collaboration between renowned DJ 3LAU (Justin Blau), blockchain entertainment network SingularDTV, and concert and event company Prime Social Group. SingularDTV is a ConsenSys-backed venture that funds decentralized applications built on top of Ethereum. Additionally, the founders of Origin Protocol will also be advising the OMF crew.

Blau credits the Winklevoss twins for introducing him to crypto during the time they were building the Gemini exchange. Our Music Festival is currently piloting out of California, Berkeley to be exact. They do, however, have ambitious hopes of expanding globally in three years, bringing the idea as far afield to places such as Barcelona, Seoul, and Tokyo.

What Problems Are They Trying to Solve?

The music events industry is suffering from the same kind of monopolistic and rent-seeking practices of just about any other. Ticketing monopoly, in particular, has gotten worse in recent years thanks to large acquisitions and a reduction in competitors. OMF believes that will all change when artists can give more control to fans over ticket purchases and their overall festival experience.

Bringing these components into the blockchain will ideally prevent issues like ticket inflation. Ticket inflation is very often caused by programmers who use bots to buy tickets en masse when they are released. Unfortunately, the general public loses out and these scalpers then sell the tickets at inflated prices on secondary markets.

In an interview on Hackernoon, 3LAU explains that artists would also ideally like more control over the marketing process. In comparison to the performers, promoters are not as in touch with the fans. Blockchain could also theoretically enable artists to reclaim the data and analytics related to their shows.

Promoters, who usually hold this data, have the additional advantage of selling it on as another source of revenue. In the OMF model, fans can opt into giving away that info and receive cryptocurrency in return. Instead of extracting value from fans, Blau hopes the new model will share in the value creation process and reward fans for feedback and referrals.

Putting It into Practice

Fortunately, OMF is not just talking this idea up like so many of their ICO counterparts. Last year, they held their very first music cryptocurrency festival at the Greek Theater in Berkeley. The party featured the likes of Mati, Kim, 3LAU himself, and Grammy award-winning artist Zedd. A crowd of around 8,000 people showed up to the party, which even included some crypto celebrities like Fred Ehrsam (founder of Coinbase) and Adam Ludwin (CEO of Interstellar). It goes without saying that 3LAU did his part to promote blockchain whenever he had the chance.

OMF tokens were available to purchase at the event enabling party-goers to purchase tickets and get discounts on merchandise and food. In total, 2,000 plus cryptocurrency payments were recorded, which is pretty remarkable given the size of the crowd. That, in part, highlights how the younger generation is warming to crypto as an alternative to exclusive fiat systems. It also shows just how important it is for tokens to actually have some utility in the network.

The first ever @ourmusicfestival is in the books! Thank you to everyone who came out last night! #OurMusicFestival2018

Fusing the Physical with the Virtual

Towards the end of 3LAU’s set, support crew fired huge amounts of confetti into the crowd. What first appeared to be a standard crowd-pleasing stunt turned out to actually be another opportunity to promote crypto: thousands of paper crypto wallets in the form of QR codes. Savvy fans could later redeem their crypto for different colored friendship bracelets.

This was all done via the OMF app that developers had created specifically for the event. Unfortunately, quite a few fans reported that the user experience just wasn’t up to scratch. That didn’t seem to dampen the mood of the party, though, and despite the issues, you would’ve been hard-pressed to call the trial anything but a success.

Moving Towards a Music Cryptocurrency Future

It’s refreshing to see a project actually putting its money where its mouth is. In an industry flush with cash and filled with promises there may not be that many incentives for projects to go the full distance with their visions. That being said, one festival is not enough to call the OMF project a success, yet. For one thing, a lot more work needs to be done on the app. Nobody wants to fiddle with their phones all night at a concert. It’s safe to say that the event was more of a successful trial than a polished showcase. And that’s ok. Just like blockchain, OMF is in its early days of development and will need time to mature.

The OMF token is not currently available for purchase outside of the actual festivals. That may turn out to be a good thing since so many people are currently focused on the speculative nature of cryptocurrency instead of its actual utility. The irony is that when projects build first for the utility they’ll end up creating tokens in huge demand. Will OMF be the project that moves the music events business forward? Who knows. If the success of the first Our Music Festival at the Greek was anything to go by, the future looks promising.