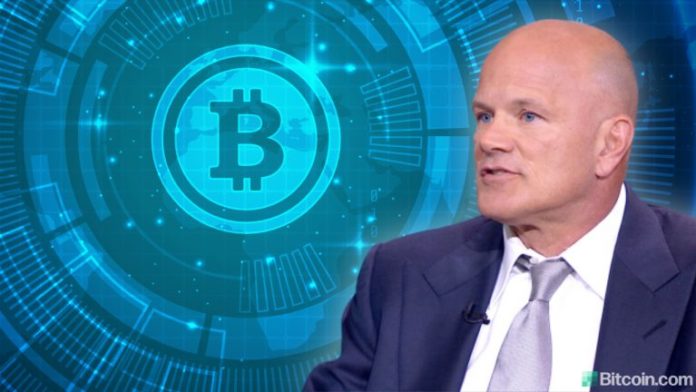 Galaxy Digital CEO Michael Novogratz said on Tuesday that bitcoin and gold have more room to grow and will continue to rise due to global “liquidity pump,” afforded by governments’ stimulus packages, coupled with an influx of retail investors.

“The liquidity story isn’t going to go away. We’re going to get a big stimulus,” the billionaire investor told CNBC, adding that “it doesn’t look like the Federal Reserve is going to raise rates.” After the CARES Act, the $2.2 trillion coronavirus aid stimulus package which President Donald Trump signed into law in March, Republicans and Democrats have both proposed further stimulus packages. The Democrats proposed the $3 trillion HEROES Act while the Republicans introduced the $1 trillion HEALS Act on Monday.

Furthermore, “Bitcoin still has a lot of retail interest in it,” Novogratz described, adding that he sees stock investors shifting back to gold and bitcoin.

Novogratz expects bitcoin’s price to be at $14,000 in the next three months, emphasizing that it could easily reach $20,000 by the end of the year. His year-end price prediction agrees with several others, including a comprehensive analysis by Crypto Research Report.

Novogratz said most of his investments have been in bitcoin, gold, and silver. Noting that an estimated 20% of his net worth is in bitcoin, he added: “I want it to go a lot higher.” As for gold, he said it is more of a 5% position for him.

The billionaire investor further emphasized that he is starting to see institutional investors move into bitcoin. However, unlike gold investing, they face a learning curve when trying to invest in cryptocurrency. “Bitcoin is still hard to buy. If it was easier to buy, it would be a lot higher,” he previously said. “Gold has been around for 3,000 years, it’s pretty easy to buy,” Novogratz opined. “There’s an adoption game in bitcoin that you don’t have in gold. But I like them both.”

Others have also reported seeing increased institutional demand for cryptocurrency, particularly bitcoin. Grayscale Investments said that in the second quarter, 84% of its almost $1 billion inflow into crypto investment products were from institutional investors. Moreover, famed hedge fund manager Paul Tudor Jones recently confirmed that he has almost 2% of his assets in bitcoin.

What do you think about Novogratz’s prediction? Let us know in the comments section below.

XRP’s price rallied overnight and is finally starting to see some of the momentum that has recently been incurred by...