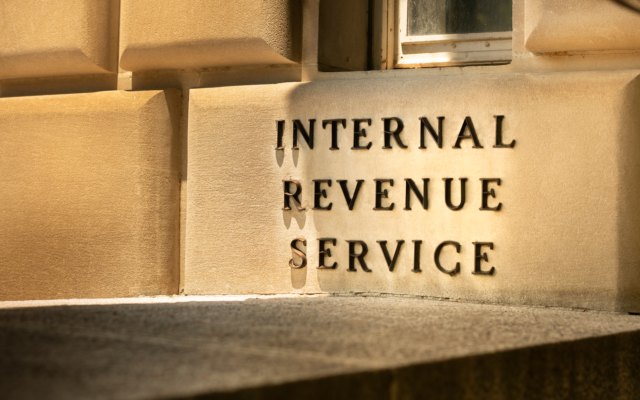 With Bitcoin spiking more than 120 percent since the start of 2019, the U.S. Internal Revenue Service (IRS) says it is readying an updated set of guidelines to cover cryptocurrency taxation.

In a letter to a bipartisan group of U.S. Congressmen, the IRS Commissioner Charles Rettig declared that clear-cut Bitcoin tax guidelines were a top priority for the agency. The letter was in reply to an April 2019 letter from the 21-member congressional coalition led by Rep. Tom Emmer (R-MN).

An excerpt from the reply sent by Commissioner Rettig reads:

I share your belief that taxpayers deserve clarity on basic issues related to the taxation of virtual currency transactions and have made it a priority of the IRS to issue guidance. Specifically, your letter mentions (1) acceptable methods for calculation cost basis; (2) acceptable methods of cost basis assignment; and (3) tax treatment of forks. We have been considering these issues and intend to publish guidance addressing these and other issues soon. 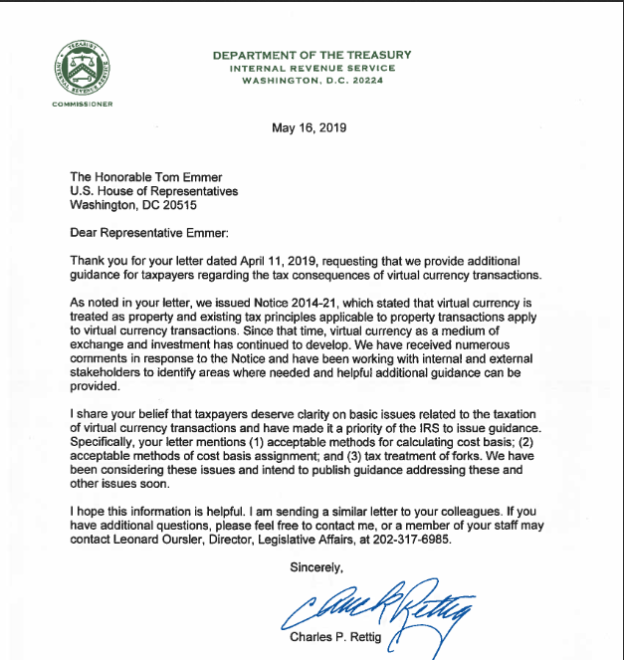 The timing of the IRS’ statement comes as Bitcoin in enjoying a stellar price run, having more than doubled since January 2019.

How timely… BTC spikes and the IRS commissioner decides to comment 😉

As previously reported by Bitcoinist on multiple occasions, there have been calls for a more definitive structure for Bitcoin taxation in the U.S. Several institutions and stakeholders have decried the ambiguous nature of the current IRS crypto tax framework developed in 2014.

Both the American Institute of CPA and the Treasury Department have previously called on the IRS to provide clear guidance on the Bitcoin taxation process. Many critics of the current framework say taxpayers bear too much of a burden trying to follow pre-emptive steps to avoid falling into the trouble of cryptocurrency-related tax evasion charges.

Bitcoin is Both Currency and Property

Back in 2014, the IRS chose not to recognize Bitcoin and other cryptos as currencies, characterizing them as property. Thus, their exchange falls under the purview of capital gains tax.

Fast-forward to 2018 and the IRS says cryptos are a digital representation of value akin to traditional fiat currency. This declaration opens the door to income tax considerations for virtual currency transactions.

Selling crypto for fiat (e.g., USD) is a taxable event.

Trading one coin for another is a taxable event.

Using crypto to purchase goods or services is a taxable event.

Then there are also the implications of using Bitcoin and other cryptocurrencies to make purchases. Back in March 2019, Bitcoinist reported that the proposed Bitcoin for Starbucks coffee as part of the Bakkt–Starbucks agreement might bring up additional BTC tax filing palaver.

I trade the “magical internet money” on infrastructure that does not belong to ANY sovereign state, it’s a non productive asset depending on 0 state owned common goods, to avoid sovereign theft, aka taxation

There are, however, stakeholders in the industry who believe cryptocurrency shouldn’t fall under government tax. Tweeting on Monday, Dovey Wan of Primitive declared that paying capital gains tax of cryptocurrency transactions was “a joke.”

Do you think taxes on cryptocurrencies are lawful? Let us know in the comments below.

The post Of Course, The IRS is Updating Its Bitcoin Tax Guidelines as Price is Rising appeared first on Bitcoinist.com.