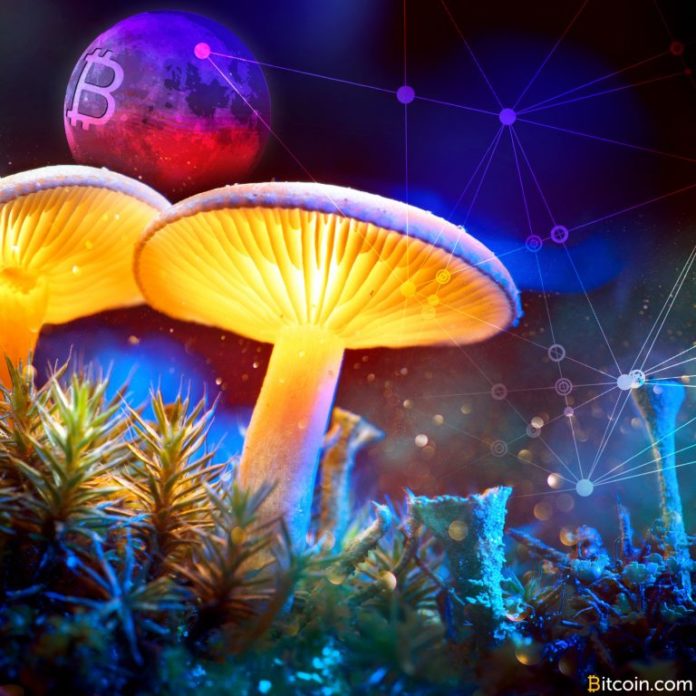 The following opinion piece on Moonshots and Mushrooms was written by Max Borders, director of Social Evolution and author of The Social Singularity.

When John F. Kennedy was president, he planted a stark and powerful, technocratic image in the minds of Americans…I believe this nation should commit itself to achieving the goal, before this decade is out, of landing a man on the moon and returning him safely to the Earth. No single space project in this period will be more impressive to mankind, or more important for the long-range exploration of space; and none will be so difficult or expensive to accomplish.

Nations don’t make commitments, of course. People do. And Kennedy was essentially making a commitment on behalf of 190 million people with 190 million different plans and projects. Still, most people don’t question the grand designs of soothing orators or national father figures, because, well, democracy. And a man… on the moon!

But this type thinking is not just a holdover from the 1960s. And we should be fair to the spirit in which the term moonshot is used in certain contexts, namely an ambitious project that has a reduced likelihood of success. And we don’t want to dismiss this connotation out of hand.

Still, even the most pro-market, pro-business enthusiasts fall under the spell of the moonshot Mentality (defined more as big projects requiring big plans and big money). Maybe it’s because they like space or because they think Elon Musk is cool.

Proponents of moonshots as a method of innovation such as Peter Diamandis, founder of XPrize, are constantly suggesting that what’s really needed to push humanity forward is “10x” thinking, or imagining a solution or outcome that’s ten times as big as what you might normally imagine. I recently watched a lesson Diamandis gave on “exponential thinking” and he used Elon Musk as an example. [Diamandis] described Musk’s vision and mindset. Diamandis then suggested that young people should follow in Elon’s footsteps, eschewing economic activities that don’t ignite their “passion” and to focus on solving problems that will have a massive impact. Young people certainly have gone gaga over Elon Musk, even as they ignore Jeff Bezos. Many were agog at the Musk’s appearance on Joe Rogan’s videocast. And Musk dazzles people with all manner of moonshot projects, most of which require massive taxpayer subsidy to exist at all.

But the moonshot mentality can go too far.

When implemented, moonshots — big, audacious, expensive projects — suck massive resources away from more generative forms of human action that operate within the bounds of iteration, affordability and testability.

Musk, like Kennedy, is good at casting a spell over those from whom all the largesse is taken–especially as these projects end up costing 10x more than initially proposed. But he is not very good at evaluating the systems-level implications of his spells. After all, most moonshots are wasteful projects. And they require heaps of resources to paper over all failure and fragility. They tend to focus on “gee whiz” benefits as opposed to far less visible costs.

$110 billion dollars (in today’s value) was spent on the Apollo project. This is a massive investment in what was essentially an enormous geopolitical pissing match between the United States and the USSR; however, as soon at the USA no longer needed the marketing campaign of moon travel, the entire lunar project withered and died.

With a nod to Frederic Bastiat’s “That Which is Seen and That Which is Unseen” we have to ask: What sorts of things never sprang up from all those resources that were taken out of circulation? What sorts of innovations, even if they might have started out as small and boring solutions, never blossomed in the way that would have given rise to thousands of humanity-improving projects? Much less juggernauts similar to Amazon, Uber, Facebook, and AirBnB?

Still, what sort of alternative is there for solving big problems? I remember attending a conference dedicated to ways to help Puerto Rico in the wake of Hurricane Maria. Some in that group were clearly under the spell of the moonshot mentality. (Someone even suggested a hyperloop near the Port of Ponce.)

I turned to the man who had assembled the group, Mr. Hanusa, and said: “This is going to sound weird, but I wonder if thinking on Puerto Rico’s recovery needs a different guiding metaphor than moonshot–something more like mushroom spores.”

“You mean like a mycelial network?” Mr. Hanusa said.

While mushrooms might be the most familiar part of a fungus, most of their bodies are made up of a mass of thin threads, known as a mycelium. We now know that these threads act as a kind of underground internet, linking the roots of different plants. That tree in your garden is probably hooked up to a bush several metres away, thanks to mycelia.

The more we learn about these underground networks, the more our ideas about plants have to change. They aren’t just sitting there quietly growing. By linking to the fungal network they can help out their neighbors by sharing nutrients and information – or sabotage unwelcome plants by spreading toxic chemicals through the network.

Mycelial (MY-SEE-LEE-AL) networks are not centrally planned, but nature’s peer-to-peer processors. And like all natural phenomena, mycelial networks are products of evolution and emergence.

Mycelial thinking means, rather than asking who’s going to do what, one asks: within what simple rules are the goings-and-doings of agents likely to be the most robust and prosocial? These systems are about organic growth and development from the bottom up, as opposed to engineering from the top down. Such thinking, of course, involves a biological metaphor, whereas moonshot thinking is a holdover from a machine metaphor.

Moonshot Mentality: Big problems require big projects. Solutions must be at least as bold as the severity of the problems they seek to address. Want to power the masses’ homes and businesses? Build the Hoover Dam. Want to cure all that ails Puerto Rico? Build a hyperloop. Want to show the Soviets who’s boss? Build a rocketship that will carry Americans to the moon. We need brilliant engineers to think in complicated ways until a complete solution can be fully conceived, blueprinted, and built.

Mycelial Thinking: Big problems require a thousand different experiments, most of which will start small but have the potential to scale to the level of the problem. Such experiments will be carried out in self-organizing networks of experimenters with superior means of collective intelligence. These networks attack the problems from various angles. Indeed, problems often aren’t one big monolith, rather a cluster of interrelated problems. We need a cluster of interrelated solutions. We need brilliant people to think about protocol-level rules, so that complex, multivariate solutions can emerge–even if we don’t yet know what they are. Sowing the Seeds of Emergence

It’s no wonder that moonshot thinking gets all the attention and budgets from bureaucrats. A single project with a visualizable product is sexier and easier to sell to the laity. Can you imagine trying to get popular support around something so abstract and prosaic as an economically diverse, thriving human ecosystem?

In fairness to Peter Diamandis, he and Steven Kotler do employ a fair amount of mycelial thinking in books like Abundance and Bold. They use the term “exponential technology,” the precise meaning of which doesn’t exactly parse any distinction between moonshots and mushrooms. But our call, of course, is to move away from the former mentality, towards the latter.

Happily, we don’t generally have to sell mycelial thinking to the masses. Instead, we have to be a smart, determined swarm of local innovators willing to make new rules for new systems into which people migrate. In other words, the easiest way to bring down the old order is to sow the seeds of emergence.

Insider sources have suggested that the Hong Kong Stock Exchange (HKEX) is eyeing takeovers in the blockchain and other tech...