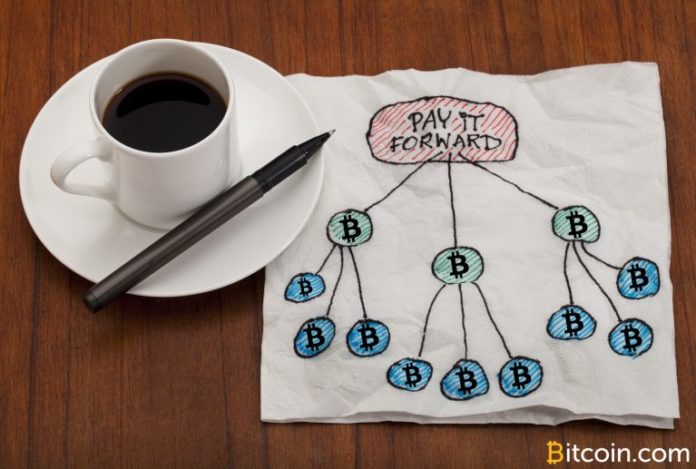 Over the last two days, Bitcoin Cash (BCH) supporters have noticed a Twitter handle called @Bitcoininfo tipping a bunch of random individuals and nonprofit organizations significant amounts of BCH. The Twitter profile with 107,000 followers revealed on April 26 that it gave away $10,000 in BCH using the tipping bot Tippr.

This week the BCH community and nonprofit organizations witnessed a lot of BCH tipping on social media. A Twitter handle that goes by the name @Bitcoininfo spread BCH around the web using Tippr, the social media tipping bot that dispenses BCH. The Twitter account gave away a total of $10,000 worth of BCH over the last 48 hours with its last 0.2515 BCH going to the charity @Eatbch.

The Twitter handle gave away funds to people like popular libertarian blogger @Libertydoll who had her Paypal account suspended, the group Find Bitcoin Cash, Bitcoin ABC, Bitcoin Unlimited, Flowee the Hub, Libre Office, Openbazaar, and a ton of other random people on Twitter. Some people simply asked the Twitter handle for money and the account just gave them a $50 tip in BCH. One person asked “Can I get $50?” and @Bitcoininfo replied “No,” before sending the user $51 instead.

The Twitter account also tipped well known crypto luminaries like the developers Jeff Garzik and Gavin Andresen. After giving away countless tips of $50-500 fractions of BCH, the Twitter handle would sometimes tell the user to “spend it, save it or pay it forward.” Some BCH fans did in fact tip other users after getting a tip from the mystery Twitter account. @Bitcoininfo dispersed much larger $500 increments to nonprofits like the Water Project, Tor Project, Eatbch, Bitcoin Cash Association, Coindance, Pathways Canada, the Internet Archive, Ethiopia Aid, East African Center, Gnome Foundation, and Electronic Frontier Foundation. After tipping so many random individuals and organizations, people really began noticing @Bitcoininfo’s generosity. Reddit users on r/btc started tallying up all the funds the account gave away when it reached $6,600. A Generous OG Bitcoiner from 2011

Seeing how the account joined Twitter in 2011, one user wrote that he loved seeing early adopters who are “supportive of ecosystem development” give so much. “Looks like @Bitcoininfo is one of the many early Bitcoiners that understands that Bitcoin Cash is Bitcoin,” the commenter on r/btc remarked. “I actually use Bitcoin now (aka: bitcoin cash) — Some people don’t seem to understand that using it as a medium of exchange is making it valuable,” @Bitcoininfo tweeted on April 26. On the same day, the Twitter account stated that it had emptied its tip wallet after giving away fractions of BCH to numerous individuals and nonprofits.

“My Tippr bot wallet is empty now,” @Bitcoininfo detailed on Twitter. “That was $10,000 worth of bitcoin cash in Twitter tips.” Of course, the BCH community was thrilled to see the “OG bitcoiner” give away thousands of dollars in bitcoin cash. Many supporters wholeheartedly believe that actually using the cryptocurrency goes much further than holding digital assets for speculative purposes. The mysterious BCH tipper on Twitter is still continuing to spread the word about the benefits of BCH to various people and charitable causes. After the giving spree ended, @Bitcoininfo asked the Bitgive founder Connie Gallippi on Friday if the nonprofit accepts bitcoin cash.

Have you seen our Bitcoin Cash (BCH) tips generator? Anyone can create tips in order to give BCH by email or printable tickets. Recipients easily redeem tips by visiting a web page with instructions, and if the funds are not redeemed you get the money back. Check it out today!

The New York Office of the Attorney General (AG) wants to take a closer look into the business operations of...