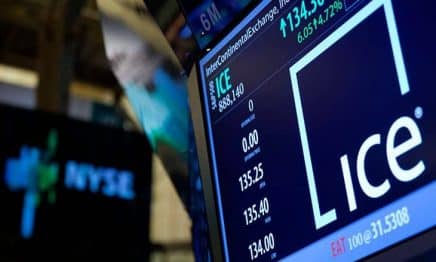 Intercontinental Exchange, the parent company of the New York Stock Exchange, is in the process of developing a cryptocurrency trading platform, according to the New York Times.

The report cites four sources who asked to remain anonymous, and emails of confidential plans. Reportedly, ICE has “had conversations with other financial institutions” about setting up the new business and the trades will take the form of swaps.

A swap transaction is when two parties exchange complicated financial instruments, based on a cash value which is not usually exchanged. The most common type of swap is an interest rate swap. Because of the complexities involved, these transactions mostly take place between businesses, and not through an exchange. However according to the article these swaps “will end with the customer owning Bitcoin the next day” – the firm has no comment to offer at this time.

This is newsworthy because of the size of the company involved.

Founded in 2000 with the backing of several of the world’s biggest banks, ICE owns and operates 23 different regulated currency exchanges throughout North America and Europe. It purchased the NYSE in 2013 and is now worth $40 billion. It has offices in New York, London, Winnipeg, Amsterdam, Tel Aviv and Singapore.

Significantly, swap transactions fall under the jurisdiction of the Commodity Futures Trading Commission, meaning that if the contracts take this form they will be completely legal. It is safe to say then that this would lead to more financial companies beginning to offer Bitcoin-based contracts.

This is the latest example of an American financial institution becoming interested in cryptocurrency. The two major futures exchanges of Chicago added Bitcoin to their menus last year (futures are transactions executed after a pre-arranged delay, sometimes of years), and last week the major investment bank Goldman Sachs began handling financial derivative products linked to Bitcoin, although only for very wealthy customers.

Two of the country’s biggest investment funds (Soros Fund Management and the Rockefeller Foundation) have also taken an interest in the new asset.

Bitcoin inventor Satoshi Nakamoto, where-ever he is, is also unlikely to be enthused by such developments. Bitcoin was designed to circumvent these companies and their financial games; the Bitcoin genesis block was coded with a hidden message: “The Times 03/Jan/2009 Chancellor on brink of second bailout for banks”.