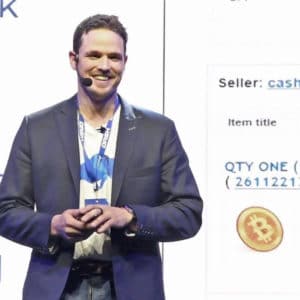 An interview with Polymath CEO Trevor Koverko is a slightly surreal experience. I’ve had meetings with key political figures that were easier to coordinate–and without having to cut through a swathe of adoring crowds requesting to take selfies with crypto’s man of the moment. So, what is it that’s got everyone talking about Trevor Koverko? Quite a few things actually.

CoinCental’s Christina Comben squeezed a few minutes of Trevor’s time at the World Blockchain Forum in London, and here’s what we found out.

Active in crypto since the early days and buying his first Bitcoin on eBay, Trevor is famous for investing in early ICOs, including MasterCoin, Ethereum, ShapeShift, and EOS. Before that, he was in Silicon Valley and Wall Street.

And before that, he was a hockey player, making the NYR Draft Pick. Now he’s committed to presiding over what he sees as the “biggest and best-kept secret in crypto right now”–security tokens.

What’s So Exciting About Security Tokens?

Perhaps a better question to ask is–what is a security token? “It’s very simple actually,” he says, “security tokens represent an ownership in an asset, which could be LP shares, or whatever, and it’s just a tokenized version of it… You have investors who expect profits, not that expect a product, and you have regulation and KYC.”

Right now though, there are hardly any security tokens since it’s an overly complex and cumbersome process to create them. On top of that, there are no exchanges that list security tokens, so once you have issued yours, you’re pretty much fresh out of options.

“Binance and all these other big exchanges have lots of liquidity,” he says, “but security tokens don’t because as soon as you trade one security on your exchange, you become under the purview of the regulators and the SEC. Everyone avoids listing securities. Now, there’s all this pent-up demand for security token liquidity and nowhere to go.”

And that’s what excites Trevor the most about the Polymath platform that will launch the next generation of security tokens. “Polymath is empowering trillions of dollars of financial securities to effortlessly migrate to the blockchain,” he says.

Polymath has a lot of support, having amassed the biggest security token community on the planet, capping out Telegram with 50,000 group members. This is important, he says, since it will allow them to establish network effect fast.

There are plenty of reasons to tokenize financial securities, from releasing liquidity to creating 24/7 availability. But according to Trevor, the most exciting part is the programmability of tokens:

“With smart contracts and securities tokens you can program them to do things, proxy voting, corporate governance, you can do so much more than with paper contracts sitting gathering dust in a filing cabinet… You can eliminate your whole back office.”

Polymath has some ambitious plans, in fact, they aim to be the “Ethereum of Security tokens.” Just as Ethereum made it easy for developers to launch IPOs, Polymath is making it easy for non-technical Wall Street folks to launch STOs. By simply using their platform, issuers can launch their own security token with a few clicks (without having to understand Solidity).

“IPOs are messy, expensive and time-consuming,” he says, “blockchain is going to change all that.” With an advisory team unrivaled anywhere else, Polymath has the backing of Overstock’s Patrick Byrne, ShapeShift’s Erik Voorhees, and Ethereum co-founder Anthony Di Iorio, among other industry heavyweights. What Type of Issuers Is Polymath Attracting?

“We’re open source distributed,” he explains, “and it’s very important for me having it where we don’t make decisions for people. We’re not an issuer, we just give them tools to help them be compliant in whatever jurisdiction they’re in, whatever class their investors are, and what type of exemption they’re doing, like how they’re raising the money. Is it a US type exemption? Is it a full prospectus? We help people navigate through that process.”

Some of the first Polymath issuers have been announced however and they include IPwe, the world’s first blockchain-enabled patent registry, and BlockEstate, a tokenized US real estate fund. Trevor also made an announcement live at the conference to say that one of the first issuers is a filmmaker raising funds for his movie through an STO.

The Atari movie features Nolan Bushnell, the founder of Atari and it’s going to be produced by Leonardo DiCaprio.

How Did Trevor Koverko Get into All this?

When asked about his first Bitcoin moment, a wry smile crosses his face. “Back then it was a cult of a very specific type of person,” he says. “It wasn’t mainstream yet. The first wave was not technology people. It was more economic geeks and people in those circles. That’s guys like Roger over there [he points to an informally dressed man in the corner of the press room].

“He was the first real guy. He’s the first person that came from the Libertarian Movement. Guys like Erik Voorhees. It was very small. I remember the conferences were in a little tiny room. We would all just hang out. No one was in it for the money back then. It was like a secret society. It was nerdy. We thought we were cool, but we weren’t,” he laughs, eyes misting over just a little.

“Everyone was younger, this was like a decade ago. We just grew up in the space together. Then it went mainstream and exploded. We didn’t expect that. I get nostalgic because back then it was very pure and authentic. No one was bandwagon jumping. People actually believed in what Bitcoin and crypto were about.”

But Security Tokens Will Leave a Lot of People Out

If Trevor wasn’t in it for the money, but for the ideal, is it strange that Polymath’s issuers will mainly be limited to accredited investors? Or that the financing for Polymath was not through an ICO but limited to a closed group of people? Does he feel that he’s in conflict with the Utopian society he talked about? Somewhat. But he isn’t losing sleep over it.

“There are a couple ways I think about that question. We have our core belief of crypto being open, decentralized, and anonymous like we believe in that, but we also have to compromise some of those things to really make an impact. If we want to go mainstream and we want to really help people at scale, we have to follow the rules and you have to do things compliantly and correctly.”

In the US at least, STOs will in the most part be open to accredited investors what are his thoughts on this? He doesn’t like it very much. “Is it fair that only rich people are allowed to invest in exciting new businesses? I personally don’t think that’s fair. I think that these rules need to be updated. Just because you have money doesn’t mean you’re an intelligent investor. That means you have money.

People who don’t have money, look at Ethereum. Ethereum created a lot of wealth for a lot of non-accredited people. If the government said, no, you’re not allowed to invest in Ethereum, that only the big institutions and wealthy people were brought in, then I don’t think that’s fair.”

However, in these changing times, he believes that changing regulation will come. “There’s already a move to this with the Jobs Act and different exemptions that are coming out, which is encouraging. We have a global mindset too, so we don’t just look at the US and Europe. It’s an open canvas and anyone can customize it for their particular situation. Not unlike Ethereum itself.” What Other Challenges Lie Ahead?

How will Polymath enable issuers to comply with the rules of the SEC or ensure that their security tokens stay secure? He pauses for a moment and says:

“Okay, so we don’t do a lot of things. We like to focus on what we’re good at. What we’re good at is creating the technology layer for programmable equity. Instead of just a share certificate that’s collecting dust in your filing cabinets, you have a token that lives on the blockchain that you can command to do things. You can have modules. I guess what we do at Polymath is we have different modules for KYC to streamline that process.”

So, right now, when it comes to KYC or managing the security of your security token, Polymath is not your one-stop shop just yet, although, “some things are in the pipeline,” he says. There are also a whole bunch of legal gray areas such as what happens after the STO and where security tokens sit on a company’s balance sheet.

“That is what we need help with,” he says. “Things like custody, things like exchanges. There’s still not a ton of liquidity for security tokens. That’s a regulatory problem because there are lots of utility token exchanges that are like eBay. They just trade products like a utility token which is not a security.”

When Is the Change Going to Happen?

When will securities tokens start to dominate the scene and dwarf the blockchain universe? “This is happening now. This is the inflection point. This quarter, I think this is where it all happens. It’s been winding up for a while and now we’re seeing the fruits of all hard work everyone’s been doing. It’s a very community-driven effort and that’s what I like.”

How much of a place does he see for utility tokens moving forward? “Oh, a lot. We love utility tokens, that’s what started it all and we’re just piggybacking off the tech that the utility token created. I just think it’s going to consolidate and there’s going to be a lot of mergers and deaths and corpses and we’re going to see a few of the big protocols emerging get bigger and the network effects they’re going to take hold. Then the security token will be a steady increasingly marching phenomenon.”

Security tokens are on the rise… are you ready?

Unbeknownst to a majority of crypto-enthusiasts, one of the most exciting features of the recently-implemented Lightning Network is one of...