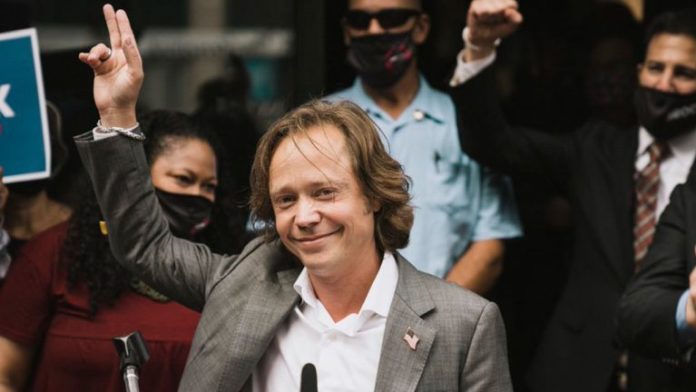 Former Disney child actor and U.S. Presidential candidate, Brock Pierce, was served with a lawsuit during a political campaign event held on Monday. The class-action lawsuit was filed in May and it claims the defendants, including Pierce, sold unregistered securities during the EOS initial coin offering (ICO).

Last May, a class-action lawsuit on behalf of any person who purchased or received EOS tokens during the June 2017 ICO was filed against a number of firms and company executives behind the EOS project.

The lawsuit named Brock Pierce, but also Block.one cofounders Daniel Larimer and Brendan Blumer are named as defendants too in the matter. The complaint says that Pierce alongside other Block.one leadership is “accountable for duping global investors in what may be the biggest of all crypto frauds.”

Moreover, the court filing details that Block.one operated in Hong Kong and the state of Virginia, but it is registered in the Cayman Islands. Even though the startup did not register with the U.S. Securities Exchange Commission (SEC) or seek exemption from registration, it still sold 900 million EOS tokens.

The class action accuses the company and executives of “aggressively marketing to investors in the United States and other countries.” Ultimately the plaintiffs believe EOS “left investors with an unregulated asset that became virtually worthless.”

Meanwhile, on Monday the former child actor and now crypto billionaire, Brock Pierce, held a campaign rally in New York City. Later in the day, a video of the rally surfaced from the CEO of Typhon Capital Management, James Koutoulas, who is a member of the plaintiff’s counsel in the EOS class-action lawsuit.

In the video, Pierce is served with the court subpoena while he is greeting a number of political supporters in New York. Koutoulas tweeted about the entrepreneur being served during his rally.

“Our team served Brock Pierce for securities fraud at his rally in NYC,” Koutoulas said. “Pro tip- when you’re trying to avoid getting served for a multi B fraud case, maybe lay off outlandish presidential campaigns.”

As we progress in holding this conman accountable, feel free to reach out if you lost money after buying eos in the ICO or on exchange.

Pierce’s official Twitter account and campaign did not release a statement in response to the securities fraud allegations. Instead, Pierce thanked everyone for coming out to the campaign event in NYC later in the day. He also said he was “glad to see that [his] candidacy is being taken so seriously,” when his campaign story was featured on the front page of the New York Post.

Brock Pierce is also well known in the cryptocurrency space and his campaign website also details how he has raised billions of dollars during the crypto ecosystem’s early days. Pierce is also running against the hip hop star, Kanye West, who is campaigning for POTUS against the Republican incumbent Donald Trump and Democrat challenger Joe Biden as well.

Block.one was already in trouble with the SEC last year and the organization settled with the U.S. regulator for $24 million or 0.6% of the $4 billion ICO funds. “Institutional funds that were lied to by Block.one have a duty to all their investors – large and small – to take action against fraudsters and con artists,” said Koutoulas.

What do you think about Brock Pierce being served with a lawsuit against the EOS initial coin offering (ICO)? Let us know what you think about this subject in the comments section below.

Bitcoin has seen some incredibly strong price action throughout the past few days After establishing the region between $9,900 and...