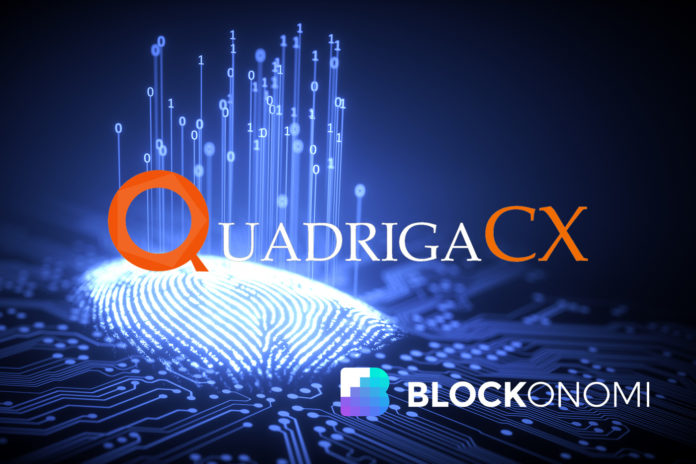 The suddenly deceased founder and CEO of QuadrigaCX cryptocurrency exchange was supposedly using his own personal funds to keep users’ withdrawals enabled after the bank litigated several accounts related to the exchange.

After the controversy with the missing funds that started with the sudden and unexpected death of QuadrigaCX CEO, Gerald Cotten, back on Jan. 14th, Cotten’s wife, Jennifer Robertson, published a statement on Scribd on Mar. 13th, where she shared details on her involvement in the case of the missing funds since her husband’s death.

In the statement, Robertson claims that the late QuadrigaCX CEO was allegedly using his funds to keep the exchange running after CIBC bank decided to freeze five different accounts that held $ 21.6 million.

Robertson further stated, that although her husband didn’t share details on how he was managing the exchange, Cotten did share with her that he is placing his own money into the exchange to compensate for users’ funds that were in the process of litigation.

Within the official statement published by Jennifer Robertson, the widow of the late CEO of Canada’s biggest cryptocurrency exchange, also shared that the company will no longer be cooperating with legal representatives that worked on the case of litigated accounts back in 2018. 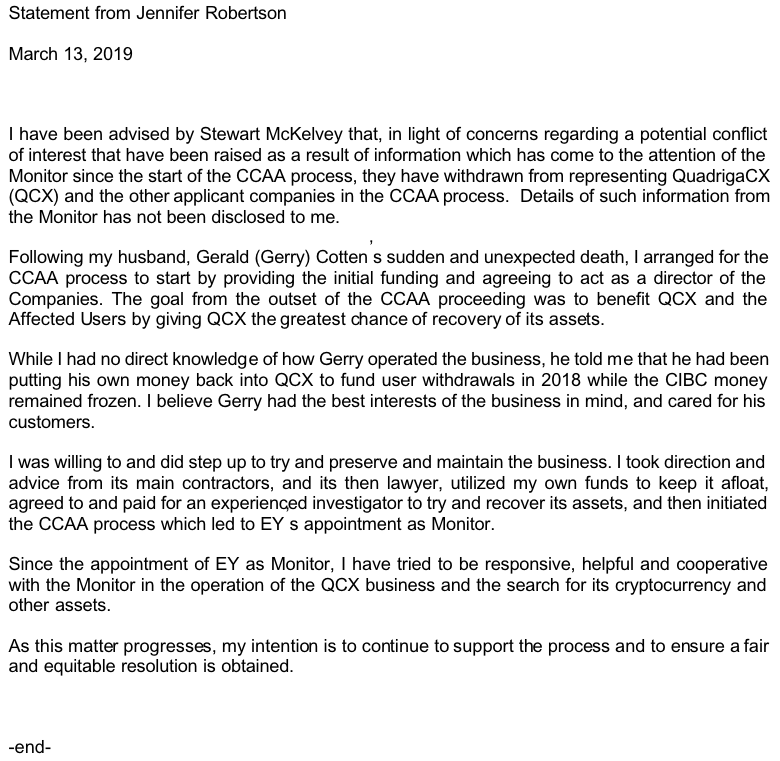 As a reason behind the decision of QuadrigaCX former representatives in the court, no details on the motives were further disclosed to Robertson; however, she emphasized in her recent statement that the team decided to withdraw due to the potential conflict of interest.

Back at the time when one of Canada’s largest banks, CIBC, decided to freeze some of the QuadrigaCX accounts to identify the owners of the litigated funds, the accounts that were in the process of litigation belonged to Costodian Inc, the exchange’s payment processor.

CIBC then soon had the court involved in the case of the frozen funds with the primary objective of determining to whom precisely the funds belonged to, while a part of the disputed funds was suspected of being in the ownership of 388 QuadrigaCX users.

The exchange insisted at the court that the litigation process was initiated by mistake, adding that the majority of frozen funds belonged to Quadriga.

At the time, the exchange was said to have financial difficulties as 2018 was a rough year for many crypto-related businesses, due to the bear trends in the market, which made the case suspicious to users.

In the meanwhile, Cotten’s widow claims that the late CEO cared for his users, which is why he was mixing his funds with users’ deposits. However, opinion on Reddit seems to be along the lines said by Redditor bitwise_ranger:

“Needless to say, the claim that a CEO in charge of the funds of over 115,000 traders was ‘caring’ for traders whilst, at the very least negligently, being responsible for financially ruining many of their lives, is just a little bit rich in our humble opinion.”

Twitter users don’t seem to be any less disappointed in the way QuadrigaCX 190 million dollars scandal is unraveling, while Canadian cryptocurrency holders are already looking for more secure alternatives in exchanges such as Coinbase:

@coinbase When the recent QuadrigaCX debacle, Canadians are in dire need of a new, trustable and simple platform they can sell their cryptos to fiat on.

As CCAA and Ernst & Young, working as a court monitor, are still investigating the case of the missing funds, trying to retrieve all users’ cryptocurrency and assets, Robertson asked the court earlier in March to provide a compensation of 225,000$ that she used from her funds to cover all legal expenses.

As requested by the legal firm representing the users of QuadrigaCX that had reported missing funds, Cox & Palmer, Robertson should not be entitled to the requested repayment until Ernst & Young provide information on Cotten’s estate regarding transactions and all assets.

Still, Robertson concluded the most recent statement published almost two months after the death of QuadrigaCX CEO, that she is to remain involved in the process of retrieving and locating the missing assets involved in the scandal, also adding that she is cooperating with CCAA and the court monitor in order to come to the bottom of the case as soon as possible.