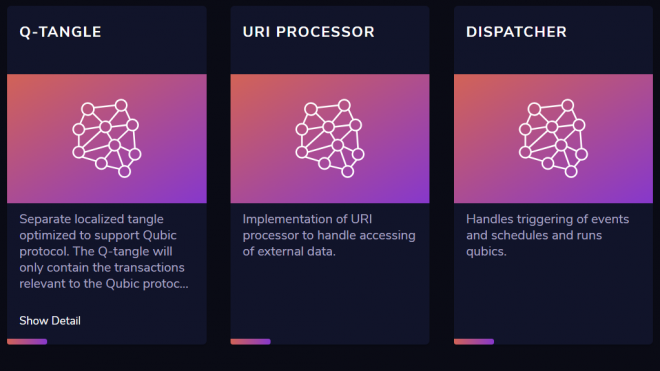 Qubic originally stemmed from the acronym QBC, which stands for quorum-based computing. While the project has taken on a life of its own, it was created as an IOTA protocol to bear the load of the heavy, quorum-based lifting. This includes constructs like smart contracts, oracle machines, and outsourced computations, all designed to build an IOTA-based world supercomputer.

Most roadmaps showcase a chronological “road” with detailed blurbs highlighting the milestones along the way. Building a business in the technology industry is hard work, and like all businesses, unforeseen obstacles await at every turn.

This leads roadmaps to being updated frequently, or scrapped altogether in favor of more accurate versions.

Qubic is quite open with the fact that their roadmap is changeable, and instead of estimating hard dates for the steps they take, the design of their roadmap simply shows boxes for each project with a “loading bar” denoting their current progress.

An snapshot of Qubic’s roadmap

Qubic states in certain terms that “this is not the final road map by a long shot.”

The IOTA mission is an ambitious one, and Qubic was established as the backbone of the project. The recently released roadmap gives us a glimpse of what the future might hold for IOTA holders, and also for the progression of technology as a whole.