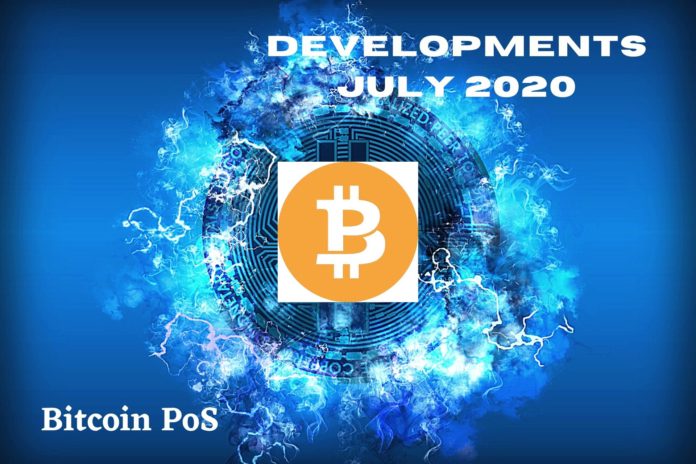 There have been several developments within the Bitcoin Proof of Stake community. The first one is an upgrade to the wallet. Upgrading to the Bitcoin PoS Core 0.20.0 is mandatory. The wallet can be accessed on GitHub. It comes with Bitcoin Core 0.20.0 integration.

The 0.20.0 version is the 20th upgrade of the Bitcoin Core wallet since its launch over 11 years ago. Over 100 contributors oversaw the development of this wallet during the past six months. The main areas targeted in this upgrade are the hardening of the Bitcoin Core code-base. Upgrades have also been made to the hardware wallet integration as well as improved network reliability.

One of the most notable changes in the wallet is the advancement of the hardware wallet integration GUI. Hardware compatibility has been possible since the 0.18.0 upgrade. However, it was still not possible to make transactions using a hardware wallet from the Bitcoin Core GUI. Instead, users had to rely on a command-line interface.

The 0.20.0 upgrade has changed all that. User can now create transactions without signature in the GUI using the partially signed Bitcoin transaction (PSBT) format that they can copy to their clipboard. Once it is copied, it can be transferred to the hardware wallet for signing. However, the process is not automated and broadcasting will still require the use of a command-line interface.

Another upgrade is to the network connectivity. The Bitcoin Core team included a new configuration option called Asmap that will be used to map IP addresses by Autonomous System Numbers (ASNs). It ensures that the node can connect with peers from different autonomous systems, which will reduce potential bottlenecks in the network. It helps to reduce the risk of specific data being withheld.

Another important upgrade is the removal of the Reject Messages (BIP61). These are notifications returned by a node when a transaction is rejected. It usually includes the reason for rejection. The developers do not think the messages are useful because when a node doesn’t receive a message, it usually means that the transaction was rejected.

As a result, the usefulness of such messages are limited. There are already better solutions to check if a transaction has gone through. The messages were also making the P2P more complex while also using up bandwidth. While the messages were disabled by default from the 0.18.0 upgrade, they have now been completely removed.

Another feature that has been removed in the new wallet is the Payment Protocol (BIP 70). The protocol was designed to improve the payment experience. However, the standard never received widespread adoption. Most people still prefer the simpler URI system (BIP21). A clickable link or QR codes communicate various other details such as the address and the amount.

Besides the lack of adoption of BIP70 Payment Protocol, it also had major security and privacy issues. The main issue was with the OpenSSL software library. AS a result, the team rejected the protocol altogether.

Besides these general upgrades, the Bitcoin Proof of Stake team made some adjustments of their own. For one, the difficulty adjustment mechanism has been upgraded to reduce block time volatility. The adjustment will begin on block 130K. Additionally, stability issues have been fixed in wallets that have conflicted transactions as well as other stability issues.

The BPS coin is now listed on the Bilaxy crypto exchange. More listings on major exchanges are expected soon. Additionally, the coin is listed on CoinGecko.

Exchange listings are always a major deal for any coin. They are usually a sign that the coin is maturing. Besides that, this makes it easier for users to buy and sell coins, which helps to grow the liquidity of the network. Listing on CoinGecko will help to grow public awareness of the coin and help to grow its user base.

The Mission of Bitcoin Proof of Stake

While the Bitcoin core network has numerous flaws, certain aspects need to be preserved. By combining the best of what Bitcoin core has to offer with the efficient, scalable, and flexible PoS mechanism, BitcoinPoS is expanding with what is possible with crypto. Bitcoin Proof of Stake can do everything Bitcoin was designed to do while bringing major upgrades that will ensure crypto survives in the future.

Visit Bitcoin Proof of Stake at https://www.bitcoinpos.net
Follow the project on social media channels to keep up to date on all
things BitcoinPoS!

Bitcoin has rallied by more than 150 percent from its mid-March nadir, but its growing exposure to a similarly booming...