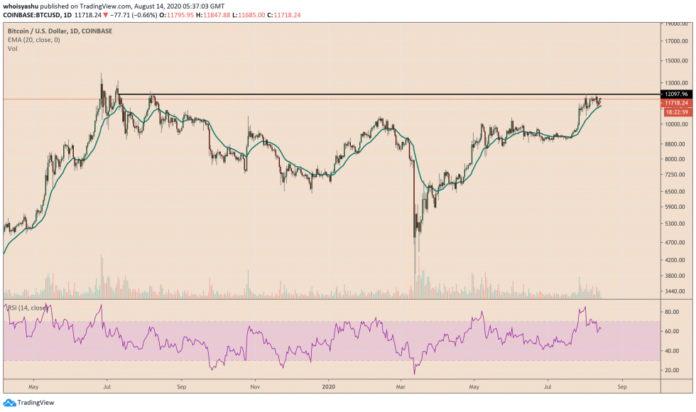 A fractal that, on its last appearance, sent the Bitcoin price up by 140 percent flashed again this quarter.

According to a report by Kraken – a US-based crypto exchange, the cryptocurrency’s realized volatility in late July fell to 22.8 percent. The last time the readings were that low was in October 2018. Two months after that, Bitcoin bottomed near $3,120, which followed a 329.63 percent rally in the later quarterly sessions.

In retrospect, Realized Volatility reflects an asset’s magnitude of daily price movements over a specific period. It does not necessarily predict the future market trends but weighs heavily on how traders react around higher or lower price fluctuations. So far, Bitcoin traders had inclined towards buying the cryptocurrency when its realized volatility goes down.

It points towards an imminent price rally ahead. Noted market analyst Lark Davis stressed the same in his latest tweet.

“Bitcoin’s annualized volatility bottomed at 22.8% in late July, historically such a bottom has led to an average 140% price rally, which would make BTC around $23,000 by the end of the year.”

The statements come after a rally in Bitcoin, now up more than 60 percent against the US dollar on a year-to-date timeframe. Meanwhile, the cryptocurrency is trading almost 200 percent higher from its nadir in March 2020, showing a credible long-term uptrend bias in the coming sessions.

Observers note that a collapse in the US Treasury yields, coupled with an underperforming US dollar, increased the appeal for safe-haven assets in the last six months. As a result, gold and Bitcoin both rallied in tandem even though they don’t promise a guaranteed yield.

US bond markets expect to underperform further into the yearly session. It is because of the Federal Reserve’s commitment to maintaining near-zero interest rates against a gloomy US economic outlook caused by the COVID pandemic.

Ronnie Moas, the founder of Standpoint Research, stressed the Bitcoin’s possibility of cracking over $20,000 as long as the Fed keeps the fear of inflation higher. The macro analyst mentioned MicroStrategy, a public company, that bought $250 million worth of BTC to protect their reserves from inflationary bias, adding:

Bitcoin was trading near $11,750 at the time of this writing. It was attempting to close above $12,000 to establish a short-term bullish bias.

Photo by SpaceX on Unsplash

Coinmarketcap (CMC) temporarily went offline Thursday, August 13 and normal service only resumed some hours later, but not before inconveniencing...