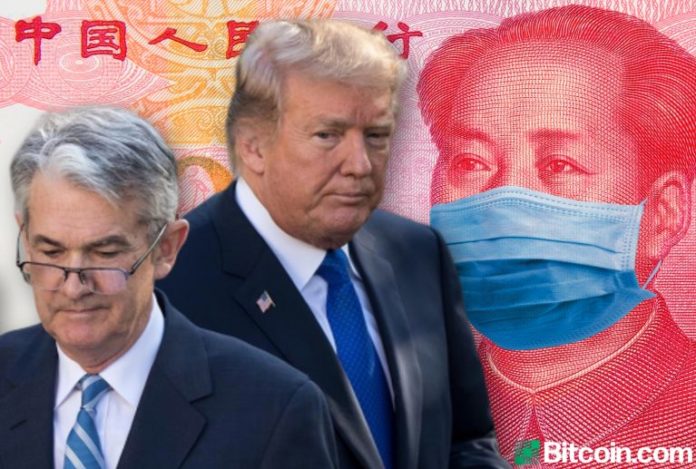 It has been a busy week for the U.S. government trying to regulate the crypto space. Perceiving cryptocurrency as a threat, President Donald Trump proposed a few measures to increase oversight of the industry in his new budget. He wants to return the Secret Service to the Treasury “to create new efficiencies in the investigation” of crimes, including those involving cryptocurrencies. He also proposed a budget of $127 million for the Financial Crimes Enforcement Network (FinCEN) “to combat emerging virtual currency and cybercrime threats.”

Also last week, Federal Reserve Chairman Jerome Powell testified before the House of Representatives Committee on Financial Services and Treasury Secretary Steven Mnuchin testified before the Senate Finance Committee. After answering questions about a digital dollar, Powell said “The idea of having a ledger where you know everybody’s payments is not something that would be, you know, particularly attractive in the United States context. It’s not a problem for China.” Mnuchin revealed that the Treasury will soon release new crypto regulations to increase transparency. Independently, the president of the Federal Reserve Bank of Minneapolis, Neel Kashkari, called bitcoin and other cryptocurrencies “a giant garbage dumpster.” While the Department of Justice (DOJ) is criminalizing onchain privacy starting with mixers, the U.S. Office of the Director of National Intelligence is seeking researchers to determine how cryptocurrency could undermine the dollar as the world’s reserve currency. The director is the head of the Intelligence Community comprising 17 agencies, including the Federal Bureau of Investigation (FBI), the Central Intelligence Agency (CIA), the Department of Homeland Security (DHS), and the National Security Agency (NSA). In addition, the U.S. is auctioning over 4,040 seized bitcoins, currently worth approximately $40 million.

In the financial sector, token projects may see a sign of relief from the U.S. Securities and Exchange Commission (SEC) as crypto-friendly Commissioner Hester Peirce has unveiled her “Token Safe Harbor Proposal.” It is designed to give token projects a three-year grace period before deciding whether they involve the offering of a security. Meanwhile, the pro-crypto presidential candidate Andrew Yang has dropped out of the race to become the president of the United States.

Soon after the U.S. Internal Revenue Service (IRS) started accepting tax filings this year, it modified the text of a page on its website which details the tax treatment of cryptocurrency. The agency announced on Feb. 14: “The IRS recognizes that the language on our page potentially caused concern for some taxpayers. We have changed the language in order to lessen any confusion.” The topic of confusion is in-game currencies. Previously, the IRS listed “bitcoin, ether, Roblox, and v-bucks” as examples of a convertible virtual currency. However, it quietly removed everything except bitcoin last week. The tax authority clarified:

China is currently combating the coronavirus which has killed more than 1,500 people and infected more than 66,000 people in the country. The government is now scrubbing and quarantining banknotes to stop the spread of the deadly virus by touching the bills. The central bank, the People’s Bank of China (PBOC), explained that banks use ultraviolet light or high temperatures to disinfect yuan bills. They are then sealed and stored for seven to 14 days, depending on the severity of the outbreak in a particular area, before being recirculated.

As for the impending launch of a central bank digital currency, the PBOC has reportedly filed 84 patents relating to its digital yuan. “Virtually all of these patent applications relate to integrating a system of digital currency into the existing banking infrastructure,” patent attorney Marc Kaufman commented. More than 40 financial institutions in Germany have reportedly declared to the Federal Financial Supervisory Authority (BaFin) that they are interested in offering cryptocurrency custody services under the new German law. The law implementing the amendment to the Fourth EU Money Laundering Directive entered into force on Jan. 1.

The regulator told news.Bitcoin.com that financial services companies as of that date must submit their intent to apply for a license by March 31 and complete a license application by Nov. 30. The length of time it takes for an applicant to be granted a license depends on the individual case.

The Australian Transaction Reports and Analysis Centre (AUSTRAC), the country’s financial intelligence agency and anti-money laundering regulator, has confirmed to news.Bitcoin.com that it has registered and enrolled 312 digital currency exchange providers.

“Since April 2018, AUSTRAC has regulated digital currency exchange providers to minimize the risk of criminals using them for money laundering, terrorism financing and cybercrime,” a spokesperson for the regulator said. Earlier this month, the government’s premier policy think tank, Niti Aayog, released a report identifying key blockchain use cases in India. It followed a report entitled National Strategy on Blockchain, compiled by the National Institute for Smart Government as directed by the Ministry of Electronics and Information Technology (MeitY). It calls for the central bank, the Reserve Bank of India (RBI), to issue a digital rupee. Moreover, the Telangana state government has launched a blockchain accelerator in partnership with Tech Mahindra and IBC Media.

While the Indian government has not made a decision on whether to regulate or ban cryptocurrencies in the country, Prime Minister Narendra Modi recently awarded a young entrepreneur for her work on a cryptocurrency app. Additionally, the supreme court has yet to announce its verdict on whether to lift the banking restriction imposed on crypto businesses by the RBI. The court wrapped up hearing the arguments against the ban several weeks ago and has reserved judgment on the case.

The Swiss Financial Market Supervisory Authority (FINMA) has published a proposal for a follow-up crypto regulation. It proposed amending the client identification threshold values in its Anti-Money Laundering Ordinance from CHF 5,000 ($5,092) to CHF 1,000 for crypto exchange transactions. FINMA says it’s “acknowledging the heightened money-laundering risks in this area.” The regulator is holding a consultation on this follow-up regulation until April 9.

What do you think of the crypto regulatory developments covered in this roundup? Let us know in the comments section below.

Images courtesy of Shutterstock and the Financial Times.