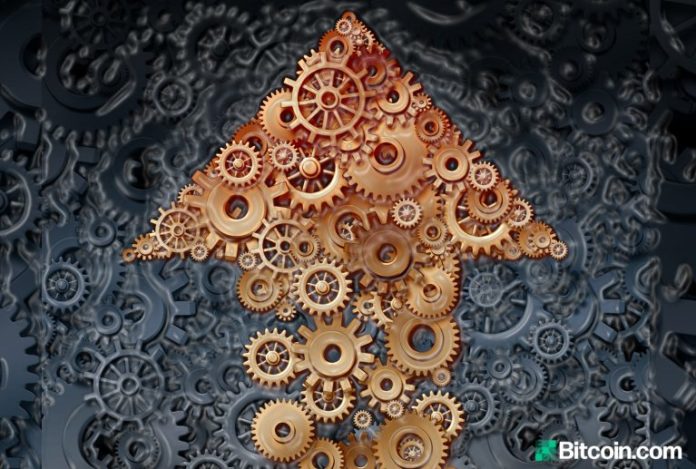 Coinshares and cryptocurrency corporation Circle have recently published very detailed research reports concerning the digital asset space over the last six months. Over the last few weeks, the market capitalization of all cryptocurrencies has ranged between $250-300 billion. The U.K.-based firm Coinshares’ H1 report says that the last six months should be considered a net positive for the young industry. “The continuing professionalisation of the protocol services and corresponding technologies has been impressive and most assets have reacted by recovering substantially from last year’s brutal bear market,” explains Coinshares’ H1 study. It notes that there’s been “no shortage of speculation” when it comes to people guessing what’s driving the rally.

The research also shows that retail interest in BTC is “relatively tepid compared to 2017.” This makes Coinshares’ believe the H1 recovery was “largely driven by the long-awaited entrance of institutional money.” The firm says that the company’s sales division has “anecdotal evidence” that supports the institutionalization theory. Coinshares mentions financial incumbents like Fidelity and the Intercontinental Exchange (Bakkt) as institutional examples. Moreover, in terms of legitimizing the industry, the company’s report also highlights Facebook’s Libra coin attempt. The report’s authors opine that even though the digital currency may be centralized, it could be beneficial.

“While Libra is centralised, permissioned, trust-based, not censorship-resistant, not scarce, and arguably not even a cryptocurrency at all (though this term is poorly defined),” Coinshares’ H1 report notes. “It does offer potential benefits to the world’s unbanked that currently don’t have access to services we take for granted in the West, such as online shopping.”

congrats to @Bakkt on the beta launch of their physically settled bitcoin futures contract!

the market for bitcoin is changing, and quickly. futures, derivatives, and synthetics will fundamentally change the nature of the bitcoin market. see below what happened to gold 👇 pic.twitter.com/PI8KKadjFY

Circle’s 80-page report is far more in-depth, and also notices the growth of institutionalization within the crypto space. The company’s research says that some notable signs of institutional interest stem from data like inflows into Grayscale’s products and CME’s futures open interest and trade volumes reaching all-time highs. To Circle’s researchers covering 2019’s Q2, the announcement from Facebook was a watershed moment for some people although others have been skeptical. As far as stablecoins are concerned, the company said it witnessed its own USDC regulated stablecoin market cap rise a great deal.

“Grayscale recently provided a second-quarter update, showcasing continued strength since market lows at the end of 2018,” Circle’s report notes when researching the distinguishing signs of institutionalization. “Assets under management were up 125% quarter over quarter (q/q), driven by an increase in underlying prices, among other factors. The portion of inflows from institutional investors has been experiencing step function growth, rising from 59% in 3Q18 to 84% in 2Q19 — Grayscale notes this figure was dominated by hedge funds.”

As far as CME Bitcoin futures interest, Circle notes that Gareth MacLeod, partner at Gryphon Labs, suggested that the recent surge in CME’s crypto futures volumes is likely due to “traditional finance taking a greater interest in bitcoin.” Circle’s research also claims that defining regulatory developments may be strengthening institutionalization within the cryptoconomy.

After the rise and fall of ICOs, the new trend Circle sees is the “rise of exchange tokens.” Exchange tokens are sold similarly to ICOs but are exclusively used on the trading platform for various benefits like discounted trading fees, rewards, governance systems, and token burns. The researcher highlights 2019’s prominent exchange tokens including Binance (BNB), Huobi (HT), Coinflex (FLEX), and the LEO token launched by Bitfinex. Even though these tokens are slightly different to the prior ICO model, Circle researchers say that the issuers may face regulatory hurdles. “A major challenge that exchange tokens face is around how they should be classified by regulators — as utility tokens or security tokens,” the authors of Circle’s Q2 study remark. 2019 saw a bunch of seed funding rounds and venture investments into crypto-based companies according to Circle’s study. This includes startups like Sparkswap ($3.5 million), Cambridge Blockchain ($3.5 million), Flexa ($14.1 million), Chainalysis ($6 million), and Celo ($25 million). The 80-page report also underlines subjects like the number of funds involved in cryptocurrency staking. According to Circle’s study, there’s $6.5 billion worth of digital assets locked up in (proof-of-stake) staking networks. Circle notes that the increase of staking this year is driven partly by projects like Cosmos and V Systems.

Additionally, Circle measured the activity of decentralized applications (dapps) and found there were +43 added per month in 2019 on Ethereum and +16 on the EOS network. Circle’s research also shows that there’s been increasing trade volumes on noncustodial exchanges as this metric has increased by 32% q/q. During the first week of June, Bitcoin.com recently launched a peer-to-peer, noncustodial BCH marketplace called Local.Bitcoin.com, adding another option to the slew of accessible noncustodial platforms introduced in 2019. Additionally, the report explains that there’s been an activity decline on both the Lightning Network on BTC and the declining dominance of ETH locked into the Maker contract.

Overall, both reports show there’s been a lot of cryptocurrency activities and positive outlooks throughout H1 and a good score of steady growth increases quarter over quarter. Coinshare’s report underscores that “nothing is certain in this space and things often feel like they move at a breakneck pace.” However, the company looks forward to seeing what the next half of the year brings. Circle’s research also shows a net positive for 2019’s Q2 and it will be interesting to see if the cryptoconomy’s action and the underlying network development behind these projects continue to rise in H2.

What do you think about the overall activities and market action of the cryptoconomy in H1 2019 described by Coinshares and Circle’s reports? Let us know what you think about this subject in the comments section below.

There is a subtle shift happening within the cryptocurrency space. While the price of Bitcoin (BTC) continues to soar, blasting...