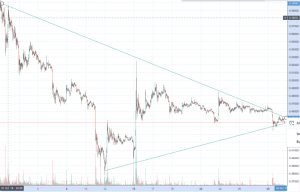 Ripple has managed a slight recovery following a brief price drop on October 29. With trading volume still anemic, Ripple XRP investors may expect further sideways action in the coming days. If Ripple was to fall beneath $0.45 for more than 24 hours, prices in the $0.42-$0.43 range could be seen, with $0.40 providing a new resistance level. Prices lower than $0.40 were momentarily seen in early October.

We’ve covered time and again Ripple’s achievements in global finance. Now a standard payment rail network for banks like Santander, PNC, and the Royal Bank of Canada, Ripple is also relied upon for remittance networks like Western Union and MoneyGram.

These advancements haven’t translated into sustained price increases for Ripple XRP. While this is annoying to investors who see the fundamental value of the network, does low value actually prevent the Ripple network from accomplishing its goals?

Despite price stagnation, Ripple XRP had a good sales period in Q3 2018. XRP sales were expanded 120% during this period, according to the XRP market report. The more people buy Ripple XRP, the more purposes it can serve as a store and transfer of value, across borders and within nations. But low Ripple prices prevent the network from expanding as it otherwise might.

David Schwartz, chief cryptographer and CTO of Ripple said, “When Bitcoins were sold for $1, you couldn’t really use them to buy or sell a house. You can now. Bigger transactions require bigger value. The higher the price of XRP, the larger the payments Ripple can target.”

This is an important point not often discussed in the crypto markets. While the Ripple market cap exceeds $17 billion, and there are more than 40 billion XRP in circulation, making large payments requires the transfer of huge quantities. It’s the digital equivalent to paying for a Tesla in mountains of pocket change. The Ripple network makes this possible, but the value of the XRP currency doesn’t make it entirely practical.

Despite this, much of Q3 Ripple sales went to institutional holders. $95 million in XRP went to institutions during the past three months, and another $70 million to private investors. These sales are about 300% higher than Q3 sales from 2017.

Ripple XRP prices are held down by the price of Bitcoin and the altcoins, more than any other factor. As long as the market lacks confidence in Bitcoin fundamentals, money won’t enter the space in a significant way. In the meantime, Ripple’s inroads with more and greater financial entities will give it fuel to see massive price gains once a wider market recovery sets in. However, it’s far from certain that Ripple could spark such a recovery on its own, even though, due to all of its recent achievements, it may deserve to.

*Information in this article should not be taken as investment advice.)

The post Ripple XRP Prices for Q3 and Q4 2018 appeared first on The Independent Republic.

Q: What is your name, and who do you work for? Jochen Renz, Advisor to the IOTA Foundation Q: What...