Following the conclusion of the Swell 2018 conference and the diminishing excitement that was revolving around xRapid, Ripple (XRP) has managed to return to the 0.52 US dollar level. According to some experts and analysts, the depreciation of price is seen as a concerted manipulation by the mother company, however, even after its recent surge, Ripple (XRP) still displays limited chances of rising to the 0.76 US dollar mark in the short run.

However, Ripple (XRP) still tops the list of the one of the best performing digital asset in the market in the past month, surging upwards from lows of 0.30 US dollars and managing to maintain parts of the gains. On the other hand, the digital coin was met with a lot of skepticism yet again reviving the debate that XRP is not critical to the operations of the Ripple payment network.

In the past 24-hours, Ripple (XRP) gradually depreciated from around 0.56 US dollars to 0.52 US dollars as of now, concluding the day’s trade volumes to about 877 million US dollars. The digital asset is extremely active on one of Japan’s famous cryptocurrency exchange, Bitbank, where more than 124 million US dollars’ worth of trading is located, against the Japanese yen.

Currently, Ripple (XRP) is standing at the third position in the list of most significant virtual currencies regarding Market Cap. At the time of writing, CoinMarketCap reports that Ripple (XRP) is trading at about 0.519 US dollars (-2.27 percent) with a market cap of 20.7 billion US dollars.

According to Binance, today’s high for Ripple’s default cryptocurrency, XRP, was at 0.57107 US dollars while its day’s low was at about 0.51 US dollars (XRP/USD Pair). Still, on the Binance platform, XRP’s performance is up by 0.15 percent from last week. Currently, Binance is among the leading crypto exchanges in the world that are assisting XRP in replacing Bitcoin in gaining the interest of Japanese traders and investors.

Ripple’s XRP has been nominated as the best virtual money to send and receive funds between exchanges by users, thanks to the speed and cost of transactions related to the virtual currency.

As you might know by now, Ripple (XRP) can settle cross-border settlements in less than 4 seconds with fees running up to about 0.00001 XRP’s per transaction. Considering that Ripple’s default currency, XRP is a settlement and liquidity digital asset, it can be used for settlements of unrelated currencies such as commodities and fiat currencies. 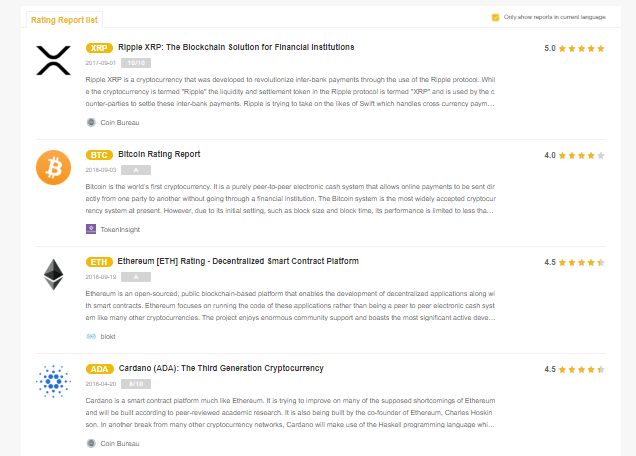 Binance Ratings have availed the information after the exchange incorporated the XRP/USD pair on their platform.

Other digital currencies that were competing against Ripple (XRP) are the likes of Bitcoin, Cardano, Ethereum, Litecoin, Zcash among other cryptocurrencies.

On the ratings, Ethereum and Cardano managed to garner 4.5 stars out of 5 stars while Bitcoin received 4 out of 5. AdToken was the least voted currency with two stars out of five. AdToken is a virtual currency of the AdChain project that incorporates a sequence of interoperable open protocols based on the public Ethereum blockchain.

Ripple’ XRP is undeniably one of the most significant digital assets in the crypto market today. Launched on 2nd February 2013, XRP has its total supply of digital coinage standing at about 100 billion coins with its circulating supply believed to be over 39 billion coins.

As stated earlier, XRP’s market capitalization stands just above 20 billion US dollars currently, with each coin exchanging at 0.519 US dollars. It is only Bitcoin and Ethereum that beats Ripple in the race of being the most relevant cryptocurrency in the market and with its introduction into the Binance platform and its high rankings by users there; only positive outcomes can be expected.

Bitcoin SegWit transactions increase to over 50%