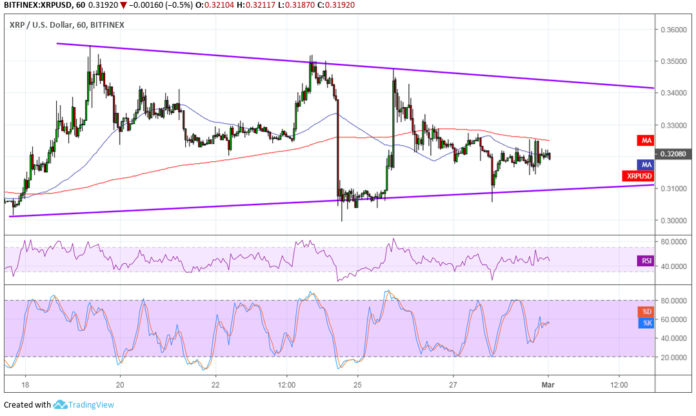 Ripple is back to consolidation action as it formed lower highs and higher lows inside a symmetrical triangle on the 1-hour time frame. Price is just bouncing off support and might be due to test the resistance from here.

RSI is turning lower without even hitting the overbought region. This suggests that sellers are eager to return even though buyers aren’t quite exhausted yet. Stochastic is pointing up to signal that there might be some bullish pressure left that could take price up to the triangle resistance again.

Ripple is still undergoing a period of low volatility as traders were likely drawn by the bigger moves in other coins for the past month. Still, the availability of Ripple on Coinbase Pro has actually led to higher volumes.

Doubts that Ripple paid Coinbase for its listing on the platform are likely keeping a lid on prices, with rumors originating from reports back in Q2 2018 that Ripple tried to “stimulate” XRP listings at two exchanges: Gemini and CoinBase.

Miguel Vias, the head of XRP Markets, is dismissing this bribing rumor as he tweeted:

“We’re happy to go on the record. Coinbase’s listing of XRP (also, not “our token”) was Coinbase’s independent decision – we did not give them anything to make it happen.”