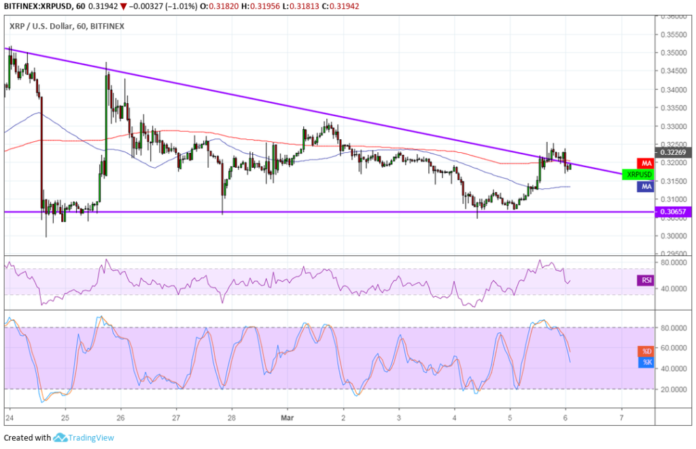 Ripple has formed lower highs and found support at the .3065 mark to create a descending triangle pattern on its 1-hour time frame. Resistance seems to be holding quite well so a move back to support might be due.

The 100 SMA is below the longer-term 200 SMA to indicate that the path of least resistance is to the downside. In other words, resistance is more likely to hold than to break. The 200 SMA also lines up with the top of the triangle to add to its strength as resistance.

RSI is heading lower to indicate that selling pressure is in play. This oscillator is on middle ground so it has some room to go before indicating oversold conditions. Stochastic is also heading south so price could follow suit until oversold conditions are seen.

Ripple appears to be behind some of its peers in joining the rallies over the past weeks, but the fact remains that bulls are defending support quite well. Although Ripple has been on solid footing with a good platform and several partnerships with big companies, there is some concern about other financial institutions launching their own digital assets to facilitate cross-border transactions.

Still, the company continues to make progress, the latest of which was Mercury FX executing a successful payment through xRapid. According to its tweet, this payment was completed on behalf of a client in the UK who needed to send money across the world to pay for his honeymoon:

“Mercury has just made history and completed the first ever commercial payment using #xRapid to the Philippines. The payment was made for an individual client to pay for his honeymoon at the @edgewaterdive Spa Resort in the Philippines.We are now open for business for company and individual payments to Mexico and the Philippines with #XRP.”