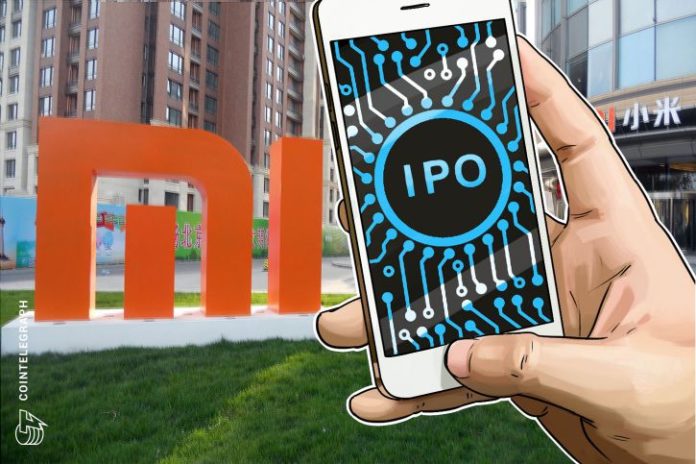 Blackmoon, which is a blockchain fintech company that establishes and runs tokenized funds, has reportedly offered Xiaomi to sell digitized tokens for its stock on a dollar-for-dollar basis. The payment options could include Ethereum (ETH), Bitcoin (BTC) or Litecoin (LTC). Blackmoon will ostensibly apply the income to subscribe to Xiaomi’s $4.7 billion IPO in Hong Kong, which will commence July 9 on the Hong Kong stock exchange.

Last week upon the expiry of a four-day offer period to retail investors that saw its shares overbought by 8.5 times, Xiaomi set the price of its shares at HK$17 ($2.16) each. This estimates the smartphone manufacturer at $54 billion, which is a half the initially sought value of $100 billion. The token price offered by Blackmoon is reportedly linked to the performance of Xiaomi shares. Sergey Vasin, Chief Operating Officer at Blackmood, said:

“The price of the Xiaomi token is determined by the IPO price of Xiaomi’s shares, with applicable fees. We only accept crypto, so it would be the equivalent amount in US dollars or Hong Kong dollars.”

According to Blackmoon, holders will be able to buy the tokens on a monthly basis. After redemption, Blackmoon will trade the Xiaomi stock in the portfolio equal to the value of tokens purchased. Token holders will subsequently get their investment in digital currency, though Blackmoon is reportedly working on payments options. Oleg Seydak, Chief Executive at Blackmoon, said that after conducting a poll on social media, it emerged that “many people said that they are interested in participating in the IPO through tokens.”

A Xiaomi spokesman told the South China Morning Post that the token sale offered by Blackmoon had not been yet been approved or endorsed by the smartphone producer, while Vasin declined to disclose the quantity of tokens sold. The tokens are not available in Hong Kong or mainland China.

Blackmoon is not the first token project that has piggybacked on the name or brand of a well known company. Earlier this year, the Alibabcoin Foundation won an injunction brought against the Dubai-based cryptocurrency by Chinese e-commerce giant Alibaba Group Holding. A judge in a U.S. court ruled against the lawsuit and accompanying restraining order, which accused Alibabacoin of copyright infringement and “prominent, repeated, and intentionally misleading” behavior using the company’s name.

Since the incredible bull run last year, early adopters, and even people who invested in cryptocurrencies back in January 2017,...