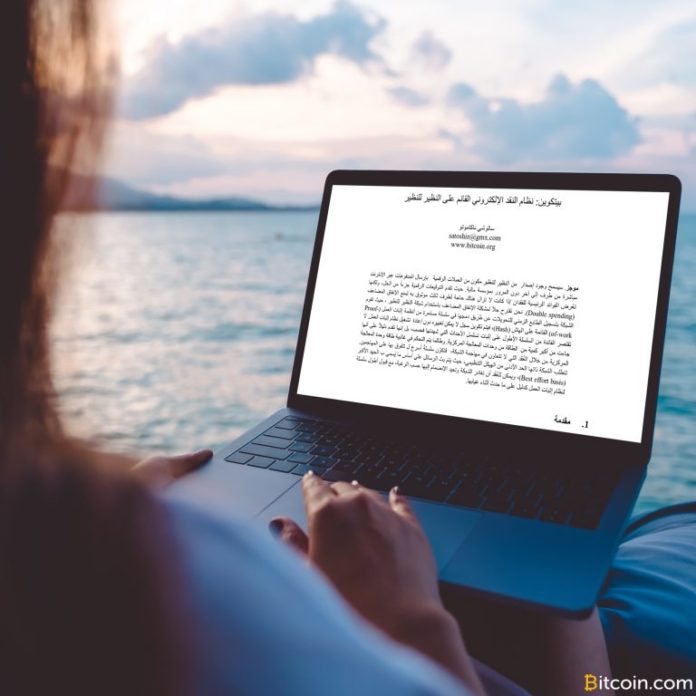 On Jan. 22, blockchain infrastructure firm Bitfury announced during the World Economic Forum in Davos that Satoshi Nakamoto’s Bitcoin whitepaper has been translated into Arabic and Hindi for the first time. The translations of the paper “Bitcoin: A Peer-to-Peer Electronic Cash System” can now be read by the millions of people around the world who speak these languages.

Satoshi’s Bitcoin whitepaper has changed the lives of many people and now the document has been translated into two languages for the first time — Hindi and Arabic. Both of these languages are very prevalent in our society and are read and spoken by millions of individuals across the world. For instance, India has 23 recognized official languages, but Hindi is by far the most popular. It is estimated that more than 420 million people speak Arabic in 30 different dialects. The critically examined translations were initiated by Bitfury, Coin Center, the author Saifedean Ammous, the Blockchain Trust Accelerator (BTA), and the Global Blockchain Business Council (GBBC).

According to Bitfury, the translation project started last summer and is a part of the company’s global education initiative. The plan is to translate Satoshi’s innovative paper into all languages with proper translation vetting. They started with Arabic and Hindi in order to encourage worldwide adoption and acceptance of bitcoin.

“Bitcoin is a global currency and groundbreaking invention, but its available educational resources are overwhelmingly aimed at English and European audiences — With these translations, we are making Satoshi’s white paper accessible to regions that are cradles of innovation and growth,” said Vlad Radysh, director of Bitfury’s educational initiative. “We believe that with this project more people will see bitcoin and blockchain’s transformative potential, and I hope they will be inspired to find new ways to harness this technology for good in their communities and countries.”

Satoshi’s whitepaper has been translated into many languages including Chinese, Spanish, Italian, Russian, French, German, Bahasa Indonesian and Swedish. Bitmain founder Jihan Wu is well known for being the first person to translate Satoshi Nakamoto’s whitepaper into Chinese. Early investor Roger Ver helped facilitate the translation of the whitepaper in Japanese.

Satoshi’s whitepaper has even been produced in braille for people with impaired vision. Translations are extremely helpful because it breaks the barrier of entry for millions of people around the world who are interested in learning about this innovative technology. Breaking language barriers can help people engage with each other and facilitate a better understand of how Bitcoin technology works.

As Manav Singhal from the Blockchain Foundation of India (BFI) noted during the announcement, “Growing the community of people who appreciate the value of the technology will help us reach those goals.”

Taproot Is Coming: What It Is, and How It Will Benefit Bitcoin

Bitcoin users may, before long, be able to benefit from a trick called “Taproot.” First proposed by Bitcoin Core contributor...